Co-founder and co-owner departs after 36 years at helm 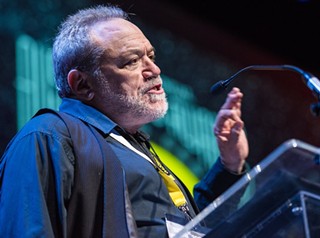 Louis Black at the 35th Austin Music Awards on March 12, 2017, at ACL Live at the Moody Theater (Photo by David Brendan Hall)

Chronicle co-founder and co-owner Louis Black announced in an internal email to staff this morning that he is leaving the paper effective immediately. "It has been a 36-year adventure, a remarkable experience, producing and editing a paper I am proud of beyond reason," Black wrote.

Black intended to announce his departure publicly in his final installment of Page Two, to be published on the 36th anniversary of the paper’s founding, but word got out and soon went public. So much for the Chronicle being a body that breaks news.

In his farewell letter, Black assured staff that he would work closely with Publisher Nick Barbaro on the transition process through the end of the year, and will continue to produce the Austin Music Awards. Otherwise, he intends to focus more heavily on other creative endeavors, particularly his two production companies, Production for Use and Louis Black Productions. Black's directorial debut dream is destiny, a documentary about filmmaker Richard Linklater, a favorite of Black’s in Chronicle pages through the years, debuts Sept. 1 on PBS.

Black concluded his letter to staff: "My best wishes and love of the paper as well as my deep appreciation of the whole staff continues unabated. Thank you all for such a splendid run, producing a great paper and helping to reflect, annotate, influence and comment on such an extraordinary community. May you continue to do so with brilliance, integrity, passion, knowledge and skill."