Three Billboards Outside Ebbing, Missouri, one of a slate of high-profile movies in the first wave of films announced for Fantastic Fest 2017

From world premieres to archive oddities; from the Arabic world to the rust belt; and from raucous laughs to nerve-jangling terror, the first wave of films for Fantastic Fest 2017 (Sept. 21-28) announced this morning has it all, including the wildly anticipated Three Billboards Outside Ebbing, Missouri.

Headlining the announcement is a quartet of new films from major and lauded directors. Takashi Miike's hotly-anticipated adaptation of megaselling manga Blade of the Immortal confirms Austin for its U.S. premiere. Yorgos Lanthimos, whose English-language debut The Lobster opened the fest two years ago, returns with The Killing of a Sacred Deer. Meanwhile fellow FF 2015 alum Ruben Östlund brings his Palme d'Or winner The Square.

Comparing it to Östlund's Force Majeure and the Oscar-winning, remake-bound Toni Erdmann, which played the fest last year, Fantastic Fest head programmer Evrim Ersoy said, "We have a very long history of showing socially awkward, uncomfortable comedies, and The Square fits firmly in that. It's a biting satire of the art world, it is a take-down of the male psyche, it is incredibly uncomfortable, incredibly funny."

This year the opening night spot goes to Three Billboards Outside Ebbing, Missouri, playwright-turned-director Martin McDonagh's follow-up to 2012's Seven Psychopaths. The tale of a very different kind of revenge, headlined by Frances McDormand and Woody Harrelson, is already picking up pre-emptive award season buzz, and receives its U.S. premiere at the fest. Ersoy called McDonagh "a unique voice. … We've been waiting for a very long time to see Three Billboards, and when we saw it we knew it would be perfect to open with. It's a very Fantastic Fest kind of film; it shows the best of humanity in a way that you don't expect."

Out of the four, McDonagh is the only Fantastic Fest first-timer, and as always the lineup features a coterie of returning talents. For Ersoy, that's part of the festival remit as set by founder Tim League, to support filmmakers throughout their career: He said, "It's a family environment." Horror also plays a big role in the genre fest, including two Stephen King adaptations with period novella 1922 (from 2010's collection Full Dark, No Stars), and Oculus/Hush director Mike Flanagan bringing Gerald's Game to the screen (including what Ersoy promises to be the most terrifying scene in any film this year). Terror fans shouldn't sleep on Hagazussa – A Heathen's Curse, the first feature from German director Lukas Feigelfeld. It's actually his graduate thesis project film, and Ersoy painted it as in many ways a companion piece to another FF breakout success, The Witch. The Originals (Al Asleyeen), one of the Greater Middle Eastern films highlighted this year

Like most festivals, there's a strong and diverse international section, with movies already announced from as far afield as Japan, Cambodia, Sweden, Spain, Germany, the Netherlands, and Scotland. However, every year Fantastic Fest puts the spotlight on a country that is too often overlooked. In previous years, Norway, India, and Turkey have been the center of attention, but this time it's a region rather than one particular nation, with two Egyptian films (the box-office busting The Originals and musical oddity Anyab) heralding the first flash of a mass of movies from the rising Arabic film industry. Ersoy said, "From Egypt to Iraq, to Lebanon, to Afghanistan, all of that region that we term the greater Middle East."

He credits the organizers of Beirut's Maskoon Fantastic Film Festival for opening him up to the world of Arabic cinema beyond the highly political work that tends to define the region internationally. "There's a new generation growing, and they're hungry for the language of genre, of horror, of sci-fi. They're hungry to see stuff that doesn't fit in to laws or rioting or corruption."

Here's the full first wave: Expect at least two more waves, including the closing night film, before the festival begins on Sept. 21. Follow all the announcements, news, reviews, and interviews at www.austinchronicle.com/fantasticfest.

1922
D: Zak Hilditch
World Premiere, 101 mins, USA, 2017
1922 is based on Stephen King's 131-page story telling of a man's confession of his wife's murder. The tale is told from from the perspective of Wilfred James, the story's unreliable narrator who admits to killing his wife, Arlette, in Nebraska. But after he buries her body, he finds himself terrorized by rats and, as his life begins to unravel, he becomes convinced his wife is haunting him.

78/52
D: Alexandre O. Philippe
Regional Premiere, 91 min, USA, 2017
This masterful documentary focuses on a single aspect of Hitchcock’s Psycho to demonstrate the master’s technical ability in storytelling. With expert interviews and rollicking analysis, 78/52 sets a new bar in how to examine film overall. Anna and the Apocalypse
D: John McPhail
World Premiere, 107 min, Scotland, 2017
Anna’s life is dominated by the typical concerns of her youthful peers until the Christmas season in her small town brings not Santa, but an outbreak of the undead in this genre-mashing holiday horror musical. Yep. Musical.

Anyab
D: Mohammed Shebl
Repertory, 100 min, Egypt, 1981
Anyab (Fangs) is an oddity worth rediscovering! An Egyptian take on The Rocky Horror Picture Show, this eye-popping musical of madness manages to cram horror, science fiction and even social commentary together while charming with its outrageous costumes and action. Brawl in Cell Block 99
D: S. Craig Zahler
U.S. Premiere, 132 min, USA, 2017
S. Craig Zahler (Bone Tomahawk) returns with his sophomore feature, Brawl in Cell Block 99. An exhilarating exercise in analogue violence, Cell Block follows the brutal exploits of a former boxer who finds himself incarcerated after a drug deal goes wrong. Trapped in a maximum security facility, he must fight to stay alive and to protect those he loves.

Cold Hell
D: Stefan Ruzowitzsky
U.S. Premiere, 91 min, Germany, 2017
A young Turkish woman living in Vienna feels increasingly lonely after she witnesses a murder and finds herself next on the killer’s agenda in this smart and gritty thriller from the director of Anatomy and the Oscar-winning The Counterfeiters.

The Endless
D: Justin Benson & Aaron Moorhead
Texas Premiere, 111 min, USA, 2017
When brothers Justin and Aaron return to the cult that they escaped from ten years ago, they encounter a web of secrets and mysteries that threatens to tear them apart.

Gerald's Game
D: Mike Flanagan
U.S. Premiere, 103 mins, USA, 2017
Flanagan unites with master of the macabre Stephen King for his cinematic interpretation of King's beloved Gerald's Game. Starring Carla Gugino and Bruce Greenwood, Gerald's Game delivers pitch-perfect performances in a chilling adaptation where the horrors of the mind are much worse than what’s in front of you.

Hagazussa - A Heathen's Curse
D: Lukas Feigelfeld
World Premiere, 102 min, Germany, 2017
Set in the 15th century in the Austrian Alps, Lukas Feigelfeld’s Hagazussa takes us back to a dark period in which even the remotest parts of Europe suffered from the paranoia and superstition of the time.

Jailbreak
D: Jimmy Henderson
U.S. Premiere, 92 min, Cambodia, 2017
Cambodia’s traditional martial art of bokator is unleashed in all its bone crunching fury in this action-packed tale of police trapped in the midst of a raging prison riot. Killing of a Sacred Deer

The Killing of a Sacred Deer
D: Yorgos Lanthimos
U.S. Premiere, 120 min, Ireland / United Kingdom, 2017
The life of a brilliant surgeon is thrown into disarray when his friendship with a bizarre teenager threatens the lives of his entire family. Faced with a frightening choice, the man will be forced to assess all that he’s ever done.

King Cohen
D: Steve Mitchell
U.S. Premiere, 104 min, USA, 2017
Featuring interviews from some of the biggest names in genre cinema including Joe Dante, Robert Forster, and Fred Williamson, this documentary tells the story of one of the best and hardest working exploitation filmmakers.

Maus
D: Yayo Herrero
World Premiere, 90 min, Spain, 2017
Yayo Herrero’s directorial debut is a couple's nightmare journey into the heart of darkness. A superlative horror parable, this shocking film is an indictment of modern history, war, and the difficulties of reconciliation. It is a story for our times.

My Friend Dahmer
D: Marc Meyers
Texas Premiere, 107 min, USA, 2017
This is the story of Jeffrey Dahmer, a high school loner whose life would shape up to be something far more frightening than anyone could have imagined.

The Originals (Al Asleyeen)
D: Marwan Hamed
International Premiere, 125 mins, Egypt, 2017
Samir works for a bank, provides for his ever-demanding family and dreams of being in an Egyptian talent show. When he’s unexpectedly fired, Samir finds himself recruited to be part of a secret society and finds a darker side to life in Egypt.

Ron Goossens: Low-Budget Stuntman
D: Steffen Haars & Flip van der Kuil
North American Premiere, 78 min, The Netherlands, 2017
The latest from the comedic team behind the New Kids films and Bros Before Hos. Ron Goossens is totally shitfaced. Only by working as a movie stuntman and bedding the hottest actress in the Netherlands can Ron save his marriage. 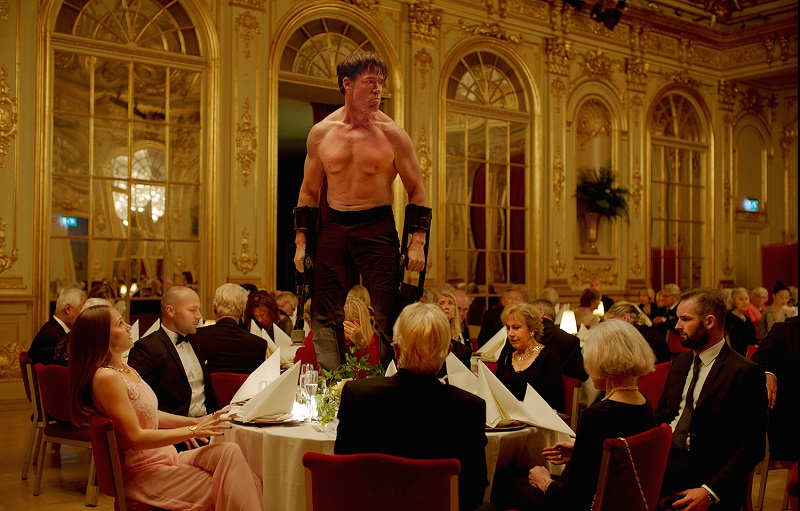 The Square
D: Ruben Östlund
U.S. Premiere, 150 min, Sweden, 2017
An art museum director’s life becomes a comedy of errors when trying to put together his latest exhibit in Force Majeure director Ruben Ostlund’s latest, which won the Palme d’Or at this year’s Cannes.

Super Dark Times
D: Kevin Phillips
Regional Premiere, 102 min, USA, 2017
A split-second act of violence forever changes the lives of two Nineties kids. Now they must cope with both the fallout of that moment and the pressures of high school in this clever and bloody coming-of-age thriller.

Three Billboards Outside Ebbing, Missouri
D: Martin McDonagh
U.S. premiere, 110 min, USA, 2017
A grieving mother takes drastic measures in an attempt to catch her daughter's killer. Challenging the police to solve the case, she posts a series of billboards that threaten the fabric of rural, Missouri. 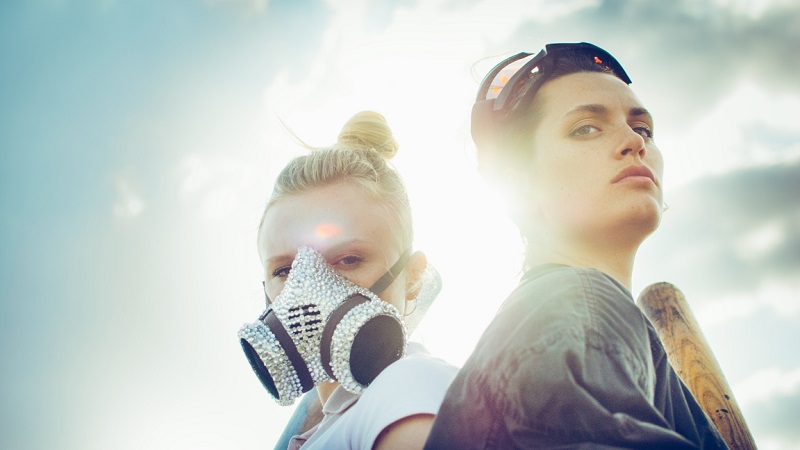 Tiger Girl
D: Jakob Lass
U.S. Premiere, 90 min, Germany, 2017
Failing to crack the ranks as a would-be cop, Maggie begrudgingly settles for a security guard job until she encounters Tiger, a fierce young woman whose rebellious antics leave Maggie questioning which side of the law she truly belongs on.