Mechas, Atlanteans, and vampires: While last weekend's RTX festival was under the banner of local online studio Rooster Teeth, there were big announcements there for local animation outfits Powerhouse and Mighty Coconut as well.

RTX can't go by without a big announcement about RWBY, their anime-inspired breakout success. Aside from a whole new wave of merch, including Toys"R"Us, FYE, and Hot Topic vinyl figure exclusives, and, in a nod to a recurrent sight gag, Pumpkin Pete's Marshmallow Crunch Cereal. Because, as series director Kerry Shawcross put it, "if there's one thing Rooster Teeth knows how to do, it's make a dumb joke and run with it forever."

As for the show itself, during Friday's big RWBY panel, word came about the release of season 5, so set your alarm for Oct. 14, 2017. Shawcross and co-director Miles Luna also confirmed that there will be three preview character shorts, starting with Weiss Schnee, going online before the premiere date. As for foreign-language dubs, there are plans, but subtitling will be coming quicker.

However, that's not the only big news for Rooster Teeth Animation. Department head Gray G. Haddock showed a short teaser for a new series: Gen:Lock, a mecha anime that the team hopes will appeal to both the RWBY audience and loyalists to the studio's groundbreaking machinima Red vs. Blue. No word on the release date yet, but it seems very likely that there will be some kind of update at RTX Austin 2018. 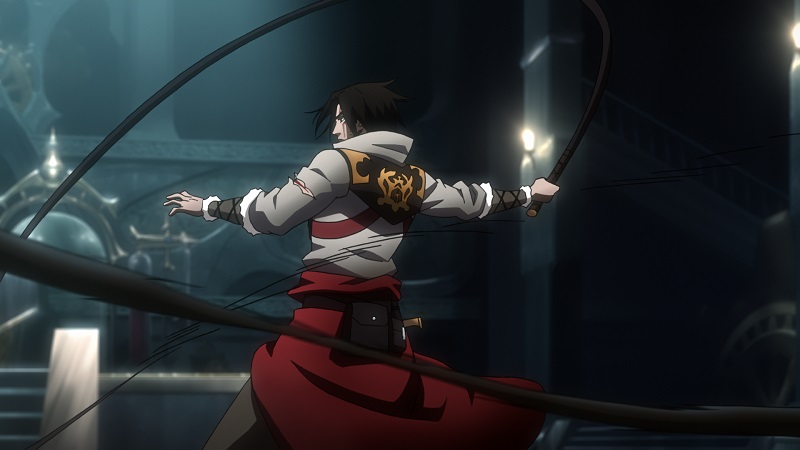 Powerhouse Animation's Castlevania, picked up by Netflix for a second season (Image courtesy of Netflix/Powerhouse Animation)
The weekend also saw a Paramount Theatre screening for the animated adaptation of long-running horror game franchise Castlevania by Austin-based Powerhouse Animation, which debuted on Netflix on July 7. Studio co-founder, CEO/COO, and show executive producer Brad Graeber said his team had been ferociously updating Twitter to follow the audience response on the #castlevania hashtag, and the biggest complaint was that it was only four episodes long.

So good news for fans on Saturday morning when Netflix announced it was picking up the Warren Ellis-scripted show for a second season. Not only that, but the order went from four half-hour episodes for season 1 to eight for season 2. Graeber said, "The fans were upset that it was so short, so we're excited to be providing more." Rooster Teeth and Powerhouse have been the backbone of Austin animation for over a decade, but there are also the new contenders at Mighty Coconut. In part, RTX allowed them to catch up with their peers, and catch shows like Castlevania. Studio co-founder Christina Martell said, "We were at that premiere, and went to dinner, and we were like, 'Aaaand season 2. Congrats, guys!'"

However, the younger studio is already making its mark, and the team members got to show off their new YouTube Red series Kings of Atlantis before the RTX audience. Their first foray into episodic storytelling, the Minecraft-inspired show is part of a busy slate, as the animation house keeps providing effects for local and national advertising campaigns, as well as films, including Rooster Teeth's second feature, Lazer Team 2. Not only that, but their original short "Pigeon: Impossible" is being adapted into a feature by Blue Sky Studios (also responsible for the Ice Age and Rio franchises). Additionally, executive producer Tim Cunningham said, "We have several other episodic projects that are very close, and some more feature stuff that the needle has been moved on."

With the success of Kings, and the allure of telling stories for younger audiences, the Coconuts are applying their might to developing two more series. One is tightly under wraps, but the other involves working with Octavia Spencer on an adaptation of her children's book series, Randi Rhodes, Ninja Detective, which head of original content Carrye Glazar described as "an animated Nancy Drew serialized whodunnit [and] we think there's something really cool there."

It's no coincidence that Powerhouse and Mighty Coconuts are both moving into episodic storytelling at the same time. "For animation, the series space is where you want to be," explained Glazar. "There's so much demand for it right now. Not only is it cable, it's network, it's digital buyers. They all want it now, and the more, the better."

Moreover, there's no sense of rivalry between the three studios (all of whom have either collaborated at some point, or are good friends), but a feeling that their recent combined successes are a selling point for Austin as an animation hub. Glazar said, "With [Kings of Atlantis] under our belt, we can actually say, 'Hey, this is a viable place to make animated content, with Rooster Teeth, Powerhouse, and us.' I think it's awesome that we're all moving forward at the same time."