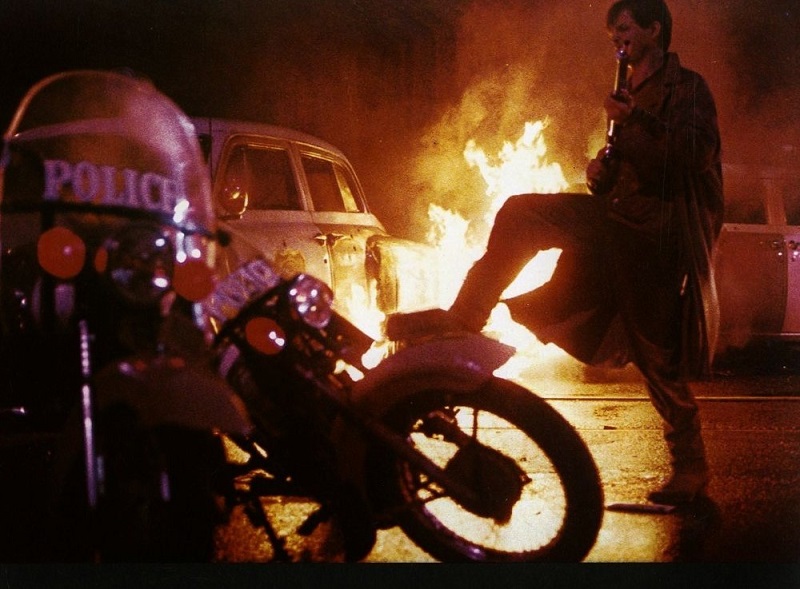 Streets of Fire is the Velvet Underground & Nico of Eighties movies. Almost nobody saw it at the time, but for the few that did, it became their magnetic North.

Back when it flopped on release in 1984, someone asked director Walter Hill why it failed. His answer was simple: Not enough people went to see it. There is no reason why it shouldn’t have been a massive success, with its pure blend of vintage cars, super-stylized gang warfare, and a score that mixed Ry Cooder, megastar producers Jim Steinman and Jimmy Iovine, Stevie Nicks, Maria McKee, and Tom Petty. But audiences stayed home, or went to see The Natural instead.

Since then, it's become an underground, underdog favorite, with only battered VHS copies, a mediocre DVD release, and the odd 35mm retrospective screening to tide over fans of sharpshooter Tom Cody, rock star Ellen Aim, and biker boss Raven. Finally, Shout! Select (the new and carefully curated art imprint of Shout! Factory) has revved up a long-awaited U.S. Blu-ray special edition.

It's a simple story, summed up in Walter Hill's legendary elevator pitch: The leader of the gang kidnaps the queen of the prom, and soldier boy comes home to do something about it. In this case, it's Raven (Willem Dafoe, fresh off his critically acclaimed performance in The Loveless) as leather and PVC-clad psychopath Raven, who launches a beyond ballsy plot to snatch Ellen Aim (Diane Lane, fresh off Broadway and scarcely out of high school) at her first gig in her home borough of the Richmond. Local diner owner Reva (Deborah Van Valkenburgh) sends a letter to her brother and Ellen's old boyfriend Tom (Michael Paré, at that point heading for arthouse hunk status post-Eddie and the Cruisers). He'd gone to war and never bothered coming back, in part because of how things ended with Ellen, but now he's the only guy that would dare invade the Bomber's lair in the Battery. With a stolen car, Ellen's weaselly manager Billy Fish (Rick Moranis) and hard-hitting, hard-drinking mechanic McCoy (Amy Madigan) launch into an adventure that is part Western, part classic-era MTV video, part Peckinpah homage.

Yes, there's a lot packed in here, and that's before even touching on famous, early micro-appearances from Ed Begley Jr. and the late, great, and incredibly missed Bill Paxton. 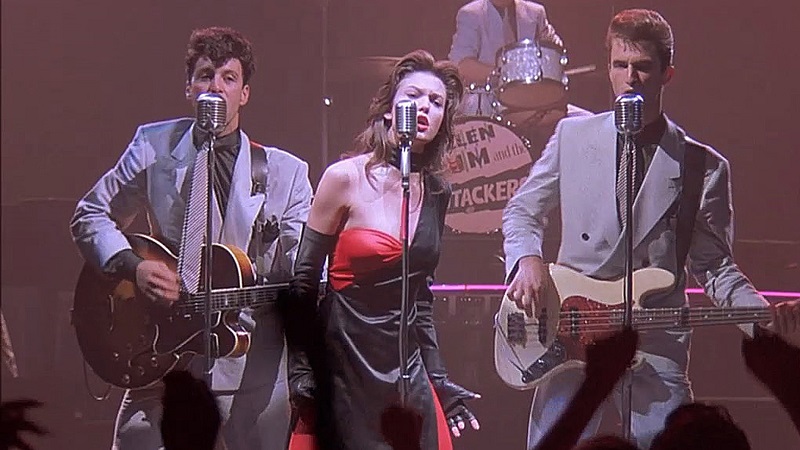 Tonight is what it means to be young: Diane Lane as Ellen Aim in Streets of Fire

From moment one, Hill lays out what Streets is – a rock & roll fable. It works because it makes an unreal world totally realistic. As cinematographer Andy Laszlo puts it in one of the original featurettes included here, they didn't light up the set, they lit down the set. The streets and bars were covered in neons and fire and explosions, and that's all the illumination the world needs. It's a testament to the collaboration between art director James Allen, Laszlo, and production designer John Vallone that they took what Hill had been stumbling towards with the stylized noir of 48 Hours and made it into a cohesive vision.

Hill anchored his earlier movies – Hard Times, The Warriors, The Long Riders, and what was arguably his masterpiece, Southern Comfort – in a grimy reality. Even The Warriors, from whose tale of a partitioned city and elaborate gangs Streets springs, had a certain Seventies boardwalk sleaze to it. But this is a self-contained fairy tale, just with slide guitar and rifles. Streets effortlessly drops in from an alternate timeline, where Buddy Holly never died, cops drive Studebakers, and style is everything. No wonder Hill cites Umbrellas of Cherbourg as such an influence.

This Shout! Select release and restoration doesn't just open up the film to a new, belated audience, but shows them the film looking better than it ever has before (apart from maybe the mythical 70mm prints struck at first release, which are a new Holy Grail for obsessive fans). Moreover, American audiences not only finally get Rumble on the Lot (the feature-length retrospective with Paré, Madigan, and Allen included in the 2012 German release), but also Shotguns & Six Strings, a massive new making-of with pretty much everyone involved (save for Dafoe, Lane, and maybe the caterer). 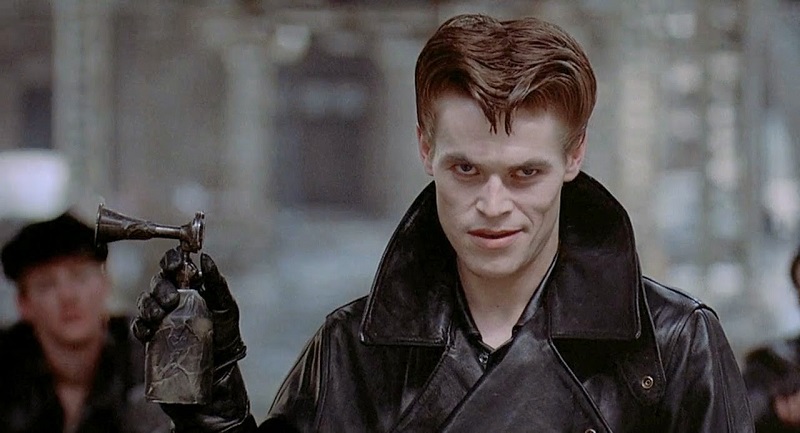 Of course, there is a degree of crossover in the material, including some clips from the vintage featurettes that are also included in full. Yet combined, they bring together the definitive overview. From the surprisingly dark first script concepts to the extraordinary hopes for a new franchise, the film was drenched in insanity. Sane films don't tarp the entirety of the Universal Studios New York street backlot to fake night shoots, or spend two weeks filming the legendary ending fight, when Cody and Raven literally hammer at each other with spike mauls. And what kind of maniac casts real Hell's Angels to play the Bombers motorcycle gang, and tells them they had to cut their hair? Walter Hill, that's who.

Both docs also delve deep into what went wrong. How it was screwed over on release with zero publicity, just to sleight project guardian angel, producer Joel Silver, who was quitting Universal to set up his Silver Pictures shingle. Yet they also both touch on what an obsession it has become for other filmmakers, and its pervasive, stylistic influence in spite of its commercial failure. As Hill puts it, "You're unique for 10 minutes, and then popular culture sweeps it all together."

Streets of Fire (Shout! Select) is out now on Blu-ray. Also out now: 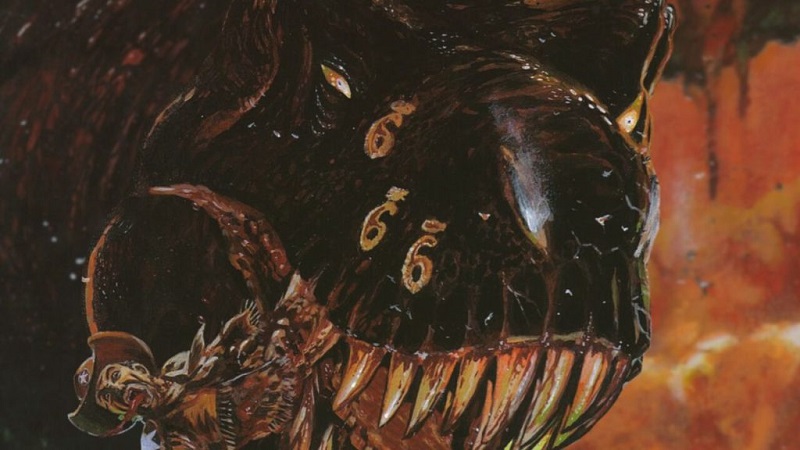 Dinosaurs versus cowboys? Sure! Anything goes in comics documentary Future Shock! The Story of 2000AD (Image courtesy of Severin Films)

Future Shock! The History of 2000 AD (Severin Films, on Blu-ray and VOD now) faces the uphill challenge of making an American audience interested in the ups and downs of a British comic, while still making something that will hold the attention of fans of a title that has defined UK sci-fi and fantasy for decades. Honestly, first-time director Paul Goodwin does an extraordinary job of taking what is an insular concern, explained through a series of talking head interviews with a panoply of middle-aged white male creatives (it was, after all, born when there were British boys' comics, and British girls' comics, and never the twain), and turning it into an exploration of one of the most punk-rock publications of the modern era.

What Goodwin does is concentrate on the comic's significance as a launch pad for so many giants of the medium (read our interview with producer Sean Hogan here for more on that), and keeps the analysis of individual strips to a minimum.

At least, that's what he does in the main feature (read our Fantastic Fest 2014 review here). Obsessives, and those intrigued but baffled by the decades of strips within the long-running anthology title, will relish the roughly six hours of extras on the expansive Blu-ray release. Five long-running stories are pulled out, including racial segregation metaphor Strontium Dog and bloody, Celtic fantasy Sláine, with a deeper dive into their significance in the comic and beyond. After all, 2000 AD was often nakedly political and confrontational, and there's weight in having writer Pete Milligan explain the impact of having a black character on the cover of a widely distributed comic in the Eighties.

Strong as the film is, those extras are really the gems, including lengthy extended interviews with 2000 AD alumni and luminaries such as American Gods creator Neil Gaiman. There are also lengthier versions of the sequences about the comic's defining icon/hero/anti-hero/villain Judge Dredd, and its complicated, nay often self-destructive, relationship with the American market. Now if only they had included the day-long interview with legendarily irascible founder Pat Mills. Now that would be unmissable.