It’s the not-so-secret dream of every fan that the actors they love so dearly onscreen actually like each other in real life. And when you’re a Battlestar Galactica fan, hearing that Edward James Olmos is “Grandpa Eddie to the Bambers,” your head and heart pretty much explode in tandem. 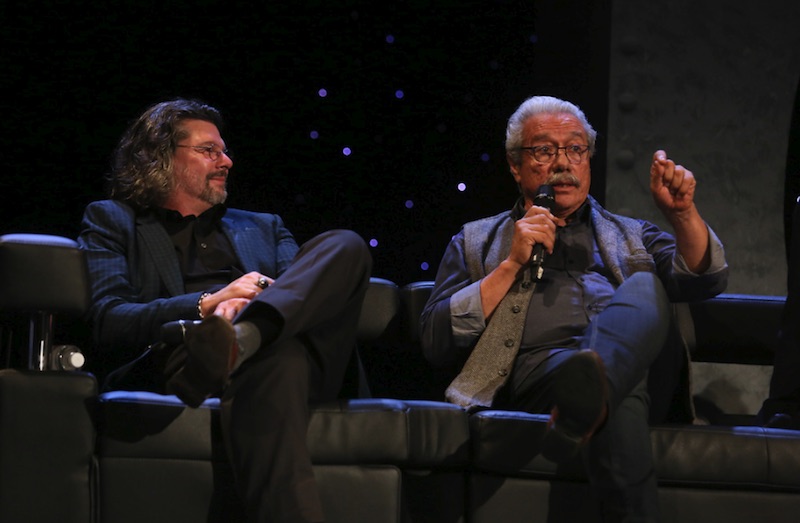 That was just one of the takeaways from Saturday night’s ATX Television Festival Paramount Theatre reunion of cast and crew from Battlestar Galactica, the Aughties Syfy Channel show that proved a reboot of a pre-existing IP could be fodder for groundbreaking artistic reinvention.

Show creator Ron Moore (now moved on to Outlander) admitted he wasn't, at first, sold on the concept. A fan of sci-fi, he said of the original 70s era show, “It didn’t light the fire in me the way Trek and Star Wars did.” A veteran of Deep Space Nine, he said, “I’d done 10 years of Trek and wasn’t sure I wanted to go back to space again.” But in the wake of 9/11, the reboot’s premise of “an apocalyptic attack” that would give him the opportunity to talk about terrorism, fundamentalism, and the role of the military was tantalizing, especially given the network’s mostly free rein. “‘You can do whatever you want’ was mostly the attitude,” he said, stipulating that the network’s notes were about “stupid things” – including concerns over how depressing the show would turn out to be.

Star Edward James Olmos was also reluctant to sign on to the series, worried that the sci-fi premise would mean Creature From the Black Lagoon-like special effects. The script changed his mind: “What got me into it was the writing.” And that included Moore’s three-page manifesto – the show’s “bible” –  including the opening salvo that “Our show is built on the idea that a science fiction series can employ ground-breaking special effects, dynamic cinematography, realistic situations, believable characters and explore contemporary social and political issues without sacrificing dramatic tension or excitement.” As his castmates recollected, Olmos delivered his own version of that call to arms early in the shoot, imploring them to take the show seriously, in a mirror of his character Commander Adama's galvanizing “So say we all” speech – a phrase that ATX Fest cleverly gave a Texas twist to on shirts with “So say we y’all.” 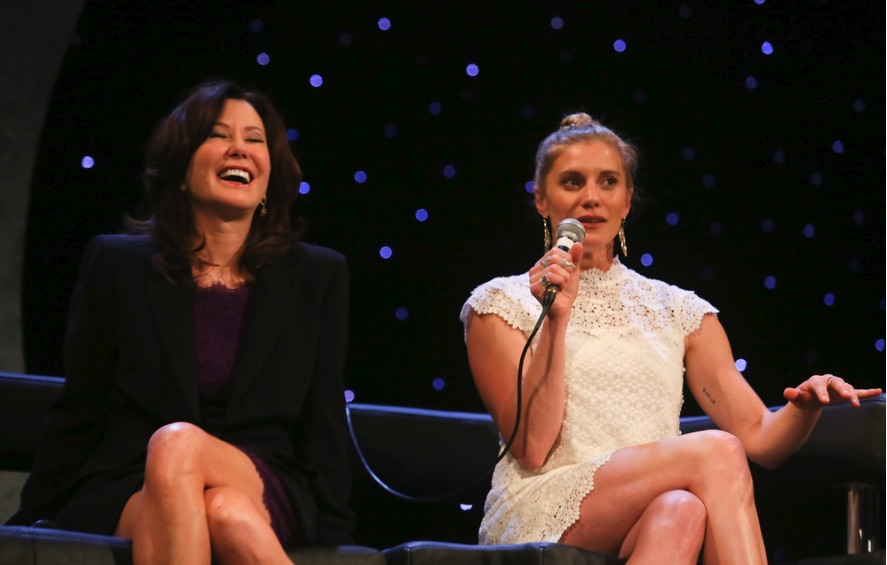 Co-star Mary McDonnell, courted for the role of President Roslin, also initially resisted the project. When the first iteration of Battlestar Galactica was on air, she was a New York theatre actress without a television set, so she had no context for the new show. Offered the part in the reboot, she said, “I just giggled.” But the show’s contemporary resonance – especially considering Hillary Clinton’s then-run for a seat in the Senate, and more broadly, how Roslin emblematized for her generation “a woman coming into power without training or support” – struck a chord with McDonnell.

Katee Sackhoff had the opposite experience; she wanted the role of Starbuck desperately and auditioned repeatedly, despite being told she was too feminine to play the tough fighter pilot. “I cut off my hair. I took off my stilettos, ‘cause I guess Starbuck doesn’t wear those.”

She got a laugh when she recounted how she first told her father who she’d be playing in the reboot of a show she’d never seen before – not realizing that Starbuck in the original was played by a man. “He said, ‘Do me a favor. Rent it and call me back.’” Eventually Sackhoff went to an Internet cafe (remember this, was the early aughties) to scan the message boards and see what Battlestar O.G. fans thought about Starbuck’s sex change: “I learned in that moment, fuck ‘em.”

Grace Park revealed she’d been in the running for Starbuck, too. “When I was told I got Boomer, I was pissed,” she recalled – at the time, she didn’t realize how instrumental to the series her character would be. “I was like, who the eff is Boomer?”

Of the producers’ decision to not tell anyone on set that Sackhoff would return to the series, despite Starbuck’s death? “This was one of the stupidest things David [Eick, executive producer] and I did the entire show,” Moore laughed. Sackhoff’s castmates were heartbroken at her departure, and she felt sick about lying to them. She recalled telling the producers, “‘Guys, I can’t do this anymore. I’m telling Eddie. ‘Cause if I tell Eddie, he’s telling everyone.’” 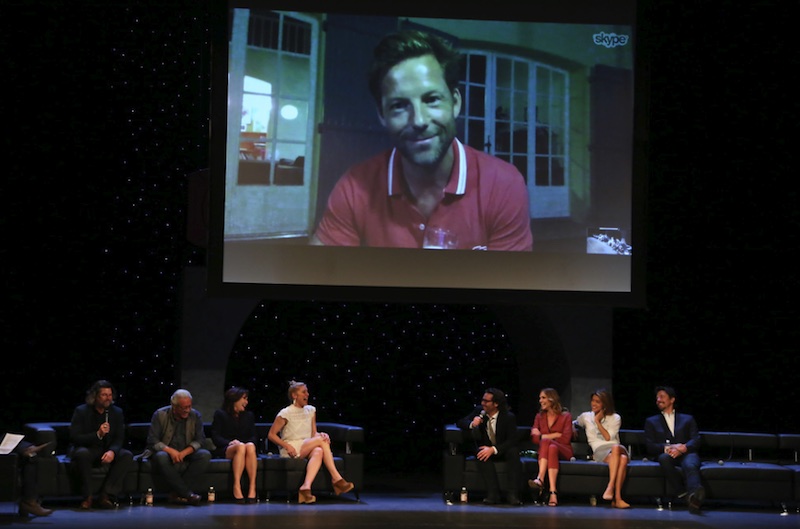 Jamie Bamber (Apollo) Skyped in from France, bleary-eyed from hosting a kids’ slumber party. “That was a long time ago, I don’t remember anything,” he said when asked to reminisce. “I just woke up.” He was awake enough to have poured himself a pint, which he tipped to the audience with a toothy grin. He signed off from the call by blowing kisses to each of his cast mates.

Olmos didn’t blow kisses to end the night, but he did one better: At the Admiral’s command, the crowd rose to its feet and joined in a chorus of – what else? – “So say we all.”

Check out more of our ATX Television Festival coverage, including a photo gallery from the Battlestar Galactica red carpet.