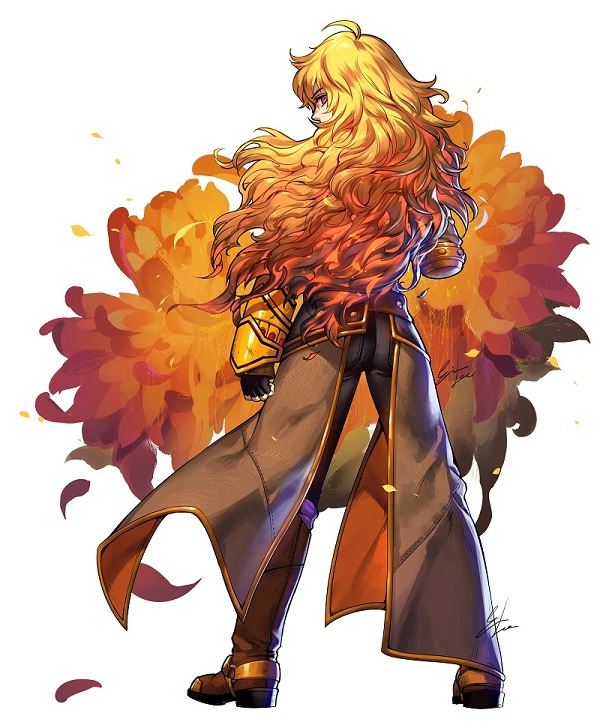 "We're discovering a lot more that we really do have a strong female audience. Maybe they're a little less quiet than they were before, but they're definitely out there." Barbara Dunkelman on the importance of characters like RWBY's Yang, for whom she provides the voice. (Image courtesy of Rooster Teeth)

There's a stack of half-empty pizza boxes at Rooster Teeth. It's not leftovers from a production meeting, but the happy vestiges of a Make-a-Wish visit to the Austin-based online studio. It's all part of Barbara Dunkelman's job as the company's community manager, but it's not her only job around here.

It seems a far remove from the animated character that has made her famous: the gun-gauntlet-wielding Yang, one of the core characters in Austin-based Rooster Teeth's breakout success anime RWBY (season 4 of the show hit Blu-ray this week). Yet there's more in common between the two roles than it seems.

The transition from community manager to star (while keeping up her day job, and adding marketing manager and co-manager of Rooster Teeth's annual convention RTX to her resume) might seem unlikely. However, according to Dunkelman, it's all part of the studio's DIY, everyone-does-everything tradition. She said, "A lot of people ask, 'How do you get into voice acting?' and I don't really have a great story for them."

It all began when RWBY creator Monty Oum showed her a design for a character "with blond hair and big boobs, and he told me, 'how do you feel about playing a Goldilocks-type character in an anime?' I was like, 'That sounds awesome.'" After what she called "an unofficial audition type-of-thing, they just went, 'Yup, this is you.'"

In many ways, the character was a natural fit for her, and it wasn't just the physical similarities. She said, "The guys writing the show, Miles [Luna] and Kerry [Shawcross] and Monty, they knew me very well, and they wanted to transfer a lot of my character traits and personality traits onto Yang." As community manager, she said, "I'd been caring for these millions of kids, I guess, for a couple of years, and they took that aspect into Yang and made her a motherly, caring character, but who also likes to have fun and is very outgoing. So it's the perfect combination of different sides of me." 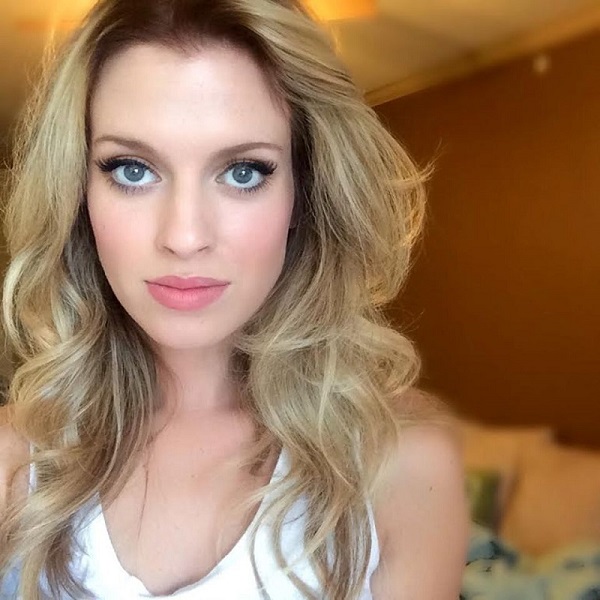 "[The writers] knew me very well, and they wanted to transfer a lot of my character traits and personality traits onto Yang." Barbara Dunkelman on the origins of her breakout character in Rooster Teeth's groundbreaking American anime RWBY (Image courtesy of Rooster Teeth)

Being so closely identified with the character can be a confusing experience, as people constantly refer to Dunkelman as Yang by accident, or expect the character to change her hair color whenever the actress does. She described her own experience first seeing Yang as a completed animated character in action as "surreal [and] strange. My voice is going to be coming out of that? That's me, and she's way cooler and more stylish than I ever will be, and I can never fight like that, and I never will be able to."

Even before the show, Dunkelman was a star within the extensive RT community because of her engagement with fans online. The first clue that this new role was going to be something different was RTX 2013: Even before the show had debuted, cosplayers had made costumes just from the trailers and concept art. She said, "That's when we all knew something special was going on. But for me personally, I'm used to signing autographs as Barbara. Whenever I would sign with somebody like [RT founders] Burnie [Burns] or Joel [Heyman] or Gus [Sorola], it would always be, 'Oh, I have this Red vs. Blue poster for them to sign.' Sometimes they would have me sign that or sign something else, and at RTX that year they started bringing RWBY posters that they only wanted me to sign, and not Joel and not Burnie. 'Wait, what, you want me, and not this guy?' That was very surreal, very eye-opening."

Four years on, and she's in the even more surreal position of having action figures and merchandise based on the character based on her. She noted, with a slightly embarrassed pride, that her parents collect one of everything, while she also collects all the fan art that she is sent. "There's this piece a girl called Natty did for me. It's a picture of me as Yang, so it still has all the Yang clothes and hair, but it's my length, and she's got blue eyes. It's just this beautiful portrait."

The addition of RWBY, with four female protagonists, changed the perception of Rooster Teeth as a guy-gamer environment – although Dunkelman stressed that, with the success of strong female characters like Tex in Red vs. Blue, that was a perception, not the reality. However, she added, "I think that we're discovering a lot more that we really do have a strong female audience. Maybe they're a little less quiet than they were before, but they're definitely out there."

“To have to place myself in that mindset was challenging, but I think the most fun I’ve had doing [Yang’s] voice, I guess just because I got to get out of my comfort zone.”

The loyal fanbase has seen some major changes in the characters over the first three seasons, with Yang undergoing one of the most dramatic and shocking at the end of season three when she lost her arm. That's something that was planned well ahead: Dunkelman said, "I was warned about that, just so I wouldn't be taken by surprise when I read the script." However, she tries to stay as spoiler-free as possible, watching the completed episodes as they go online, at the same time as the fans.

During recording for season 4, that was easier than ever, as the four leads went their separate ways: Ruby (Lindsay Jones) is off hunting Grimm, the uncanny monsters that stalk the land; Weiss (Kara Eberle) has returned to her aristocratic family, while Blake (Arryn Zech) undergoes a surprising reunion. Meanwhile, Yang is left brooding after her defeat and loss, and is forced to absorb some hard truths about herself before she can help bring the team back together.

In a season where all the characters show a different side, it's a particularly vital crossroads for Yang, and for Dunkelman as her voice. She said, "Going into this season, having to do her completely differently than I've ever done her before, and have this mentality of loss and hopelessness. … To have to place myself in that mindset was challenging, but I think the most fun I've had doing her voice, I guess just because I got to get out of my comfort zone."

Yet it's exactly that struggle, filled with the idea that there will always be a light at the end of the tunnel, that has helped bond fans to the show. Dunkelman said, "There's been a lot of fans saying that RWBY saved their lives, or Rooster Teeth saved their lives, because they were able to find something that made them smile when they couldn't smile, or it brought them into a community when they had no friends. Things like that affect me all the time. Even if we can do that for one person, that makes it all worth it, and the fact that we can do it on a global scale is the biggest honor that any of us can have."