Austin has been a hotspot in the burgeoning virtual reality industry ever since early prototype headsets made their way into local software developers’ hands. Despite this, access to VR has been limited. One company is hoping to break outside the niche and expose a wider swath of Austinites to this gotta-see-it-to-believe-it technology. 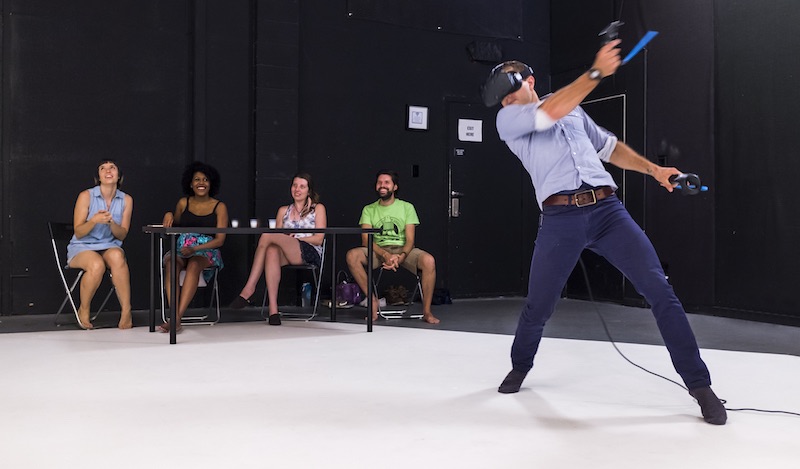 You too can look like a dummy in front of your friends! Best part is, you won't care.

Beginning on June 1, Originator Studios in East Austin will allow the general public to rent its studio space for use as a virtual reality arcade where groups can try out VR games and applications as well as spectate on their friends’ experiences in a BYOB, party-friendly environment.

“Imagine renting out a karaoke room for the hour. This is sort of that, but in the future,” said Originator Studios co-owner Willie Rockefeller.

The studio is equipped with powerful computer systems attached to two HTC Vives, one of the higher-end headsets on the market, allowing two players to compete in multiplayer games or to have separate experiences. Projectors display live video feeds from the players’ points of view on the walls of the studio, giving spectators a glimpse at what their friends are reacting to. The projectors and all of the necessary sensors to detect player position and movement are suspended from the ceiling, freeing up the floor for players to walk (or flail) around.

Originator Studios normally rents out their 800-square-foot space for the likes of photo shoots, video shoots, and art installations. Rockefeller and fellow co-owner Derek Gildersleeve first outfitted the space with virtual reality equipment to test out the software and 360-degree videos they were commissioned to create as a part of Originator’s sister company, Hybrid VR. They soon found themselves using their elaborate testing environment to entertain guests with the latest VR games and apps. 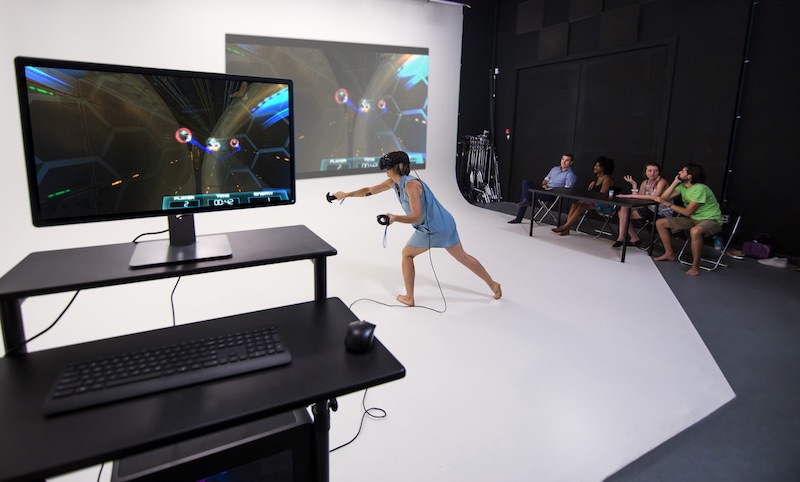 “Every time we would bring friends over, they’d say ‘This feels like a waste that you’re not doing something with this completely integrated VR setup,’” Gildersleeve said.

The computers at the studio come equipped with a wide range of games available for players to try, from simple, arcade action games like Fruit Ninja VR and Knockout Kings to more esoteric offerings such as virtual music studio SoundStage and acrophobia-triggering Richie’s Plank Experience, with more titles frequently being added to the catalog.

The cost for a session at the arcade varies depending on the size of the group and number of headsets used, ranging from $60 for up to six people sharing one Vive for one hour to $380 for groups of up to 12 sharing two Vives for four hours. All sessions at the studio are attended by a studio representative who guides the group through their experience, helps with set-up, makes sure sessions go smoothly and safely, and offers suggestions for experiences groups might be interested in.

Until now, high-end virtual reality has been a mostly solitary affair with a high barrier of entry. The headsets, sensors, and controllers cost hundreds of dollars on their own and require a powerful PC to run smoothly. Room-scale virtual reality experiences – in which the player's body movements are mirrored in virtual space – require a large space not available in many homes. By offloading these hefty requirements from the user, Originator Studios could potentially expose VR to an audience who would never have a chance to try it otherwise.

“A lot of people haven’t put on the headset and had the full experience,” Gildersleeve said. “Every time someone does that, they become like a child for twenty minutes. We’re excited about the possibility of getting a bunch of people who haven’t done it into a space that’s perfectly fit for it.”