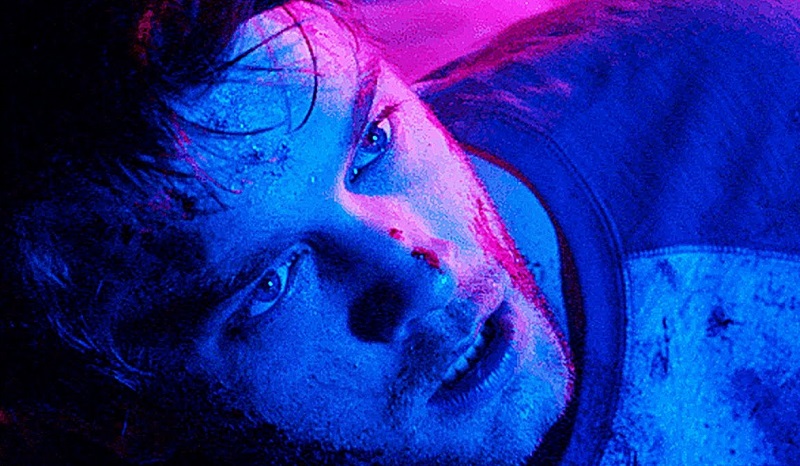 It seems peculiar, nay a massive oversight, that nobody has invented a specific term to describe the ever-growing library of modern horror films that deliberately evoke the mood, conventions, and tropes of Eighties independent low-budget horror. Case in point: VHS-inspired Beyond the Gates.

John (Chase Williamson, best known as soy sauce-sipping slacker David in John Dies at the End) and Gordon (Graham Skipper, a veteran of Eighties resurrection shockers like Almost Human) are forcibly reunited when their father disappears and they're tasked to clear out his ailing small-town video store. One awkward evening, they and Gordon's girlfriend Margot (Brea Grant, Friday Night Lights' Jean Binnel) start playing a video board game they find in a locked room called Beyond the Gates and …

OK, for anyone under the age of old-enough-to-remember-VHS, back when people watched movies on a magical device called a video tape, some bright spark decided to create board games that came with a tape that played in the background, with a game host giving useful (well, mostly useful. Somewhat useful. Well, quite annoying, actually) narration and hints. Imagine Monopoly with inessential cut scenes, and you're there. Anyway, while this sounds like a terrible idea, it was a big enough deal that there were official Star Wars, Star Trek, and Wayne's World tie-ins.

Yes, Wayne's World was a big deal then, too, but we really don't have time to go into all that.

However, the most famous and beloved was Atmosfear, a goofy horror with an absurd host called the Gatekeeper. Beyond the Gates has horror institution Barbara Crampton (From Beyond, You're Next, We Are Still Here), who goes beyond simply reciting pre-recorded lines, and instead tells the boys that beating the game is the only way to save their father's soul.

Beyond the Gates is fun enough for a pizza-and-beer kind of evening, but it’s no Fireball Island.

The obvious reference point is an evil Jumanji, or the lesser-known The Black Waters of Echo's Pond. However, the influences worn on its bloody sleeves are the obvious cavalcade of Eighties low-budget and straight-to-video schlock. No surprise, since director Jackson Stewart is a former assistant to horror giant Stuart Gordon (who moderates the Q&A from its L.A. Film Festival 2016 premiere included here).

It's far from flawless. Williamson and Skipper both start off so low key that they rarely spark or bond in the half hour before they even crack open the board. That's a long wait in an 80-minute movie, but as soon as the dice start rolling, and the blood starts flowing, the giddy, ghoulish charm kicks in.

Once the dice and heads start rolling, Jackson balances the absurdity with odd splashes of gore, and the zero-budget magic of a few colored lights to depict the other side (hey, if it worked for Insidious, it'll work here). Sideways and overt references to Fulci and of course Gordon, as well as a deliciously over-the-top performance by Jesse Merlin (an occasional screen actor, but far better known as a stage baritone, including his long run as Dr. Hill in Re-Animator: The Musical), give a bloody sheen to the sometime ramshackle proceedings.

This being an overt love letter to the glory days of the neighborhood video rental, VHS obsessives will inevitably freeze frame to catch the selection of fake and real titles, with home recordings of Tic-Tac-Dough and Ally McBeal rubbing sleeves with Blood Messiah and A Room With a View), or check out lost gold (Were-Dad, anyone?). There are a few logical gaps that will drive clam shell obsessives bonkers, like how the box for Beyond the Gates looks in pristine condition, while the tape label is already peeling off.

That might sound like a minor gripe, but it's that kind of slight shortcoming that undercuts what is otherwise a fun romp, knowingly in the mold of such recent high-concept throwbacks as The Void and even Skipper's work on The Mind's Eye. It's fun enough for a pizza-and-beer kind of evening, but it's no Fireball Island.

Beyond the Gates (Scream! Factory/IFC Midnight) is available on Blu-ray and Netflix now.