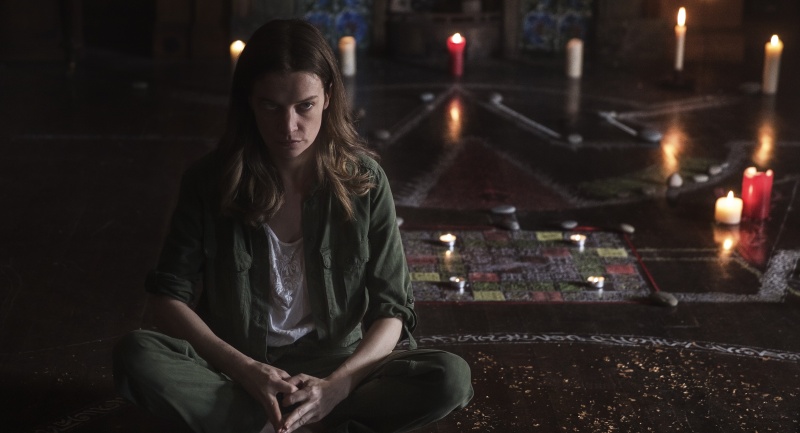 Grief makes demons of us all in A Dark Song, the new supernatural horror out on VOD now. (Image courtesy of IFC Midnight)

Stare into the abyss, and the abyss stares straight back at you. That's the poetic magic at the heart of new supernatural thriller A Dark Song. When his characters pull back the veil on the uncanny, writer/director Liam Gavin said, "It has consequences. This is not a story where it all turns out well in the end."

Gavin's feature debut, an Irish-Welsh co-production, received its world premiere at Fantastic Fest 2016 (read our review here). The night before this interview, he'd been up doing a Skype Q&A from the UK to New York, where his film had been in a double bill with Ben Wheatley's Kill List. "There's a karmic finishing," said Gavin. He had written his script before Wheatley's sinister horror was released. However, Kill List was already out by the time he started pitching his story to the Irish Film Board and the Welsh Film Agency, and gave him context for explaining his sorcerous intent. "That's the same kind of territory. It was our permission slip."

That wasn't the only point of connection, as Gavin cast Wheatley's Sightseers star Steve Oram as Joseph Solomon, the magician whose ritual is at the heart of A Dark Song. He has been hired by Sophia (Catherine Walker, Versailles, Dark Touch) to perform a ritual from the Book of Abramelin, a mystical text that will allow her to ask a favor of her guardian angel. Both are driven characters – she by the loss of her son, he by having stared too long into the abyss – and they are dabbling in the darkest of magic, untethered from the real world, with no guarantees that any of this will work. However, don't go in expecting lightning bolts and CGI-heavy trickery. Instead, Gavin said he took "a Ken Loach approach. It's magic done for real."

Yet this is first and foremost a tale of two dysfunctional people: one both terrified by and obsessed with what he has learned, and one embracing hell in her quest for revenge. Gavin added, "What I am hoping to do is create a situation that's so weird, and so intense that you care for them just because of the whole pressure-cooker thing, that they're in a lot of danger, they're isolated, they're both heading toward damnation." 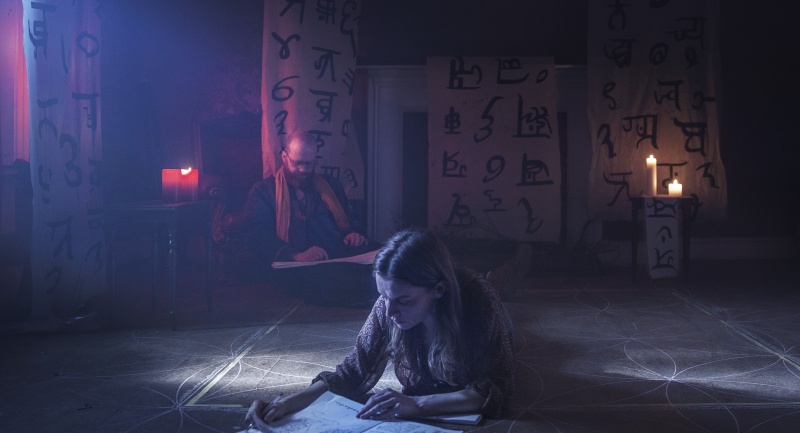 Austin Chronicle: The whole idea of magic as ritual and repetition is the polar opposite of what it is in something like Doctor Strange, and it absolutely informs the way the characters interact and the way you tell the story.

Liam Gavin: What I wanted to do was, if this was done in real life, what would it be like? If there was a subculture out there – and there is a subculture out there which is odd and exciting and exhilarating and dangerous – what would it be like to be involved, to be initiated into that world? This thing exists. The Abramelin is an actual thing, and it's mad in its own way, to make you manifest your guardian angel. It just implies this world that's more things in heaven and earth than are in your dreams, Horatio.

This is how hard magic is. This is what it's like. I did a lot of research into it, and if you actually look, I don't actually show anything. Because, call me old-fashioned, I'm not actually going to a black magic ritual in real life or onscreen. So you're coming out of stuff or going into stuff. You appear to be doing a lot more than you actually are, but all the stuff about the gold leaf coming down, that's an actual thing. The sheer fact that you have to do the ritual a number of times is another. It's not guaranteed. It's a thing you strive to achieve, rather than "cross this and this, and this will happen," as in the Harry Potter school of magic.

AC: Which this definitely isn't. It's hard to imagine Steve Oram keeping a job at a magic school for long.

LG: They should have him, just wandering around going, "Fuck off, I'm not talking to you."

AC: When you look at traditional depictions of magicians, it's either capes and top hats, or Peter Cushing in a nice suit. Joseph is the polar opposite, the fat, grumpy guy. Was the part always for a Steve Oram-kind of actor?

LG: I came under pressure from some of the funding bodies that, "we want someone sexy, someone who's a warrior from the wasteland, who strides in and knows about the occult." The one thing I wanted is that it's rooted, this is something that's happening somewhere in the Midlands. I wanted someone you could imagine in the pub, a bloke you could imagine on the bus, who you could talk to about The X Factor. A believable character.

I saw Steve in The Canal, and then he kept turning up on this program, that program on the television, and it just grew that he was my ideal. That was exactly what I wanted for my character. A trainspotter magician, who is incredibly intelligent, and who has discovered this world and emptied himself into it.

AC: So how did you do research, because Wiccans and satanists can often reach a point where they'll get so far, and they don't like talking about stuff. Not necessarily because they're opposed on principle to talking, but because they worry, "Am I going to be left looking like a chump?"

LG: Firstly, I did know people who were into such things, who were properly into such things, interviewed on documentaries. Secondly, when I was about 13, 14, I had, like lots of kids that age, an interest. I went into the occult, to come out the other side of it. So I knew what it wasn't, and what it was. I had that phase in my life, and was interested in Crowley and things like that.

With all these things gathered up, when I actually started to research this online, there was very little about the actual ceremony. As the script progressed, as is the way with the internet, there was more and more stuff for me to grab hold of.

“[Magic] is not guaranteed. It’s a thing you strive to achieve, rather than cross this and this, and this will happen, as in the Harry Potter school of magic.”

The one thing that people don't grasp is that it is about inducing things. It's about you being a vessel and changing things. It's not, "do this and do that." I was aware of that, so it was just combining all these things in together. I knew the structure of the thing, I knew how you go about doing these things. For myself, I don't deal with the occult, I'm not interested in the occult in my personal life, beyond that's what I did when I was 12, 13. But I did windsurfing when I was that age, and breakdancing. You've got a vague interest, because it's there. So it's about filling in the pieces, and having an emotional truth to it.

AC: The way you handle the ceremony, with Joseph repeating that this may not work even if you do everything right, is reflected in the way you tell the story. That you reach a point at which there's no way this can be a coincidence or accidental, but you've crossed that line a while ago, and they're not in control.

LG: The whole cranking up the tension throughout is a challenge, and it's closely related to these things. You're in the phase of asking, is he a charlatan, and then all of a sudden we do cross that line of, well, this is working. What I describe it as is, there's someone behind the door, and we can't see them, but we know there's someone there.

The way the script was written, there were a huge amount of really short little scenes as we were progressing through time. An audience, every scene they see, they tend to think it's longer than it actually is. In their mind, it's handlebarred, so you can actually traverse through things without anyone thinking that it is quite a considerable period of term.

It's mostly motivated by their relationship. Once we feel she knows what he is, and they've settled into something, and he does start talking about, as he says, the levers and the architecture, and that he cares about this stuff, that's a big moment into buying into it. The really big moment is when she wants to leave, and he doesn't want to let her. He says, "No, no, don't cross the line." He's so scared of something crossing the line. Why would he be that nervous if it was nothing?