The Harry Ransom Center at the University of Texas has added to its celebrated holdings with the recently announced acquisition of the archives of screen and stage legend Peter O’Toole. The actor, who died in 2013, became an international star with his breakthrough screen role as T.E. Lawrence in Lawrence of Arabia. The Susan Lucci of the Academy Awards, Peter O’Toole was nominated for an Academy Award eight times over the course of his career, although he was denied the trophy every time. The Academy of Motion Picture Arts and Sciences remedied that by awarding O’Toole an honorary Oscar in 2002 for his lifetime of work. His nominated performances include Lawrence of Arabia (1962), Becket (1964), The Lion in Winter (1968), Goodbye, Mr. Chips (1969), The Ruling Class (1972), The Stunt Man (1980), My Favorite Year (1982), and Venus (2006). O’Toole’s acclaimed stage performances spanned the entire second half of the 20th century.

“It is with a respect for the past and an eye to the future that I recognize the importance of making my father’s archive accessible and preserving it for future generations,” said his daughter Kate O’Toole. “Thanks to the nature of film, my father’s work has already been immortalized. The Ransom Center now provides a world-class home for the private thoughts, conversations, notes and stories that illuminate such a long and distinguished career.”

Included among the archive are theatre and film scripts, O’Toole’s writings and correspondence with figures ranging from Marlon Brando and Katherine Hepburn to Spike Milligan and Harold Pinter, along with memorabilia, theatre and film programs, audio recordings, props, and costume pieces. Other items sure to intrigue scholars are his unfinished working drafts for the third book in his multivolume autobiography, Loitering With Intent, which covers his film and stage work. 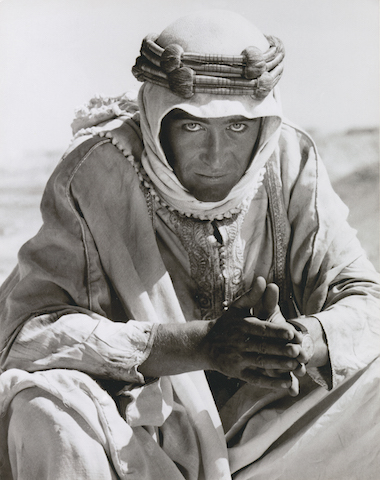 Peter O'Toole in Lawrence of Arabia

“Peter O’Toole was one of the most talented actors of stage and screen on either side of the Atlantic,” said Eric Colleary, Cline Curator of Theatre and Performing Arts at the Ransom Center. “People might be surprised to see his incredible talent with words in performance extended to dozens of published and unpublished writing projects represented in the archives. He was a brilliant writer, and his two published memoirs aside, this is an aspect of Peter O’Toole the world hasn’t yet seen.”

The Ransom Center’s archival collections also include the works of Stella Adler, Robert De Niro, George Bernard Shaw, Eli Wallach, and scores of other stars of stage and screen, as well as a collection of T.E. Lawrence materials, which should make the Austin facility the first stop for researchers of Lawrence of Arabia’s namesake. The archive will be accessible to the public once it is processed and cataloged. Holiday Viewing: The Lion in Winter
It’s 1183 … but squabbling with the family is timeless