So What Is Trainspotting Anyway? 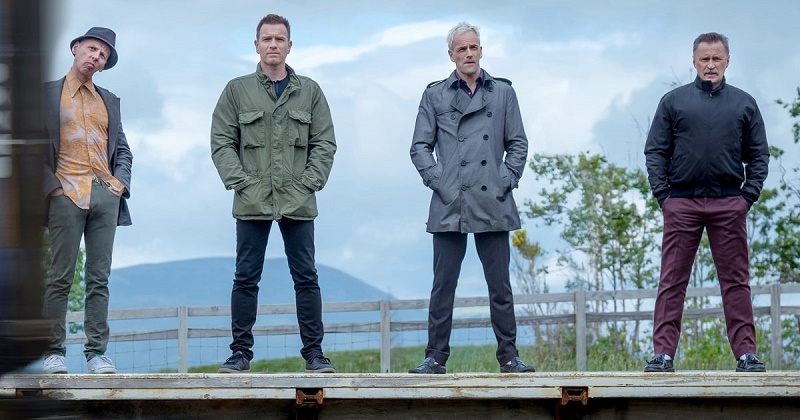 There's an omission in cult classic Trainspotting: Never once is the title explained. Director Danny Boyle gets to fill in that blank 20 years later with T2 Trainspotting. "It was a reason for us wanting to do the film, the sequel, was because of that scene, to go back."

Make no mistake. Trainspotting wasn't just a movie. Irvine Welsh's original 1993 novel was a radical jolt to the Nineties literary scene, on a par with Fight Club or American Psycho. Boyle's movie, which came three years later, took Welsh's bleak, free-form narrative and turned it into a sardonic, snarling, stylish, cinematic firework that caught the mid-Nineties British zeitgeist, a cheery nihilism, with a soundtrack that created a musical through line of club classics from Iggy Pop to Underworld.

How the hell do you duplicate that?

The quick answer is that you don't even try. Boyle, speaking after T2 played at SXSW, said, "You don't set out to capture the zeitgeist. Because if you do, you'll fail, I guarantee." He even questions whether there's such a thing as a zeitgeist to catch, or whether "it's a media concoction. Is there a guy in Whitehaven in Cumbria, does he feel the zeitgeist? I don't know. He may not have even seen the movie."

"This wasn't a progressive sequel," he added. "You could do a three and a four, like The Fast and the Furious, and just go on like that. This is more respectful about where we come from."

As for Edinburgh, Scotland's capital city has changed: still an ancient seat, but younger, more vibrant, a truly international destination. The Brexit election happened midway through the T2 shoot and, as Boyle noted, Scotland voted 62% to stay in Europe. In the first film, Edinburgh was a backdrop. There are geographically impossible leaps in the action, and some scenes were even shot in its great sibling rival, Glasgow. This time it had to be a character in its own right. Boyle said, "When you do a film about homecoming, then place is important, so you see much more of Edinburgh than you ever did in the first film."

The sequel also means Boyle got to tackle that missing scene, which doesn't just explain the origin of the title, but is also a key character moment for one of the ill-fated quartet. Boyle said, "It's hard to imagine now, but promoting the first film, no one knew what trainspotting was. We laboriously tried to explain what the word meant, but when it's one of those words, you either understand it or you don't."

“You don’t set out to capture the zeitgeist. Because if you do, you’ll fail, I guarantee. … It’s a media concoction. Is there a guy in Whitehaven in Cumbria, does he feel the zeitgeist?”

It's a long delayed return. 1996 was all drugs, all party, all come-down, all crash and burn and run before the ashes hit the ground. Now Boyle and Hodge's central question is: Does this brave new world have a place for the four, or will they finally be forced to grow up a bit? "When you get to a later age, you find out that time doesn't care about you," said Boyle.

Moreover, Hodge's script didn't just rehash the characters, but made them, if not 20 years wiser, at least 20 years further down the road. Boyle said, "Even for a character like Begbie, you have a wisdom or an atonement that's like, what? Surprising, but if you give it to Bobby Carlyle, he'll pull it off, he'll make you believe it."

It's undeniably an ensemble piece, which Boyle managed to make more explicit the second time around. He said, "The unpicked individual in the first one, if there is one, is obviously Renton's voiceover taking you through everything. So you think you're watching a one-person point-of-view film, but it's really a group film like this one. But when it became a true group film with no voiceover, which is the big, radical difference which people forget, that allows you to go, 'Right, explain yourself.'"

There's an underlying motif of delayed adolescence. "Men aging very, very badly," said Boyle. "We're terrible at hanging on to the past, in a way we wouldn't confess to, nor would we acknowledge that there's anything wrong with that, even if we were to confess to it."

That's also why the story concentrates on the male characters, as opposed to the returning female cast. Boyle found the characters demanded less time during the editing process, such as Shirley Henderson as Spud's long-suffering ex-wife Gail: Boyle actually cut out a couple of her longer scenes when he realized they undermined that she has one of the most powerful lines in the entire story. He said, "Their agency doesn't need to constantly declare itself like the men are doing. They just get on with bringing up these kids not to be like their fathers."

Behind it all was the original novel. Boyle said, "That book has stayed with me, and one of the ambitions of the film was to loop back to that, both in very practical terms, but also because of the feeling of the loop of time." Boyle called that sense "one of the consolations of age. Sometimes you realize that time isn't a straight line, and that it does loop back, weirdly. Whether that's a delusion or not, that it's sent to comfort you, I dunno."

T2 Trainspotting opens this weekend. For review and showtimes, see our listings.