It's old gods vs. new in Starz adaptation of Neil Gaiman novel

"Nothing is as easy as it seems in this show," actor Ian McShane said of American Gods as the Starz series opener premiered at South by Southwest on Saturday. 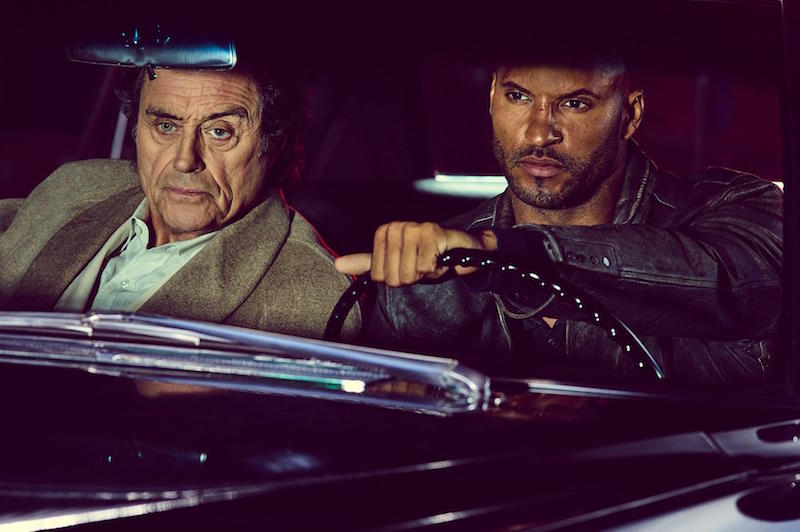 McShane joined much of the cast and show creators Bryan Fuller (Hannibal) and Michael Green (Kings) after the screening to a packed house at the Austin Convention Center. Based on Neil Gaiman's 2001 novel of the same name, its eight-episode TV run begins April 30.

Directed by David Slade (30 Days of Night) in a comic-book tone with extreme high definition, lots of spurting blood, and solid acting, the opening episode offered only a taste of this interpretation of Gaiman's sprawling novel. In this curtain-raiser, Shadow Moon, portrayed by McShane's fellow Brit Ricky Whittle, is released from prison to news that his wife was both unfaithful and very dead. Then McShane's character Wednesday, on the surface a common hustler, offers him a job. The true story? Wednesday is actually the god Odin gathering together the old gang – gods from every religion imaginable – to take on the new gods, creatures like Media and Technology.

The first episode shows promise with its mix of blood-soaked fantasy and very harsh reality. A shocking and humorous highlight: An online dating site brings together a middle-aged wonk (Joel Murray) and the goddess Bilquis (Yetide Badaki). She eats him whole, bones and all, and she doesn't use her mouth.

Fuller said Gaiman demanded a certain level of loyalty to the source material, including keeping the cast racially inclusive. But the show's success hangs on Whittle, who is imposing, compelling, and clearly up to the task.

The show comes to the small screen at an appropriate time in American culture when we are questioning our new "gods" and rejecting old ones, Fuller said. Hardcore Gaiman fans will see the novel's characters fleshed out, while others will delight in the casting, including Crispin Glover and Orlando Jones, both on hand for the screening. Glover said Gaiman's writing attracted him to the project. Jones said he sees his character Mr. Nancy (Anansi from African folktales) as grounded in the belief that "our differences bring us together more than tear us apart."