Let's All Go to the Movies

Skip the multiplex: Austin has a better idea

Austin has movie multiplexes, sure, same as any city, but it also boasts more unique opportunities to get your cinema on – in historic settings, with starry special guests, or just under the stars. 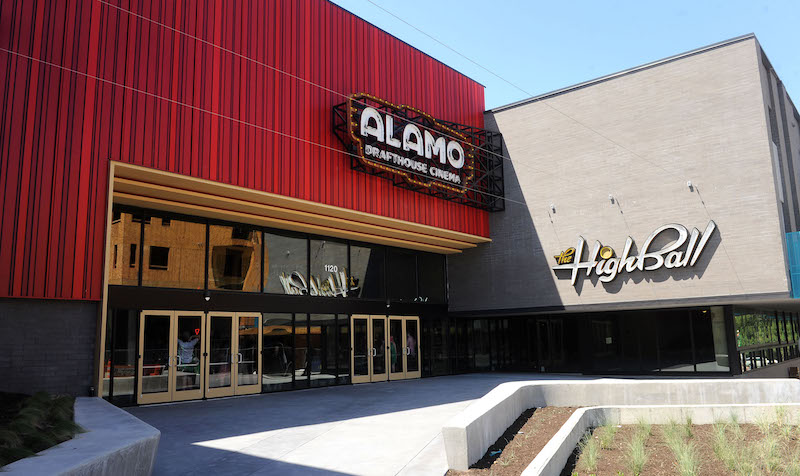 Founded in Austin in 1997 by Tim and Karrie League, the Alamo Drafthouse has grown into a national chain without ever losing sight of its central mission: to present a truly kickass moviegoing experience. This is the home of “don’t talk, don’t text” (the Drafthouse’s PSAs are legendary), but that doesn’t mean this is a no-fun zone: The Alamo’s programmers are always cooking up inventive events, including sing-alongs, themed feasts, movie marathons, and filmmaker Q&As. 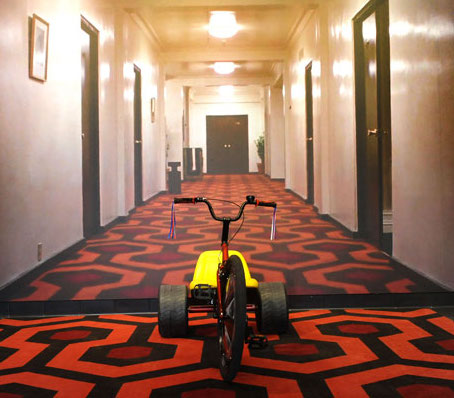 There are now five Alamo locations in Austin, and they all offer in-theatre dining, brought to you by the Alamo’s storied ninja servers; most locations also have an attached bar.

The Alamo South Lamar (1120 S. Lamar) is not the original Alamo Drafthouse (that honor goes to the now-lost site on Colorado) but it’s known as the mothership for a reason. World famous as the home of Fantastic Fest, its nine screens hold a total of 975 guests. You’ll want to take a snap in the lobby with the Shining-themed tricycle. Next door is the full-service Highball Bar, featuring a live music stage and seven bizarrely (awesomely) themed karaoke rooms.

Point in pretty much any direction and you’ll find another Drafthouse: the Alamo Village location (2700 W. Anderson) in North Austin, Alamo Lakeline (14028 U.S. Hwy. 183 N.) in far North Austin, Alamo Slaughter (5701 W. Slaughter) in Southwest Austin, and the centrally located Alamo Mueller, the first local Drafthouse east of I-35. (Pro tip: If you're traveling with kids, this one's made for you: During the day there's a kid-friendly playroom called Barrel o' Fun – at night it turns into Bar o' Fun for those of us who are just kids at heart – and it's an easy walk to the nearby Austin's children's museum The Thinkery and a park playground.)

The Drafthouse has also put on some pretty epic moviewatching experiences under their Rolling Roadshows shingle – including Goonies in a cave with Corey Feldman, a scarily interactive "Jaws on the Water," and a Hill Country Flyer rail trip to see Bong Joon-ho's Snowpiercer. 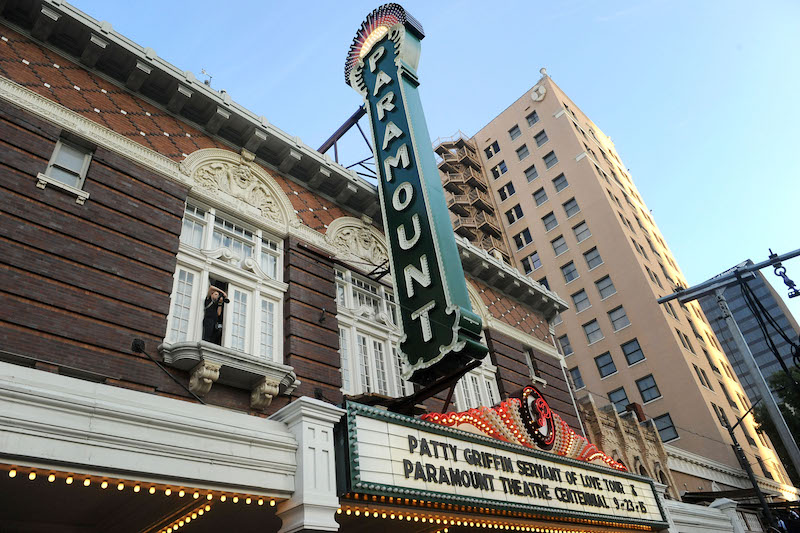 The grande dame of Austin theatres, the Paramount (713 Congress) celebrated her centennial in 2015 by installing a re-creation of the original light blade, a fitting beacon for this opulent but unpretentious soul of Austin arts. Somewhere in the vicinity of 10,000 artists have performed here, including Harry Houdini spitting needles in 1916. The palatial décor encases a surprisingly intimate 1,300-seat venue that plays host to marquee film premieres during South by Southwest and the Austin Film Festival, as well as the long-running and much-loved classic film series in the summer. 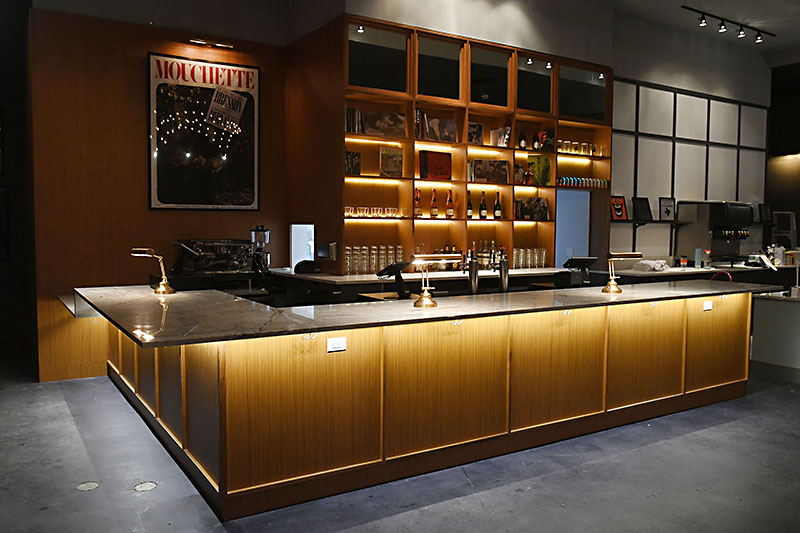 The bar at AFS Cinema (photo by John Anderson)

Owned and operated by the Austin Film Society, AFS Cinema (6226 Middle Fiskville) opened in spring of 2017 following an extensive renovation. Features include two screens, a bar and lounge, event hall, and vintage posters from the collection of AFS Founder and Artistic Director Richard Linklater – and, of course, the standout programming of arthouse, world, and classic cinema we’ve come to love. A cinephile's haven, you'll find your people in the lobby post-screening, eager to gab over the newest Koreeda film that just knocked your socks off. 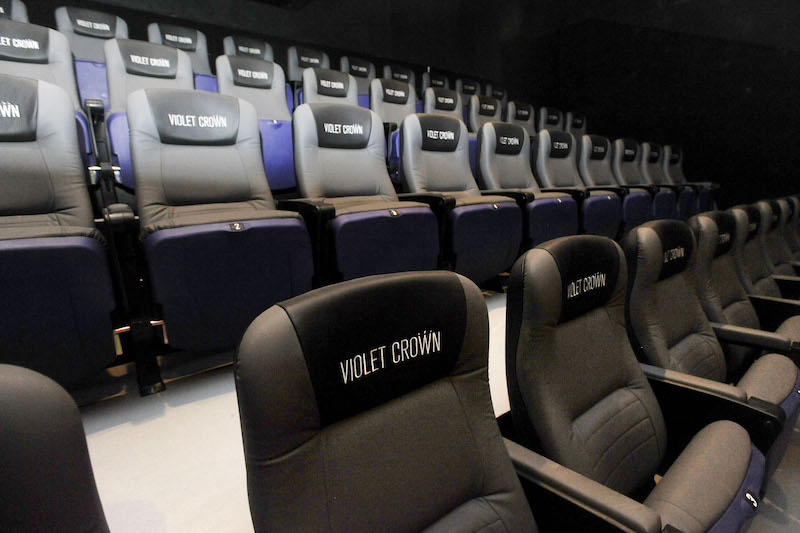 The flagship in a growing national chain, the Violet Crown (434 W. Second) offers a sophisticated way to take in first-run arthouse and foreign film fare right smack in Downtown’s bustling Warehouse District. Order food and cocktails out front and either eat them in the welcoming bar/cafe or take them into one of four cozy theatres to enjoy with the movie. Seats are reserved; buy tickets early if you want to claim one of the front row’s cushy recliners. 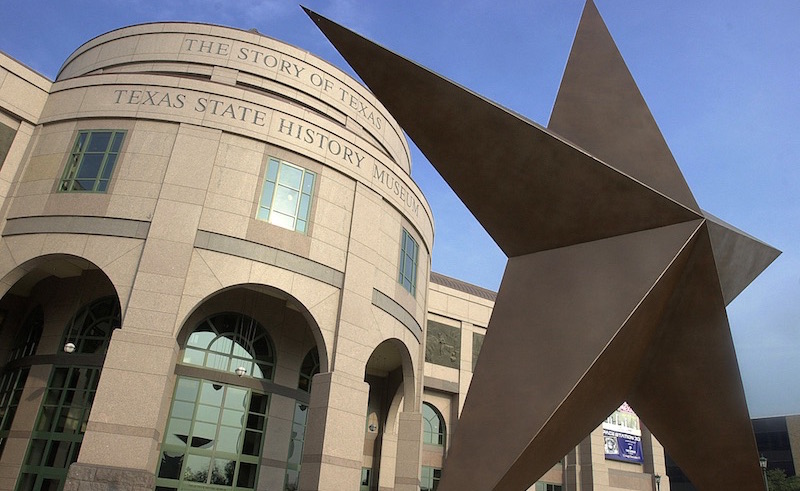 After spending an afternoon wandering the three floors of the Bullock (1800 Congress), located across the street from the University of Texas campus, there’s nothing better than sinking into a seat in its IMAX theatre – the largest IMAX screen in the state, presenting both first-run features and IMAX documentaries. Want to know the story behind the shipwrecked 17th century La Belle, the hull of which takes up a sizable chunk of real estate on the Bullock’s first floor? The short film “Shipwrecked” shows daily on the Bullock’s second, more intimate on-site screen at the Texas Spirit Theater. 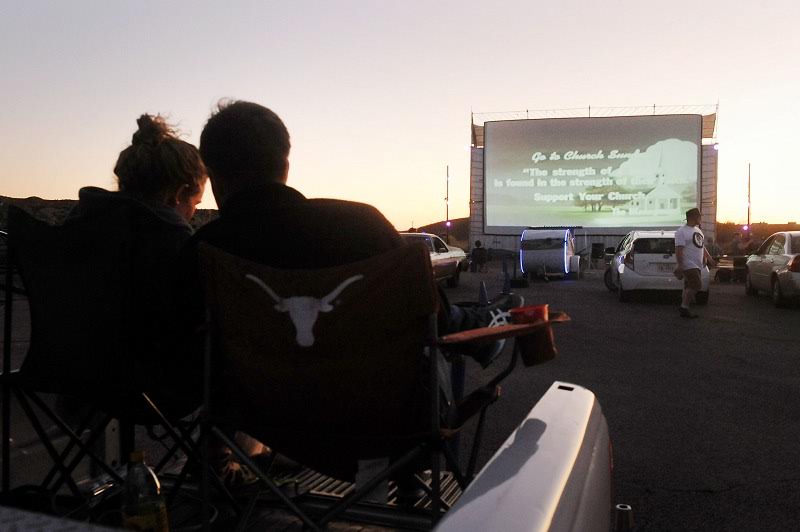 This retro favorite has been around for a while, but demand boomed for the Austin chain during the pandemic. Screening a mix of new and classic/cult movies, Blue Starlite sprouted new locations during the pandemic and invested in top-of-the-line equipment. Going car-less? Walk-ins are allowed, and concessions vary by location.

Visit the Chronicle’s Film Listings to find out what’s playing in Austin today. 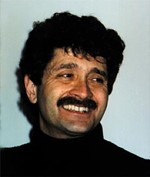