Fort Worth native Bill Paxton may be best remembered as starring in some of the biggest blockbusters of all time, but he had indelible turns in independent film, too. The Alamo Drafthouse is paying tribute to the late actor with special screenings of two of his lesser-seen roles.

Paxton, who passed away suddenly on Feb. 25 at the age of 61, exuded an everyman quality both on and off the screen. As Patrick Taggart put it in a 1997 Chronicle interview with Paxton: “It's not that the face lacks appeal; quite the contrary. It's just that its comfortable, unthreatening ordinariness suggests the boy next door, that nice guy in school whom girls flock to not for hair and muscles but for an unmistakable aura of decency.”

Throughout his career, Paxton toggled between massive studio productions, including Aliens, Twister, Apollo 13, and Titanic; acclaimed indie fare like One False Move and A Simple Plan; and lauded television work, including HBO's Big Love and The History Channel miniseries Hatfields & McCoys. In 2002, he made his directorial debut with the Southern Gothic horror Frailty, starring as an axe-wielding religious fanatic and single father. At the time of the film’s release, Paxton explained to the Chronicle what drew him to the material:

“I’ve always liked my horror neat, you know? I remember the classic horror films that I grew up watching on television and that my dad would take me and my older brother to see at the theatre. I remember the first time I saw Psycho, and there were a lot of movies where the children were put in danger and a lot of the horror was derived from the emotional investment in the kids.”

The Drafthouse will screen Frailty at the Alamo Ritz on Thursday, March 2, at 7:30pm, followed by a 10:15pm screening of Kathryn Bigelow’s 1987 cult classic Near Dark, in which Paxton played a gleefully psychotic vampire. Proceeds from both screenings will benefit the American Heart Association. 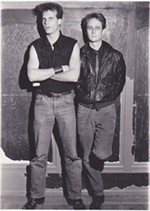