Getting stranger with Kino Lorber, plus slime mold! 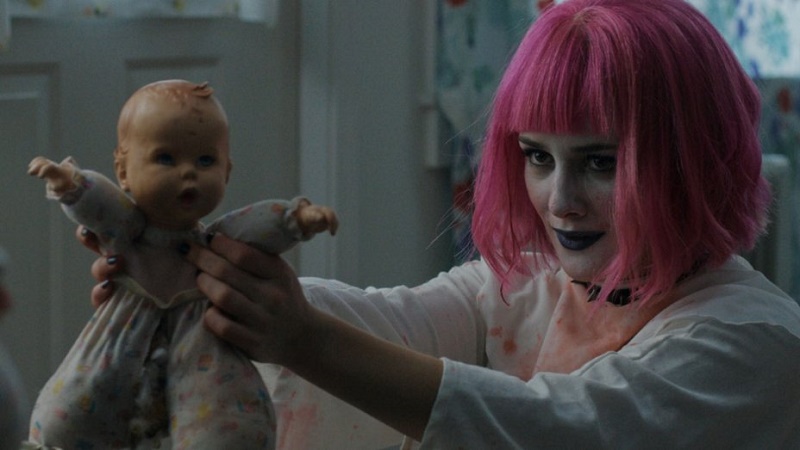 You can't choose your family, but you can choose your hair color in Little Sister, out on Blu-ray and VOD now.

When the going gets weird, as Hunter S. Thompson surmised, the weird turn pro. Or, as in offbeat indie comedy Little Sister, they head for home.

It has the makings of a standard homecoming dramedy, with Colleen (Addison Timlin, The Town That Dreaded Sundown, Love & Air Sex) returning to the family domicile after her brother Jacob (Keith Poulson, Somebody Up There Likes Me) suddenly makes his own unexpected appearance.

Yet there's a lot more on the line than the standard "you can never go home again" narratives, and neither sibling classifies as the returning black sheep. Jacob is a war veteran whose face has been mostly burnt off, while Colleen has cut off all contact with her family when she ran off to be a nun. They're not the goth kids that used to go to Gwar gigs anymore, even if heading homeward gets Jacob back to his drums, and novice Colleen reaching for the Manic Panic Cotton Candy.

It's a bittersweet concoction of deferred adolescence, and the legacy it leaves on kids of all ages is made all the funnier and more poignant by the supporting cast. Everyone here is an adult, but the worst self-indulgences are deliriously concocted by Ally Sheedy and Peter Hedges as the siblings' woefully irresponsible parents (still disappointed their formerly rebellious daughter never became a lesbian satanist), while Barbara Crampton steps away from the horror oeuvre as the increasingly frustrated reverend mother, contending with the loss of a potential nun and her car.

Its delicacy makes 2013's White Reindeer seem evermore like a transition movie for director Zach Clark. Previously, he had wrapped his blackly comedic sensibility in John Waters-style shock tactics. In some ways, Colleen can almost be seen as his avatar, a little mortified by those adolescent fixations but still on the run from the mundane. 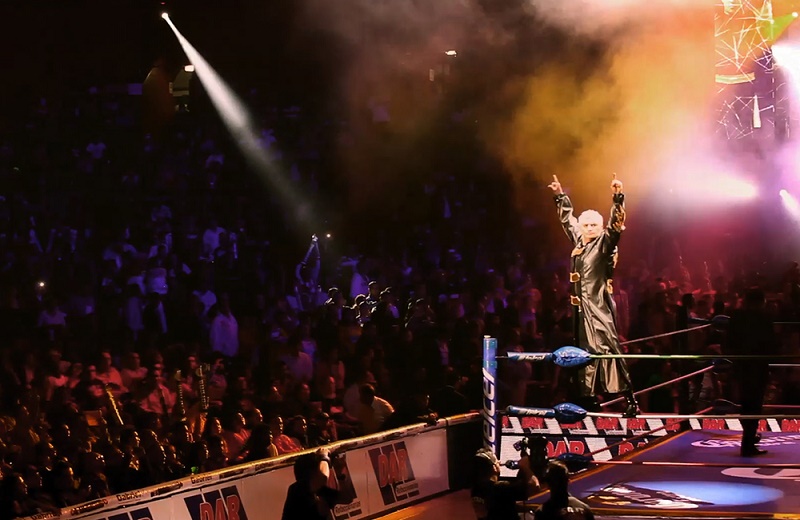 Beyond the mask: luchador Shocker takes to the ring in documentary Lucha Mexico.

Much like gothery, for many people pro wrestling is something to be dumped when leaving adolescence. However, as documentary Lucha Mexico shows, grappling is wedded into the culture.

Actually, this release is technically a tag team, with a second, shorter documentary Round Two included on the disc. The heavily-muscled backbone of the main feature is José Luis Jair Soria, aka Shocker, one of the main event stars of CMLL, one of Mexico's top promotions. Yet when he finds himself on the sidelines after basically tearing the patella off his knee, the camera turns to a multiplicity of surrounding performers.

The underlying theme is the clash between the fantasy of life as a high-flying masked luchador, and the slog of life in the ring. From that perspective, Round Two actually feels a little more effective, as if directors Alex Hammond and Ian Markiewicz (Better Than Something: Jay Reatard) were a little more in contact with the material, and the role luchadors play in Mexican culture, by the time they came to this rematch. While the main feature has more time to take on the breadth of Mexico's massive wrestling scene, they occasionally become overwhelmed by the sheer depth of their topic, and it lacks focus.

For fans of wrestling, it's a quick reminder of how quickly the industry changes. While Hammond and Markiewicz play a little loose with their chronology, since shooting began in 2010, any of the performers featured have moved on from the roles they fill here: Jon "Strongman" Andersen has basically retired, Sexy Star is a headliner in the U.S.-based Lucha Underground, the tattooed man-mountain Giant Bernard is a glasses-wearing trainer in the WWE, and then there are the deaths. That may be the most depressing part of the story, the attrition rate among performers.

The seminal U.S. wrestling documentary Beyond the Mat dealt with the same issues, but there is an underlying sense that, while America's sports entertainers are fighting to be great performers, luchadors feel the weight of a cultural obligation. "We are legends," Blue Demon Jr. explains, "and legends never end." 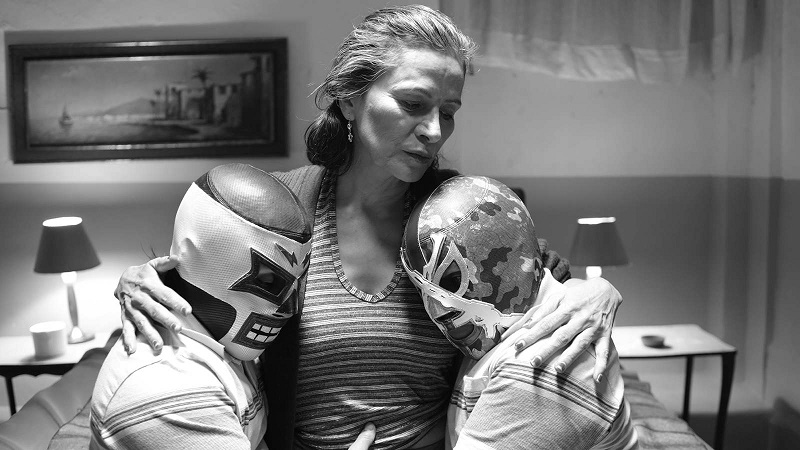 By comparison, Bleak Street (aka La Calle de la Amargura) uses the lucha scene as the launchpad for a rocket sled to misery. Set in the Mexican slums, its shifting coterie of protagonists find themselves at the bottom of a grimy barrel. Pimps, hookers, thieves, liars, all contending with hopelessness.

The script, penned by director Arturo Ripstein's longtime collaborator and wife Paz Alicia Garciadiego, draws on the real-life murders of Alberto Pérez Jiménez and Alejandro Pérez Jiménez, aka La Parkita and Espectrito II, two luchadores that worked in Mexico's Asistencia Asesoría y Administración wrestling promotion's Mini division. They are the lowest on the totem pole, but there is still someone to be jealous of them: two aging prostitutes who think stealing the wrestlers' match purse will drag them out of poverty's grasp.

Everyone in this grayscale slum is jealous of everyone else for what they perceive as their little slice of sunshine. The brothers contend with being paid less than the headliners they are paid to imitate, while the wrestlers grumble that they have to work to win the crowd over, their tiny doppelgängers get the cheap pop. Even the prostitutes envy the beggars for their easier payday.

While he cut his teeth with Luis Buñuel, Ripstein's depiction of soulbreaking squalor has the most modern kinship with Aleksei German's bizarre high-concept sci-fi epic Hard to Be a God: the use of black and white, a gracefully sweeping camera among the backstreets of hell, the script delivered in low whispers, and the almost total lack of any sympathetic characters. Sympathy, no, but undoubtedly empathy, as everyone has fallen into an inescapable hell, and their crimes and depravity are a response to their situation. Would we be any different, Ripstein asks? 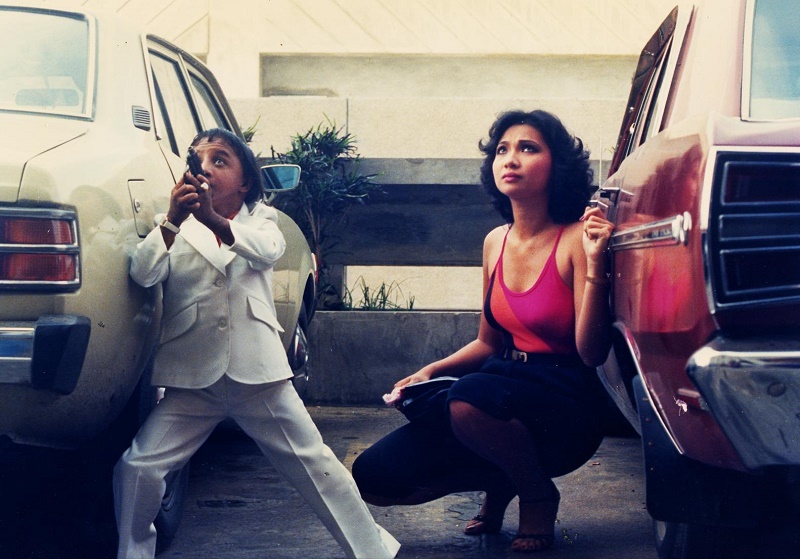 The hunt for an unlikely midnight movie icon in The Search for Weng Weng.

Mini-wrestlers are a curious cultural artifact of Mexican wrestling, almost as curious as the Philippines' most unexpectedly famous film export. 1981's bizarre James Bond spoof For Y'ur Height Only made an unlikely exploitation star of Weng Weng, the 2-feet 9-inch figure of mystery who made a couple of movies, and then seemingly disappeared without a trace. Well, until Australian documentarian/video store owner Andrew Leavold set out on this 30-year-old cold case, to hunt down the world's most unlikely action star.

This 2007 documentary (re-released in the wake of Leavold's 2015 film about Filipino actor Rudy Fernandez, The Last Pinoy Action King) is rough and tumble sometimes. It initially pales in comparison to Mark Hartley's hyper-kinetic and definitive guide to Filipino-shot U.S. exploitation cinema, Machete Maidens Unleashed! It also feels like it will be hard pushed to sustain a 90-minute runtime, especially when the hunt for Weng Weng seemingly comes to an unexpectedly brief resolution. However, that's exactly when the story gets interesting.

With the actor's fate revealed, Leavold sets about putting him into a much broader context. The story becomes less a Hartley-esque exercise in low-brow history, and much closer to that of fearless first-person documentarian Mads Brügger (The Ambassador, The Red Chapel). Unlike Machete Maidens, which reveled in the madness of American exploitation cinema's decamping to the Southeast Asian nation, he explores how this nation could produce a Weng Weng.

Hanging out in mall food courts with heroes of the era, even attending the strange birthday celebration of former despot Imelda Marcos, he chronicles the birth and slow decline of a nation's cinema, and how the tiny actor became both its most public face and the final curse on its hopes to be taken seriously as a creative hub.

Moreover, he pulls at the complicated threads linking totalitarianism and art. As one interviewee explains, when you're terrified to talk about politics, that frees up a lot of time to make a movie. 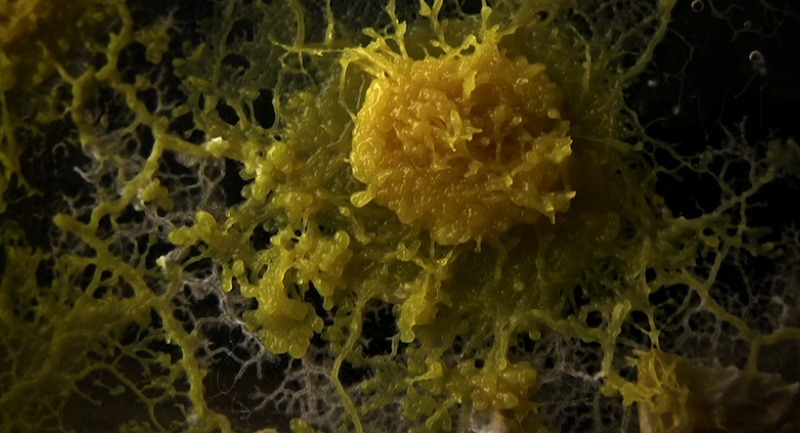 While we're getting weird, a quick advance heads-up about one of the most deliciously strange documentaries to play at Fantastic Fest (and that's saying something). With The Creeping Garden, directors Tim Grabham and Jasper Sharp took audiences into the slow-motion world of the slime mold, the extraordinary living entity that straddles the line between animal, vegetable, and fungus.

Like the mold itself (a single-celled organism that can suddenly just form up into a massive gang and crawl off like a caterpillar, or solve mazes), the documentary is a strange and beautiful hybrid, both rigorously scientific and quintessentially beautiful. Look for this to be released in an unbelievably gorgeous edition on March 14 from genre expert Arrow's new arthouse Arrow Academy sub-brand, including a remix of the soundtrack by former Sonic Youth producer/bassist Jim O'Rourke.

The Search for Weng Weng (Wild Eye Releasing) is available on DVD now.

The Creeping Garden (Arrow Academy) is available now on VOD, and the three-disc Blu-ray limited edition will be released on March 14.