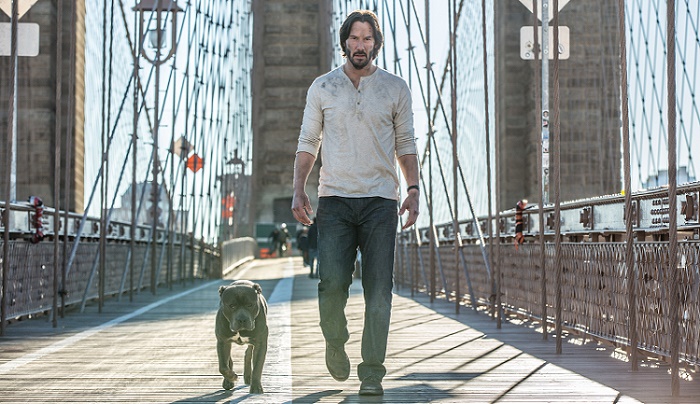 A man and his dog: Keanu Reeves and his (new) four-legged pal return in John Wick: Chapter 2. (Photo by Niko Tavernise)

Tales of redemption are about a bad guy with a good guy inside. But when the good guy emerges, the bad guy still lurks. According to John Wick: Chapter 2 director Chad Stahelski, that's why there are always so many mirrors and reflections in the film. "There's always two guys looking at each other. There's John, and there's John Wick."

In 2014's action smash John Wick, Wick (Keanu Reeves) was on a simple vengeance mission: Russian mobsters stole his car and killed his puppy – the last gift from his dead wife Helen (Bridget Moynahan) – and he murdered 84 of them in a monumental blood bath. Chapter 2 drags Wick back into the life of an assassin, traveling to Rome for one last hit. But wait. Wasn't the whole point of the first film that the man the mob called the Boogeyman had some kind of redemption, and was out of the life?

For Stahelski, who co-directed the original with David Leitch, that was the first problem: finding a good reason to get Wick back in the killer's suit. "For the first couple of months, when we were coming up with plot ideas, we were coming up with some pretty rough ideas. There were no aliens or anything, but we were going down some over-complicated stuff."

So he and writer Derek Kolstad turned away from finding the right plot. Instead, they concentrated on the real driver: Wick himself. He said, "John gets himself into trouble."

The original was Greek tragedy painted as urban legend, and for Chapter 2 Kohlstad and Stahelski returned to the core Greek narrative idea that destiny is inescapable. Into this, they injected an element from Joseph Campbell's seminal The Hero With a Thousand Faces: it's a hero's flaws that make them interesting. "John's a pretty fucked up guy," said Stahleski. "Because of who he is is why he's so good, but because of who he is is why he has to be so good."

The team had another hidden weapon. In the original, there is an implication of a much bigger criminal world. It's not just Wick and the Russians: There's a whole parallel crime economy, centered in New York around the Continental Hotel – a safe zone for the city's assassins and gangsters. John Wick implied there was much more going on, but didn't show it. However, Stahelski knew much of what was going on beneath the surface and off-camera because the creative team had assembled a massive dossier as a world guide – a trick he learnt from his time working as a stunt director with the Wachowskis. He said, "They painted the picture of alternate realities, through wardrobe, through how they lift a glass, through hairstyles, through the martial arts styles. So we took the same approach with John Wick."

The first film used a fraction of that guide, the second a lot more, with rival gang lords (Claudia Gerini, Riccardo Scamarcio, and Laurence Fishburne), equally gifted killers (Common and Ruby Rose), and a visit to Rome's answer to the Continental (run by Italian action legend Franco Nero). There's even a glimpse of where the iconic golden coins – the currency of this crime economy – come from. Yet there is a huge amount from the dossier left to examine, and Stahelski has left hints and traces of that bigger world in the sequel, just as he did in the original, that could still pay off. He said, "It bugs us when you see something that pays off in the next scene. Let it sit for a while." 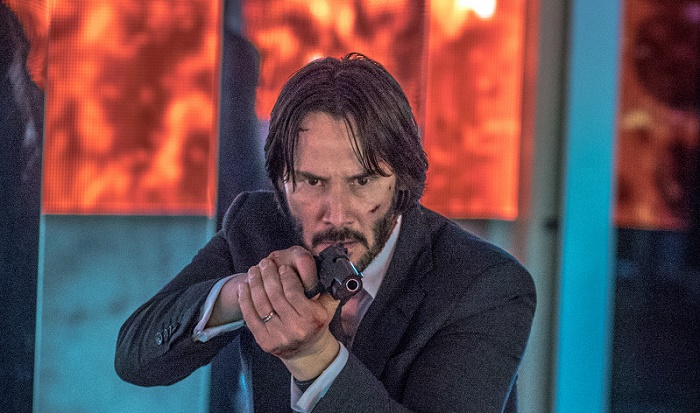 The new narrative also affected the fight sequences. Last time, Wick was a man on the hunt. This time, he's the hunted. Stahelski said, "If we want to expand the world, the world has to be bigger than John. John is just a simple cog in the wheel. He's good at it, but he's not the Terminator of our world. When we get to the action, J's going to ask me, 'Well, what's the character like in this one? Is he going to run through people?' No, actually, this one, I want to feel like, by the skin of his fucking teeth, he's just getting out."

That J is stunt director J.J. Perry, who called his approach to the action "tactical practical reality plus 10 percent. … It's not a Marvel film where he can fly and shoot rays. He's reloading after 30 rounds because it's a 30-round magazine, and we're counting them. He's got 18 rounds in his handguns, so we're counting them."

He and his stunt team trained Reeves in a combination of judo, jiujitsu, and sambo, plus rifle, shotgun, and handgun work, and the infamous gun fu from the first film. Perry said, "He's a very intelligent guy. His ability to retain choreography is second to none, and his work ethic is second to none. He's our starting pitcher. He can throw it hot, he can throw a fastball."

The demands of a sequel also demanded that the team create bigger and more impressive kills and fights. That includes a sequence in an art exhibition filled with mirrors and reflections that serves as both an homage to Enter the Dragon and an insight into Wick's shattered psyche. Stahelski called that sequence "the one that almost killed me. You've got to think about mirrors. It's a lot of work, hiding an entire crew. You can't just throw it to the VFX guys. You actually have to have a plan. When you have depth and parallaxes, sometimes you have to be a little sneaky. There's a lot of guys hiding behind other things that you can't see."

The setting also represents the continuing dichotomy of John the grieving husband, versus John Wick the stone-cold killer. If Helen had never died, could he really have kept his guns holstered? Stahelski said, "My interpretation is, he can stay out, but would he ever be a whole human being? I think by force of strong will and commitment, he would stay on a certain path, but it wouldn't take much to push him off. If someone did kick his puppy or someone were to disrespect Helen, I think John would relax for a second and go have a word with them in the back alley."

John Wick: Chapter 2 is out now. See review and screening times on our listings page.

For more on the original John Wick, read our 2014 interviews with Stahelski and co-director David Leitch ("Don't Shoot the Dog") and stars Keanu Reeves and Adrianne Palicki ("Everybody Was Gun Fu Fighting").