Four Zeppos, no Groucho: The worst Marx Brothers homage ever in Death Machines.

The Seventies were the golden age of Asian action cinema repackaged as U.S. exploitation, meaning there's a rich seam of voiceover and foley-tastic flicks ripe for a modern restoration. Why 1976's bizarre mafia martial arts Death Machines gets the digital cleanup so fast may mystify.

True, it is the directorial debut of filmmaker/James Bond-inspired motivational speaker (no, really) Paul Kyriazi, who went on to inflict such bottom-of-the-VHS-shelf masterpieces like Ninja Busters and The Weapons of Death. It also gets points for the laziest naming of characters ever, with White Death Machine (Ron Marchini), Asian Death Machine (Michael Chong), and Black Death Machine (Joshua Johnson). Somewhere in a Los Angeles backyard passing as a Japanese martial arts school, Madame Lee (model-turned-actress Mari Honjo, sporting a gravity-challenging beehive hairdo) recruits them to be the backbone of her new assassination network.

Part of the problem is that the Death Machines have all the combat prowess of Rudy Ray Moore in Dolemite. However, unlike Moore, the trio can't blame their shabby kicks on staggering around on four-inch platform winklepickers. Fortunately, they have a seemingly endless stockpile of rocket-propelled grenades that they use to dispatch their targets, making it less obvious exactly why they needed to get a yellow belt in karate.

However, their lack of fighting skills does allow Kyriazi to stumble into one of the most inadvertently hilarious narrative techniques imaginable. Several of their kills involve their target (initially, rival hit men) prepping for a murder of their own. Suddenly, at great distance in the background, the three Death Machines will appear, saunter over, blow shit up, then pack up and head off. Or, on one instance, just drive a car through a restaurant wall. Kyriazi's decision to just lock the camera off while the action unfolds is less evocative of, say, Henry Silva in Il Boss than Michael Palin running over the sand dunes as the "IT'S!" man from Monty Python's Flying Circus.

What follows is a scarcely coherent mishmash of martial arts, and Frank the one-handed barkeeper (John Lowe), who may be the most ineffectual and whiny protagonist this side of Cousin Oliver. How he ends up as the romantic lead, with both his nurse and random passing go-go dancers somewhat begrudgingly falling for his … I guess you could call them charms, just befuddles. That said, the death machines themselves seemingly swapped all trace of character or plot development for being inexplicably bulletproof.

All that acknowledged, full points to Vinegar Syndrome for one of the most exquisite restorations and transfers of the year, although why Death Machines gets this treatment, and not one of the endless racks of unreleased Shaw Brothers flicks languishing in archives remains a mystery. Maybe it's the badass poster art, with the huge metal-teethed murder tower chomping innocents. Now that death machine, that death machine I would watch. 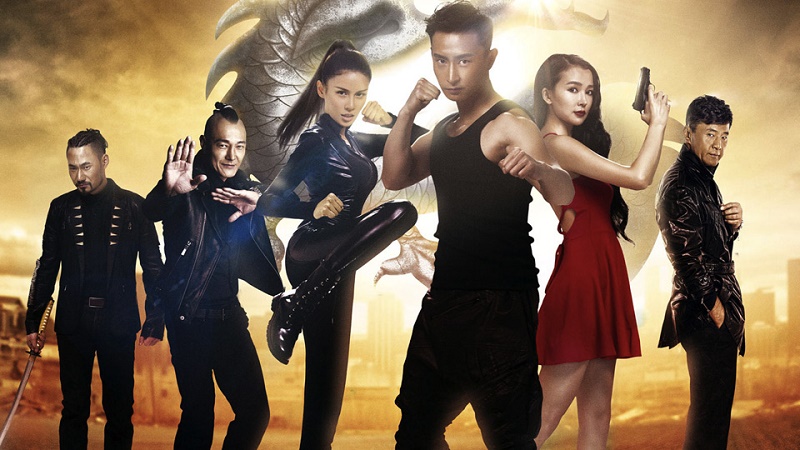 Forget you saw these faces, because no one looks like this in Jackie Chan Presents: Amnesia.

There are a few memorable moments in Amnesia – or more technically, Jackie Chan Presents: Amnesia, or, as it was originally called, Who Am I 2015. It's been touted as an updating of sorts of Chan's beloved 1998 action-comedy Who Am I?, but it's really nothing of the sort. The original featured the martial arts hero as a memory-wiped Special Forces operative in a globe-trotting escapade. Instead, it's Wang Haixiang as Li Ziwei, a bike courier who develops prosopagnosia. That's a rare condition whereby the sufferer can't recognize faces, and explains why the title had to be changed. After all, Ziwei knows who he is, but not anyone else.

There's a lot of potential there. When Ziwei gets dragged into a mystery involving a mysterious package, and ends up assisted by irksome hitchhiker Yao Xingtong (Yao Xingtong), he can never be sure who he is talking to.

It's a more complicated version of the mind wipe from the original, but Who Am I 2015 is so much smaller than the first version, and Haixiang is no Jackie Chan. That's no knock (after all, who is?) but the end result feels run-of-the-mill. Yes, Who Am I? was goofy and ill-structured, but Chan's raw charisma and amiability plastered over all those cracks. By contrast, Haixiang is an OK running-and-jumping leading man, but cannot ride out the woeful tonal changes, from silly comedy to action to a weirdly bleak third act, and an undeserved attempt to start a new franchise.

Take the revelation of why the gang is chasing Ziwei. It's oddly pedestrian and predicated on a ridiculous coincidence, a point not improved by the fact it's delivered by a clunky five-minute exposition. However, that's not the worst violation of the bond between action and audience: There is one of the most emotionally manipulative third-act setups in recent cinema, a pointless and unearned kick in the guts that just leaves a sour taste in the mouth. Even Jackie Chan couldn't have clowned his way out of that one.

Plus, bonus crime against cinema: None of the cast shots on the bad Photoshop DVD cover actually come from this film. When the legit release looks like a bootleg, it's time to forget all about it.

Paul Schrader (director of Cat People, writer of Raging Bull) throws out the rule book for Dog Eat Dog (IMES9), his hyper-nihilist and aggressively experimental adaptation of Edward Bunker's crime novel: worth the price of the Blu-ray just to see Nicolas Cage and Willem Dafoe back together. Read our interview with Schrader here.

Blair Witch (Lionsgate) was last year's most disappointingly underperforming horror, but this new Blu-ray release may resurrect this unfairly maligned addition to the Burkittsville legend. Read our review here, and our interview with director Adam Wingard and writer Simon Barrett here.

American Honey (Lionsgate) was one of the great divisive films of 2016. The unlikely Fantastic Fest tale of runaways selling magazine subscriptions in the Midwest either won audiences over with its laid-back storytelling, or tested the patience of those who saw a great film drowning in a 160-minute edit. That said, everyone agreed on its timeliness and incisiveness. Read our review here, and our interview with star Sasha Lane here.