New chillers and shockers to get you through the season

Hell, as Jean-Paul Sartre so adroitly concluded, is other people. So while many people regard the holiday season as one for gathering with loved ones, for others it's a soul-crushing trip into the bosom of the beast.

So what better way to get over it all than seeing everyone get their comeuppance?

Never play with The Devil's Dolls.

If you're worried about re-gifting … then it's worth playing with The Devil's Dolls. Matt (Christopher Wiehl) thinks he's given his daughter a nice present, but what he actually gave her were the Colombian worry dolls drenched with the angst and anger of the occultist serial killer he just shot. Turns out, the murder bug is infectious, and everyone that comes near them turns into a misty-eyed, sweaty killer.

Much as with his 2011 redneck supernatural chiller Rites of Spring, director Padraig Reynolds comes across as a safe pair of hands on a shoestring budget. He brings back a lot of long-missed tropes, like the crazy old voodoo lady handing out ominous warnings, to give a warm familiarity. However, there are a couple of moments – including one pivotal to the narrative – that feel like there's a shot or an edit missing, leaving the audience to fill in blanks that aren't made clear for a couple of scenes or more.

That said, he does hit that lost tone of the late Eighties and early Nineties: not what too many retro Reagan-era projects go for, with "I had that toy" set dressing, but that sense that everyone and anyone could die. Like Candyman or The People Under the Stairs, there's a mournful malice as Matt realizes that his seemingly harmless error has a body count. 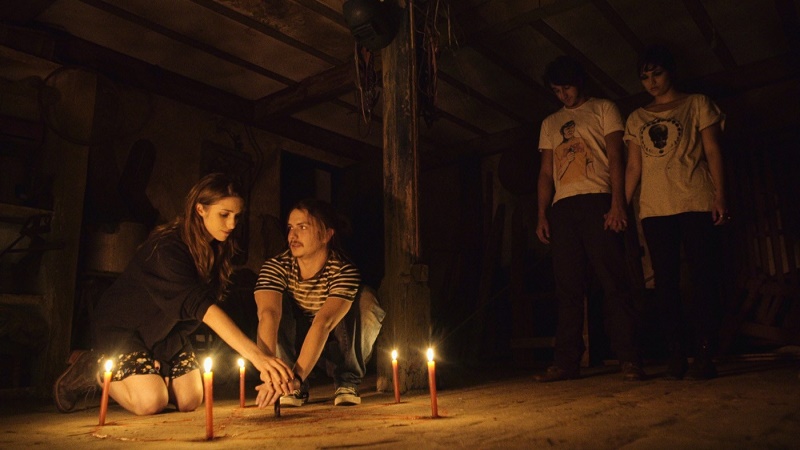 Never remove ancient nails from the middle of a pentagram. Wisdom from The Devil Lives Here.

If you want an excuse not to visit relatives … then Brazilian supernatural thriller The Devil Lives Here (aka O Diabo Mora Aqui) will have you exiling all drunken uncles.

Speaking of Candyman, there are more than a couple of fascinations the two films share: bee-keeping, folklore, and slavery. However, this isn't the American South. Instead, first-time feature directors Rodrigo Gasparini and Dante Vescio (the "M Is for Mailbox" installment of ABCs of Death 2.5) tackle the dark legacy of Brazil's plantation history.

It's a classic setup: some teenagers head to the abandoned ancestral home for a weekend of drinking and sex, when one of them has the bright idea to release the spirit of a cursed baby, supposedly stuck in the basement.

Successors to the mighty Coffin Joe, the grandfather of Brazilian horror, Gasparini and Vescio eschew the easy path of making a fake-Hollywood horror. Instead, this is grounded in Brazilian colonial, racial, and social structures. At the same time, their grasp of what is unnerving and disturbing is universal. The reference point may be last year's stomach-churner from Turkey, Baskin, which translated local convention into globally accessible horror. Also like Baskin, it really pays off on its eerie, opening slow-burn, taking a final act excursion into hellish delirium. 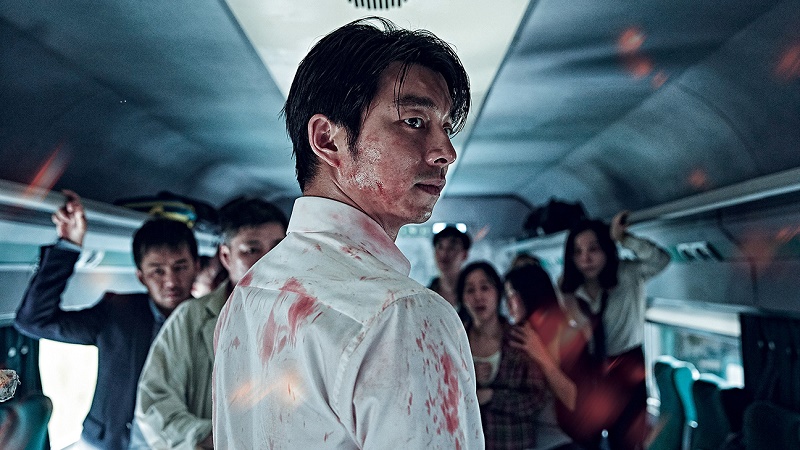 Always have your tickets out and your zombie-killing implements on hand on the Train to Busan.

If you hate holiday travel because of dealing with strangers … then Korean zombie flick Train to Busan will put you off public transport forever.

Everyone is looking for something innovative to do with zombies, and the obvious kink in the flesh-eating equation is location. In his live-action debut as a writer/director, Yeon Sang-ho (King of Pigs) locks his survivors in a speeding KTX (the South Korean equivalent of the Japanese bullet train).

It's a simple but ingenious decision that opens a swathe of opportunities. After all, the inherent claustrophobia of a train carriage, especially one going nearly 200 mph, lends itself to tension. Every incident, every tunnel excursion, every stop, becomes something you've probably never seen in a zombie film before. Even if you have, Yeon pulls it off. Honestly, his take on the roiling masses of zombies, flowing like an ocean, leaves World War Z floundering in the uncanny valley.

It also helps that he has a protagonist worth caring about. Well, not initially. Seok Woo (Gong Yoo) is a lousy father and, even worse, an investment fund manager, so pretty much nobody likes him. But his steady progression from selfish scumbag to self-sacrificing hero seems organic and heartwarming, even amidst the endless hordes of twitching, growling flesh-eaters. And while we're giving advice, Never Open the Door.

If you're sick of unexpected guests … then Never Open the Door arrives under the most inauspicious of circumstances. A Blu-ray with a gray and white cover that looks home-printed, self-released by the producers. That's as low-rent as low-budget gets. But, and here's the real kick to the cineastes, it's actually a lot of fun. Pittsburgh director Vito Trabucco reunites his team from 2012's silly-gory schlock romp Bloody Bloody Bible Camp for a surprisingly smart and original mystery.

It's another pretty simple setup: Two couples and their two single friends are having a dinner party in a snow-covered cottage, when a mysterious stranger arrives, and with his dying words tells them, "Never open the door!"

Of course, it's far too late now, and they fall prey to a cavalcade of enough plot devices to fire up an entire season of The Outer Limits: viral transformations, silent cultists, time loops, doppelgangers, and hallucinations. None of it makes a lick of sense, but that's deliberate, and Trabucco's decision to bind it all together in a 65-minute package means that, for all its limitations of budget and resources, it's a surprisingly pleasurable slice of retro-mystery. 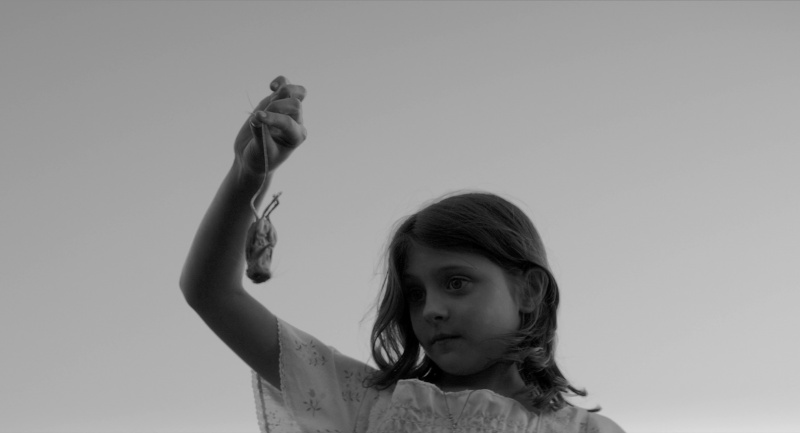 And never look into The Eyes of My Mother, either.

If you're terrified of spending too much time with your family … then The Eyes of My Mother may be the closest anyone has come to emulating the slow-boil disgust of modern literary goremeister Jack Ketchum (The Woman, The Girl Next Door) without it actually being a Jack Ketchum story. Like Trabucco, first-time writer/director Nicolas Pesce goes monochromatic for his unconventional tale of an unusual rural serial killer, but this time it's to distract from the copious bloodletting.

Francisca (Kika Magalhaes, with Olivia Bond as her younger self) is a simple country girl, raised with the practicalities of living on a remote farm. When an unexpected visitor (Will Brill) brings bloody mayhem to the family home, Francisca's true strangeness emerges. Maybe she spent a little too much time with severed cow's heads on the dining table, and her mother teaching her surgical techniques.

Writer/director Nicolas Pesce takes the traditionally male-dominated mythology of the emotionally dysfunctional serial killer, a la Ed Gein, and translates it to a female protagonist. Broken into four chapters, each charting Francisca's failed and murderous attempts to retain, then create a family, it's a bold and unsettling depiction of a mind in fracture.

The Devil Lives Here (Artsploitation) is available on DVD and VOD now.

The Eyes of My Mother (Magnet) is available on VOD now, and will be released on DVD and Blu-ray March 7.