It's a Wonderful Lie

Christmas movies usually come wrapped in a message: appreciate the little things; treat your fellow man with kindness; believe in Santa; don’t shoot your eye out. The moral of the story in 1945's less-canonical Christmas in Connecticut? Lie through your teeth, and lovely things may come to you. 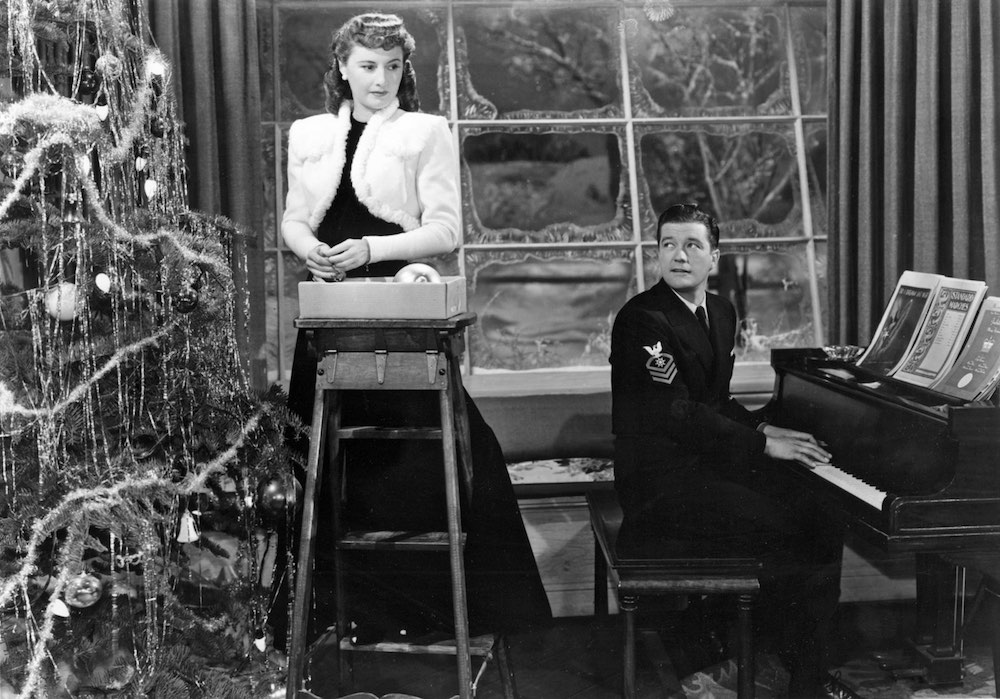 The pretty teeth in question belong to the incomparable Barbara Stanwyck, playing a magazine columnist named Elizabeth Lane. She’s nationally adored for her roast goose recipe and the aspirational picture she paints in the pages of Smart Housekeeping of a fantasy life of a housewife and mother, flipping flapjacks and cow-whispering on a Connecticut farm. The gag is that Elizabeth is in fact a single Manhattanite who can’t boil an egg to save her life but worked hard to buy herself a mink coat. Her column is a ruse – and a very profitable one, at that – but her publisher, Alexander Yardley (Sydney Greenstreet), has no idea his in-house domestic goddess is a merry fake.

The jig is up – or so it seems – when Yardley decides Elizabeth should host for Christmas a war hero, Jefferson Jones (Dennis Morgan). Elizabeth scrambles to save her job and produce her fantasy in reality, enlisting as co-conspirators Reginald Gardiner’s tightwad regular suitor – already in possession of a farm in Connecticut! – who leverages the situation to finally get a yes to his repeatedly denied proposals of marriage, and an emigré restaurateur named Felix, who adores Elizabeth to bits and does all her cooking on the sly. (He’s played – part-lion, part-lamb, and all-butterball – by the sublime and so-squeezable Austrian character actor, S.Z. Sakall, Stanwyck’s co-star in Ball of Fire; their sweet camaraderie here is another love story.) The three decamp to the tightwad’s Connecticut farm, where the intended quickie wedding keeps getting derailed, especially when the war hero Jefferson – a total dreamboat – arrives early. Suddenly that marriage of convenience is a lot less attractive when a real love-match is knocking at the door. The stage is set for a comedy of chicanery, with the bulk of the plot given over to a prolonged scramble to keep up the lie, even as a sincere love is blooming. (Or is it? Jefferson thinks she’s married – kinda kinky – and Elizabeth doesn’t know he’s already engaged.) Stanwyck is softer here than in her more acclaimed screwball roles (Ball of Fire, The Lady Eve), and it’s the right touch for such a feather-light romantic comedy. The Christmas theme is just tinsel (nobody’s making any speeches about angels getting any wings), but the holiday does occasion a sexy sleigh ride and a half-hearted carol. Jefferson – a piano dabbler on top of a being a decorated vet, a dreamer, and an artist – belts out “O Little Town of Bethlehem,” during which she woozes with lust while dressing a 10-foot tall Christmas tree; when he switches over to a smooth ballad, Elizabeth has to climb down from a ladder so as not to do actual bodily harm to herself.

Stanwyck walks the line brilliantly between smittenness and her essential, tangy self, and Morgan hints just enough of the rogue to suggest his Jefferson can go toe to toe with the real Elizabeth Lane. The movie concludes with the promise of domestic bliss – it was America in media res World War II; how else could it possibly end? – but Stanwyck and Morgan curl the toes of a straightforward script enough to suggest these two troublemakers aren’t betting on a farm. Maybe a Paris grotto? At the very least, a return to Elizabeth’s Manhattan apartment and her hard-earned mink. A hell of a life, I imagine.

A version of this story was originally published on Dec. 7, 2014.