DVDanger: I Am Not a Serial Killer

Director Billy O'Brien on adapting the story of a young monster 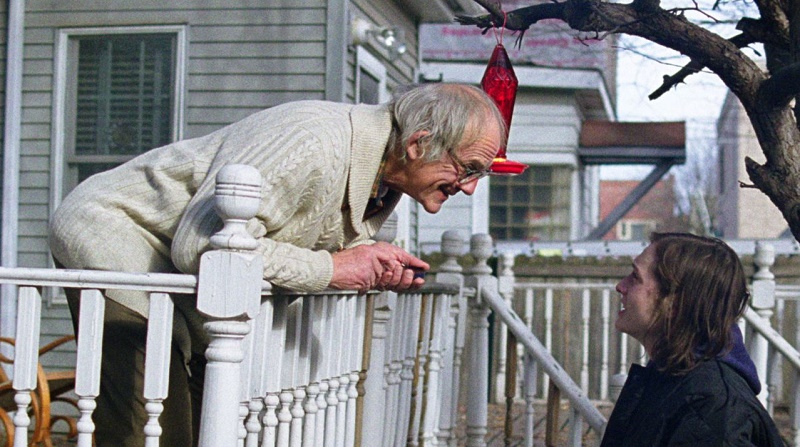 "The book is so soaked with Americana. ...That feel of the houses with the verandas, the snow, the heating plants." Director Billy O'Brien on adapting I Am Not a Serial Killer, starring Christopher Lloyd (left) and Max Records. (Image courtesy of IFC Midnight)

The innovative and genre-busting horror/thriller/black comedy debuted at SXSW this year (read our review here), but barely made it to its own premiere. Irish director Billy O'Brien said, "We were a week late getting the DCP over. We were desperately trying to finish it in time, so nobody had seen it."

However, fans of the original novel by Dan Wells were definitely eager to see it. The first of six stories about John Wayne Cleaver (Max Records, Where the Wild Things Are), the title is his ongoing mantra. A diagnosed sociopath, raised in a North Dakota funeral home, he's trying very hard to not become the monster everyone expects him to be. Fortunately, he finds a useful distraction: There's a killer on the loose, and John decides to capture him before he reaches the only people he cares about – his mother April (Laura Fraser) and his aging neighbor Mr. Crowley (Christopher Lloyd, Back to the Future). However, he quickly finds he's contending with more than a standard slasher.

O'Brien credits Irene Ilias for connecting him with the original novel. As a reader for producers, her job is to put the right literary property in the hands of the right director. She and O'Brien met at the famous Foyles bookstore on Charing Cross Road in London, so she could gauge his sensibilities. After coffee, he said, "I went off home, and she went around the corner, put her hand up, and found the book. She emailed me and said, 'You need to get this.'"

O'Brien did, and was immediately smitten, quickly sending Wells a letter to see if he'd be interested in an adaptation. "It's very unusual to find a book in paperback that good that hasn't been optioned by somebody." In the letter, he mentioned how the book evoked the black humor so common in Russian, Scandinavian, and Irish literature. "That hit a nerve with Dan, and we were off and running."

I went off home, and she went around the corner, put her hand up, and found the book. She emailed me and said, “You need to get this.”

However, this weird project about a 15-year-old potential killer and his 70-year-old friend was a hard sell to investors (O'Brien said, "You're always naive as a filmmaker, as in if you love something you can't understand why other people don't love it.") Yet, with a little seed money from the Irish Film Board, they headed to Bay City, Michigan, and shot some footage. O'Brien said, "That tiny test had everything that the feature has."

Even with a proof of concept, it took another five years to get all the pieces together. However, that worked to the filmmaker's advantage. When they shot the test, Records was only 12 – too young to play the budding killer. O'Brien said, "By the time we came around, he was 16 going on 17."

The delays had also seen potential names for the friendly but ailing Old Man Crowley come and go, until Lloyd signed on. O'Brien had the Taxi star on his wish list, and when he finally read the script, "He absolutely loved the character of Mister Crowley, the Gothic nature of it, the duality of it. He rang me, and we had a really good chat that must have gone over an hour where I could see he had really good notes, and he'd really done his homework."

With shooting imminent, there was one significant change from that old test footage. The production moved from Michigan to Minnesota, but there was an unusually mild winter, with only an inch of snow in Minneapolis. "We looked up at the Iron Ranges up near Canada, and the towns were very paint-peel, mining town, and luckily they always get snow."

What hadn't changed was that, even with an Irish director, Irish financing, and several Irish talents behind the camera, O'Brien said that he was determined to make it in America. Wells even asked him if he had thought about transposing it across the Atlantic, and while he admitted that the narrative seems universal ("It's a kid in a mortuary in a small town") that's not what attracted him. "The book is so soaked with Americana that we thought it would be a big shame. For us, it was always that feel of the houses with the verandas, the snow, the heating plants. The fictitious town of Clayton had such a life to it as a character."

I Am Not a Serial Killer (Shout Factory/IFC Midnight) is out on Blu-ray/DVD combo pack now. Also out now:

Staying in the funeral home, Fantastic Fest 2016 fave The Autopsy of Jane Doe (IFC Midnight) hits VOD and limited theatrical today. The English-language debut of director André Øvredal (Trollhunter) stars Brian Cox and Emile Hirsch as a father and son carrying out a postmortem on a body from a murder scene. However, the logic of the scalpel tumbles as the corpse reveals impossible secrets in this eerie and effective horror (read the full review here.)

Noir fusion The Frontier (Kino Lorber) played SXSW 2015, and finally gets a well-deserved and overdue Blu-ray release. It hits so perfect because it grasps, as Noir City Film Festival founder Eddie Muller explains it, that a noir is a "story where the reader can empathize with characters who are bad, who are doing something that's bad." Director Oren Shai strikes gold by bringing House of the Devil duo AJ Bowen and Jocelin Donahue back together as the eagle-eyed cop and the equally quick-witted criminal, dancing through the exploits of a band of ne'er-do-wells (read the full SXSW review here).

Throwback Eighties homage The Barn has been gleefully four-walling its bloody way across the U.S., and finally heads home. Read our interview with director here, then pick up a copy of the film, either on 2-disc special edition DVD or VHS, at www.thebarnmerch.com.

Finally, if you get a little spare change in your stocking over the holidays, then Operation Avalanche (Lionsgate) comes out Jan. 3. Reuniting the team behind unnerving POV drama The Dirties (Josh Boles, Matt Johnson, and Owen Williams), it was the second film this year to play off the old conspiracy theory that NASA hired Stanley Kubrick to fake the Apollo 11 moon landing. However, while Moonwalkers was a hijinks comedy, Operation Avalanche adds a new twist to the found-footage format by using it for a spy thriller.

The key to any found-footage or POV movie is having a good reason for the characters to keep the camera rolling at all times. Here, it's very simple: They are a bunch of overenthusiastic CIA analysts, initially seeking to impress their bosses. When they become the company point people on the faking, they want to document everything they manage. Finally, when the deal starts crumbling around them, they're documenting leverage.

Much like The Dirties, this doesn't reveal all its cards until really late, and by that point the cast and the audience are hurtling down a slippery slope. This is a period conspiracy thriller about proto-tech-bros, out of their depth and drowning fast. Unnerving, ingenious, intriguing, unmissable (read our full SXSW review here).