Blue Starlite Lights Up in Buda

Time to take the urban out of the Blue Starlite Mini Urban Drive-In. Austin's retro outdoor cinematic experience is relocating from the backlot of Austin Studios at East 51st, and moving to open land in Buda, to become the nation's first camp-out cinema. Founder Josh Frank said, "I want to do something that no one else has done before." 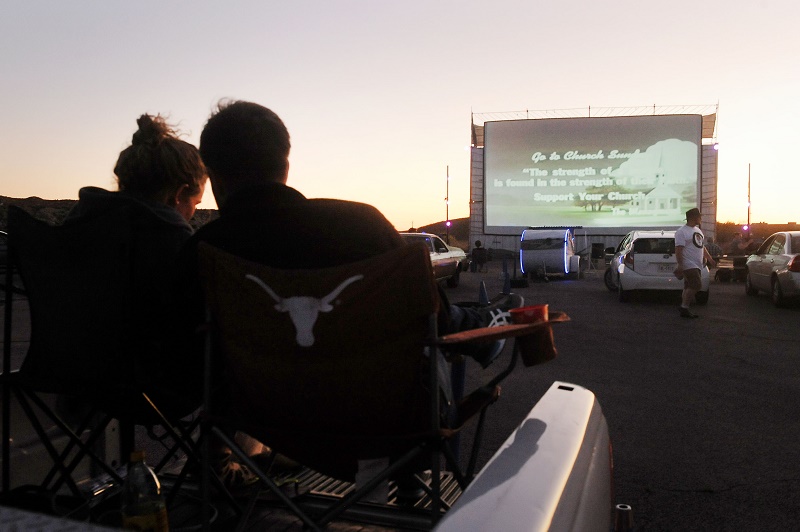 Say goodbye and hello to the Blue Starlite Drive-In, which rolls down to a new home in Buda (Photo by John Anderson)

It'll be a big change from the old location, on the old asphalt behind the studio, with its epic view of Downtown Austin. After the Starlite says goodbye on Jan. 7 with a double bill of Back to the Future and a The Muppet Movie sing-along, it'll be at its new home in time for Valentine's Day. Say hello to 11 acres just south of Austin city limits, with a creek in front of the screen and a pond for picnics. There will also be Camp Blue Starlite, a mixture of gypsy cabins, a luxury RV, and places for tents.

Add on a few sound and vision upgrades: the Starlite has launched a Kickstarter campaign to get the ball rolling on $15,000 worth of improvements. That'll pay for a larger screen, extra concession space, more classic drive-in speaker mounts, better bathrooms, an actual ticket booth, and best of all for cinema fans, a 35mm projector.

Yet, for all those changes, it will still be the same Starlite twinkling, with the same slots for 75 vehicles, plus seats and space for walk-up customers, the same kind of glorious retrospective screenings, the same candy and popcorn and speakers-on-the-window experience. Frank said, "We're still going to offer that same intimacy."

Blue Starlite first lit up the silver screen in 2010, in a parking lot near Juan in a Million. Soon after, Frank packed up his projector and shifted over to what was then food trailer nirvana at East Sixth. The next big move came a year later, when they set up at Austin Studios, and they've been on the backlot ever since.

The previous moves were in search of a better location, and while the Austin Studios partnership was a cookies-and-cream level perfect combination, the ongoing reconfiguring of the studio layout (which has been in place since before Blue Starlite moved there - see "The Changing Shape of Austin Studios," May 10, 2013) means that old backlot isn't going to be available anymore.

There were other, more central locations that Frank said he considered, but when he got to Buda, he saw something that no other site offered. Like the studio, there was the big, clear, open skyline that is a hallmark of the great American drive-in.

Plus, as Frank noted, it's Buda. It's not like Austinites have to drive to the seasonal Blue Starlite siblings in Florida or Colorado. When he started looking for a new location, it was Austin Film Society booker Lars Nilsen who suggested looking south, and that worked for Frank. He said, "I don't think about location, I think about vibes, and think about Austin in a much broader sense. … A lot of people in their 30s and early 40s, they've been in the Downtown scene, but now they're getting married and having kids, and they're moving to Buda and Kyle and even to Lockhart. When I found this place, it's literally right on the border of Austin. Hipsters are moving five minutes away, because they're all living in Manchaca."

Frank's hope is that the Downtown loyalists will still realize that it's not that far. He even has the numbers to prove it. Before signing on the dotted line, he drove repeatedly from Whole Foods on West Sixth to the new location, and timed the results: 15 minutes in light traffic, 20 minutes in medium, 25 minutes even in congestion. He called it "the best of both worlds. 15 minutes, you get people from Central Austin, 10 minutes you get people from South Austin, and now I get all these people from Buda and Kyle, and all these places that within the next five years are going to be the new hot spots."

Plus, if anyone doesn't feel like driving home after a double bill, how's about making it a triple bill, staying late on a Saturday, and either camping out or renting one of the gypsy cabins? For this, Frank was reminded of holidays at Echo Hill Ranch, the old summer camp founded by Kinky Friedman's father in the Hill Country. "I'm always playing with nostalgia, taking it and turning it into something new. So when I took the idea of the mini drive-in, and added this idea of the overnight option, the inspiration came from spending time at Kinky's camp."

And that's where the view comes in. Frank said, "It's just land, and a couple of farm houses on either side of us. Looking straight where the screen is, there's just a big expanse of sky. You go behind the screen, and there's just a hill going down, and more sky."

Here's Frank explaining a little more about the Kickstarter campaign. 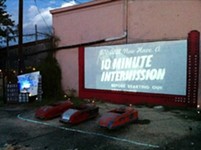