DVDanger: Horror for the Holidays, Part 1

Let's be honest, no one is really ready for the holidays this year. It's hard to get festive when it feels like the end times are just around the corner. So, in this new spirit of the season, here's some recent home release recommendations that draw on the ghosts with nothing to do with Christmas past. 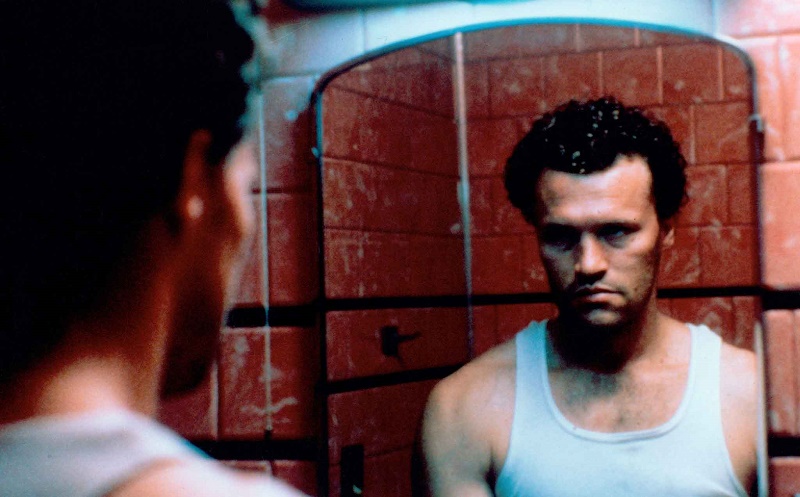 If you're looking to clear the room after Christmas dinner … you still can't get better than verité horror Henry: Portrait of a Serial Killer.

Directed by John McNaughton (Wild Things, Homicide: Life on the Street and the highly underrated The Harvest), starring a young Michael Rooker (Merle from The Walking Dead), and based on the real-life serial killer Henry Lee Lucas, it is unrelentingly brutal and gruesomely accurate.

Made in 1986 but unable to get a release until 1990, Henry is the film that put an end to the kitschy slasher. McNaughton demythologizes the killer as film antihero, showing Lucas as a grubby, amoral, violent scumbag, making the audience complicit in the crimes. That's why the "In Defense of Henry" documentary included here features cult film historian Joe Bob Briggs, filmmaker Joe Swanberg, and groundbreaking documentarian Errol Morris, all singing its praises as the landmark that it was.

It's a blue-collar nightmare, filmed in the kind of working-class Chicago that the real-life Lucas (a never better Rooker) and his partner-in-evil Otis (Tom Towles) could so readily turn into their murderous playground. That's exactly why it, among all its peers, truly deserves this lush 4K restoration from the original 16mm.

It is comparable in impact and intent to The Texas Chain Saw Massacre. Like its Lone Star precursor, it's been the victim of censorship (as chronicled here in another extra, the illuminating "Henry vs. the MPAA"). But it's also far less fantastical than Chain Saw. The legendary moment in which Henry and Otis watch a home movie of one of their own crimes is so aggressively subversive and yet so mundane that it has arguably inspired everyone from Michael Haneke to Swanberg's colleagues in what was called mumblecore.

There is nothing easy about this film. It starts bleakly and ends so. Yet that's why it stands as vital, and the 50-minute making-of is almost as irrelevant. This is a bunch of nobodies with $100,000 and a quick mandate to churn a low-budget horror movie, and what they managed has arguably never been equaled. 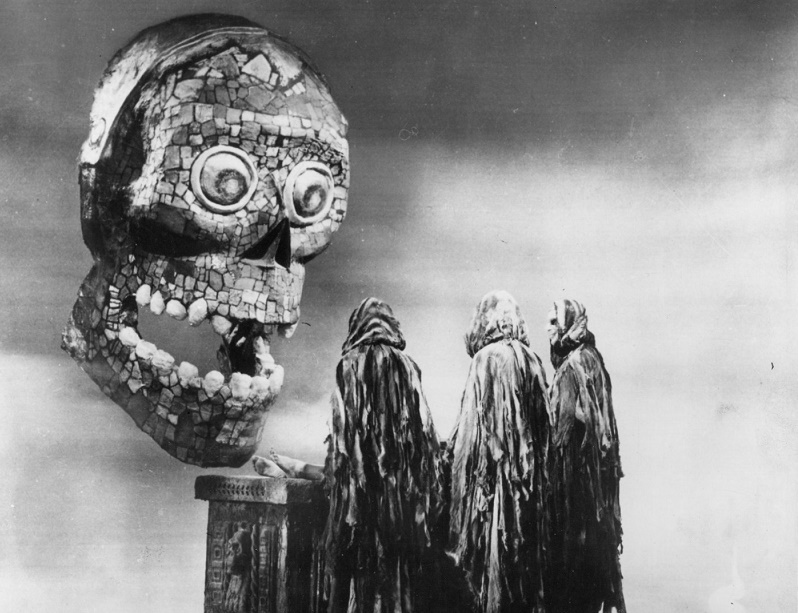 "Show me what you've got!" Psychotropic horror, Canadian-style, in The Mask.

If you're looking for Canadian psychotropic 3-D madness … then put on The Mask (aka Eyes of Hell).

A 1961 low-budget shocker, it has the dubious honor of being Canada's first-ever horror film. The audience is greeted by Jim Moran (played by Jim Moran, so presumably famous to Canadian audiences of the time), who declares himself in a bass monotone as "something of an authority on masks." That's handy, because he introduces the audience to the tale of Dr. Allan Barnes (Paul Stevens), a psychologist whose patient first murders a woman, then kills himself, but not before sending the good doctor a bizarre mask. Barnes doesn't call the police: Instead, he dons the fake face, and suddenly disappears into a world of Lovecraftian cult madness.

Bar its historic position as the first horror from our neighbors to the north, The Mask plays for much of its duration like a solid little Sixties psycho-crime thriller. The payoff is in the 3-D sequences, as the good doctor is driven insane when he dons the mask. With smoke, flying skulls, poking snakes, Aztec sacrifices as contemporary ballet, and a whole plethora of trick images representing the world that the mask reveals through its eye holes. Don your 3-D glasses whenever the voice instructs "Put the mask on NOW!" and it's like suddenly dropping from an Alfred Hitchcock Presents into a Coffin Joe story, or an outtake from classic Japanese supernatural bloodcurdler Kwaidan.

There's still some weight to the "real world" sequences, making pointed commentary about the Sixties' obsession with applying science to the mystical. There's also Claudette Nevins as Barnes' fiancée, delivering a histrionic meltdown speech that is really a heartbreaking scream to a victim of addiction.

This is also a visual treat throughout. Like Henry, a gorgeous restoration makes the cinematography of Herbert S. Alpert (assisted in the 3-D sequences by montage master Slavko Vorkapić) truly pop. The shadows are rich, the flames truly burn, and this ignored little black-and-white miracle could stand toe-to-toe with the best of Roger Corman's most psychedelic Poe 'adaptations.' 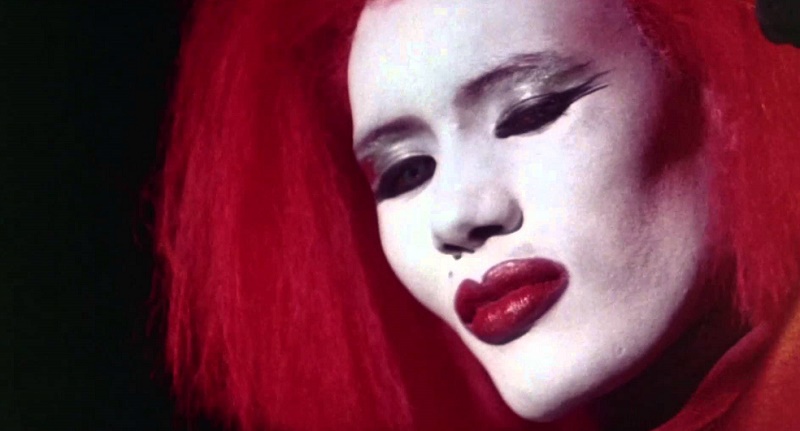 Creature of the night: Grace Jones in Vamp.

If you're looking for some pop-art insanity … it's hard to get nuttier than 1986's Vamp.

It's a simple enough plot: Two college kids (Robert Rusler and Chris Makepeace) head to the big city to find a stripper for a frat party, and end up in a sleazy joint where all the staff are vampires. The plot is so simple that any similarities to Robert Rodriguez's From Dusk Till Dawn (which was made a decade later) are probably wholly coincidental.

Vamp fits less-than-neatly into the pantheon of Eighties vampire flicks. It's too raunchy for teen fare like Lost Boys, too weird for more straightforward fare like Fright Night, and too quirky to match the cerebral and heartbreaking heights of Near Dark. Yet, while it's the odd duck of the era, it's so flamboyantly bizarre that it still deserves a place at the table.

Mostly, that's earned by its two female leads. Exhibit one: multifaceted artist Grace Jones as the vampire queen Satánico Pande … er, Katrina, who storms through the club with the creative aggression and sexuality that made her a most unlikely megastar and icon. Exhibit two: Dedee Pfeiffer as Allison, the stripper with a heart of gold. She may be the real reason that the film stands out, as while most such girl-next-door characters are stripping to get through college, or some such other desexualizing trick, she likes what she does. Never once in this film is the stripping the problem: it's the blood-sucking.

This being Arrow Video responsible for the release, the edition comes loaded with extras, not least the excellent "One of Those Nights" making-of. Director Richard Wenk's mixed emotions about dealing with Jones' entourage (let's just say having Andy Warhol on set is less fun than it sounds) is an unmissable moment in kitsch history. 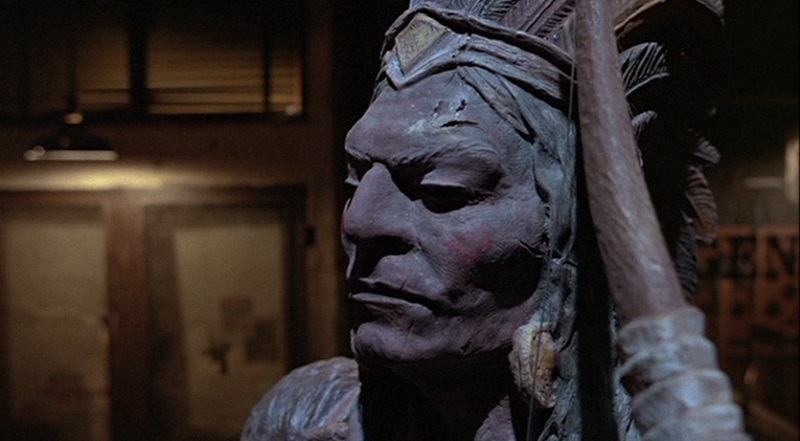 Look, it was the Eighties. Racial depictions weren't always that sensitive. But Chief Wooden Head is at least the hero in Creepshow 2.

If you're too full of Christmas food to concentrate … then anthology horror Creepshow 2 carves up just enough thrills per segment to stave off that post-lunch tryptophan coma.

The segments are still fine. It's just clear that the budget just isn't there. There are three segments rather than the five of the original (two further stories, "Cat From Hell" and "Pinfall" were scrapped, and made later as a Tales From the Darkside segment and a Kickstarter-funded indie project). The interlinking animated framing mechanism seems cheap, like a Heavy Metal outtake. Even Les Reed's synth score seems like a poor man's cover of John Harrison's work on the original.

Yet, for all those limitations, somehow the stories still shine. "Old Chief Wooden Head," about a cigar store wooden Indian that comes to life to avenge an evil against both the local tribe and the aging local store owners (George Kennedy and Dorothy Lamour, as a Dust Bowl Ma and Pa Kent), has heart, vigor, and Holt McCallany as the kind of villain that deserves the classic Creepshow comeuppance. Similarly, "The Hitch-hiker", starring Lois Chiles as a hit-and-run driver pursued by her increasingly gruesome victim, is the perfect depiction of the spoiled bourgeoisie.

The middle segment may be the most oddly successful. "The Raft" is the only story based on an extant King tale: First published in Gallery in 1982, then more famously in 1985's Skeleton Crew, it's incredibly simple. Four teens go swimming in an off-limits lake, only to be menaced by what seems like a semi-sentient oil slick. It sounds dopey, and the fact that the monster is a tarpaulin on strings may seem far from menacing. Yet the simplicity is why it works, as the eruption into some of Savini's most gruesome gore effects gives this semi-conceived sequel some surprising scares.

Henry: Portrait of a Serial Killer (Dark Sky), Vamp (Arrow) and Creepshow 2 (Arrow) are out on Blu-ray now.