DVDanger: If There's a Hell Below 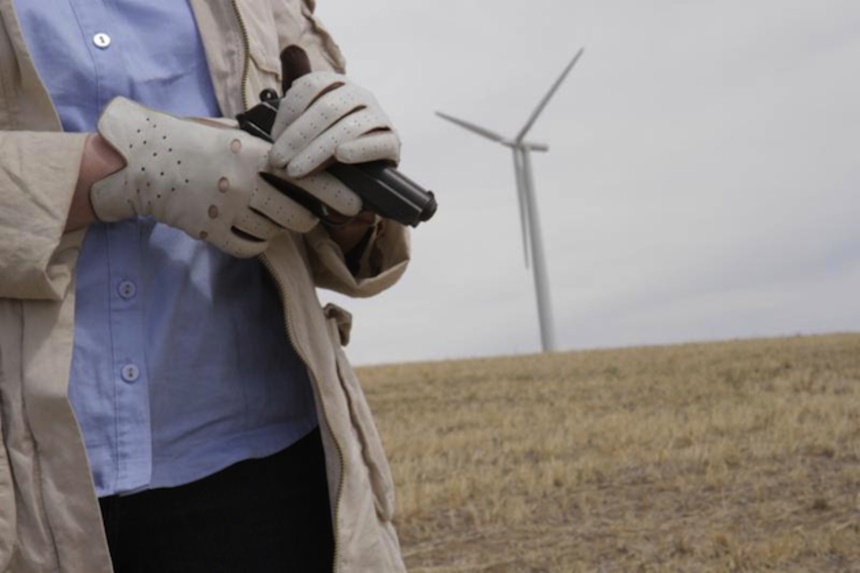 The era of the cinematic spy as dashing international jet setter is over. These days, they are either bare-knuckle bruisers with a sociopathic streak, or – as in new technothriller If There's a Hell Below – intelligence analysts with dark secrets in their archives.

The directorial debut of Nathan Williams eavesdrops on a meeting between young journalist Abe (Conner Marx) and a woman who calls herself Debra (Carol Roscoe). That's about as much her real name as Ms. Pacman, the nickname she's picked up in an unnamed security agency. The nickname fits: After all, she's trying to eat some spooks. She's a whistleblower, nervous and fixated, but her elaborate dance with the somewhat naive Abe could be the only thing to keep them alive.

The super-low budget thriller (effectively a two-hander road trip) is a spycraft tale with clear nods to John Le Carré. Williams said, "The Tinker Tailor Soldier Spy film isn't something I specifically drew on, but it's something that I watched 50 or 60 times. There's a reason it was a miniseries originally, and to compress it into a two-hour film is very impressive. Those books are so densely plotted, it's not like The Godfather, where you can cut sub-plots and not miss them. They're all interfused."

Austin Chronicle: The idea of a national security whistleblower, post-Snowden, post-Wikileaks, post-Manning, seems timely, but what was the genesis of the story?

Nathan Williams: We started with a fairly practical impetus. This was my first feature, and I had a sense of about how much money I could raise, and so my brother (Matthew Williams), who wrote the film with me, we set some boundaries for ourselves in terms of logistics and cast size. We had a sense we wanted to write something that was all daytime exterior, so we wouldn't have to light it. I would love to have the resources to do it – I'm not anti-night – but you have to embrace what you have. Don't write a symphony when you have a jazz quartet.

There's a lot of single-set movies, a cabin in the woods or one person's apartment in Brooklyn, and our idea was the set would be a car, and we would have a thriller that unfolded as the car moved through this landscape. Knowing that as our concept, building out who's in this car, and pretty soon we have two people who don't 100 percent trust each other.

Once we got into the theme of trust, then we connected with the Edward Snowden-type contemporary issues, but we didn't sit down to make a movie that's a response to national surveillance policy. That just came out.

AC: There are two long stories that characters tell; classic road-trip monologues. They feel like a diversion, but they're absolutely pivotal to where the story is going.

NW: It was something of a calculated risk, to take time away from the plot to engage in these stories that, on the surface, have nothing to do with the larger story. It was also a calculated risk that I wanted the stories to have the rhythm of actual people telling the story on a long car trip, which is different to a movie monologue, which has more of a structure and a rhythm. I wanted to have a banality to them, because you do go on these tangents when you tell a story in real life.

In terms of why are we dedicating this time, it's that these characters who are not directly stating their purpose, and are telling stories for a reason. There are details that will hopefully be embedded in your brain, and later will be triggered and hopefully make sense.

AC: Debra is a fascinating character, a real rarity as a woman who has survived in an IT and security environment that is historically pretty misogynistic.

NW: We knew pretty early that we wanted Debra to be female. She shows so little about herself, deliberately, that we had to make her as situationally interesting as possible. This is a woman in a field that is 95 percent men, and she's chosen to go into an area of national security that is not full of bleeding-heart hippie types. She is not that. She has some pretty conservative values, which makes that she is prepared to risk her life to do what she is doing even more striking.

We had to find the right person who could also very convincingly portray that level of intelligence. There are movies where Mark Wahlberg plays a scientist, and I just don't buy it. When someone plays someone who is supposed to have that elite level of intelligence, no matter how skilled they are as an actor, not everyone can do that. But Carol is extremely smart, and brings detail and depth to that character that I could never have written.

If There's a Hell Below (Dark Sky Films) is available on DVD and VOD now.