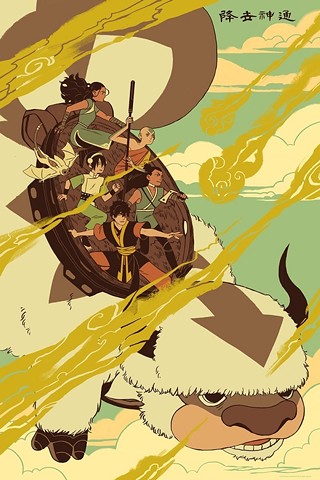 We are all Nickelodeon kids. It doesn't matter whether you grew up with Kenan & Kel, Drake & Josh, or Sanjay and Craig, the kids' TV channel with an edge has been warping minds for 39 years. Now Mondo Gallery adds its own graphic flair for A-Nick-Nick-Nick-Nick-N-Nick-Nick-Nick Nickelodeon Show.

The show, which opens this Friday, throws open the vaults on the network that slipped adult humor into seemingly innocuous cartoons, airing iconic underground classics like Invader Zim and true modern televisual masterpieces like Avatar: The Last Airbender.

Mondo Creative Director Mitch Putnam said that Nickelodeon "represented everything cool and rebellious, and parents didn't know anything about it. We worked with a number of great artists to pay homage to some of the channel's most influential programming. We hope you have as much fun seeing it as we had making it."

Everybody has a favorite Nickelodeon show. For Mondo creative director Eric Garza, it's Rocko's Modern Life. He said, "Something about some of the Nickelodeon shows of the Nineties, the humor was just on another level. Rocko in particular, he was just a weird, anxious wallaby, surrounded in this world of craziness that I thought was really bizarre as a kid, and even now. As we were preparing for this show, they released the complete series on DVD, and I bought that and blew through it in a weekend, and it holds up. It's so great."

Artist Dave Perillo, who heads to O-Town to catch the day-glo-psycho-craziness of Rocko's Modern Life, said he was "thrilled to be part of the Nickelodeon show with Mondo. I grew up watching Nickelodeon when my family first got cable in the early Eighties, with shows like Pinwheel and You Can't Do That on Television."

The great rival for Rocko's claim to be Nick's weirdest creation was always Ren & Stimpy. Garza said, "I can't believe that show was on Nickelodeon. The humor was so bizarre. At the end of the episode 'Svën Höek' they died and go to Hell. They whiz on the electric fence, and the last shot is the Devil saying, 'So, you whized on the electric fence, didn't you?'"

Of course, the out-there humor and aggressive surrealism of such shows brought out those traits in the artists, but Nickelodeon were 100% on board with how extreme things were going to get. Take Florian Bertmer's interpretation of "Svën Höek", with mad chihuahua Ren menacing his only friend and his Scandinavian cousin. Garza said, "When Florian's came in, I thought, 'I wonder if the studio is going to be in on this?' Ren looks super-super-crazy, and Stimpy and Svën look rightfully terrified of how he appears. So I was uncertain if Nickelodeon would go for that, but they've been great. They're really into what we do, and they understand what we do."

The Mondo/Nick melding also allowed for some really unique new takes on childhood favorites. Garza said, "A lot of it was just putting feelers out, and asking the artists 'Did you watch Nickelodeon at this time? What were some of your favorite shows?'"

Few blendings were more radical than master of mystery Francesco Francavilla taking on Nick's most globally successful and subversive animated character: Spongebob Squarepants. Garza said, "We knew we wanted to do the episode 'Graveyard Shift', and we thought Francesco would be a great fit, with his noir and horror aesthetic leanings, that he would do something really great for Spongebob."

Of course, Mondo's reputation is for beautiful art prints for your walls, but what would a Nick show be without slime? In an homage to You Can't Do That on Television (and Double Dare and Wild and Crazy Kids and the Kids Choice Awards – seriously, who didn't get a green goo coating?), Austin's Mad Science team will be holding a slime building workshop on Saturday morning.

Wait, you build slime? It isn't secreted by giant heads in hidden temples? Huh. Learn something new every day.

This new Mondo show brings back memories of the Nineties animated classic shows, including deep cuts like Aaahh!!! Real Monsters, plus some newer properties like Spongebob and Avatar. However, that doesn't mean that we'll never see a Good Burger poster. "I would love to go back and do some of the old classic stuff," Garza said. "In a perfect world, I would love to do a whole series of Are You Afraid of the Dark?"