Other Worlds Austin Review: Be My Cat: A Film for Anne 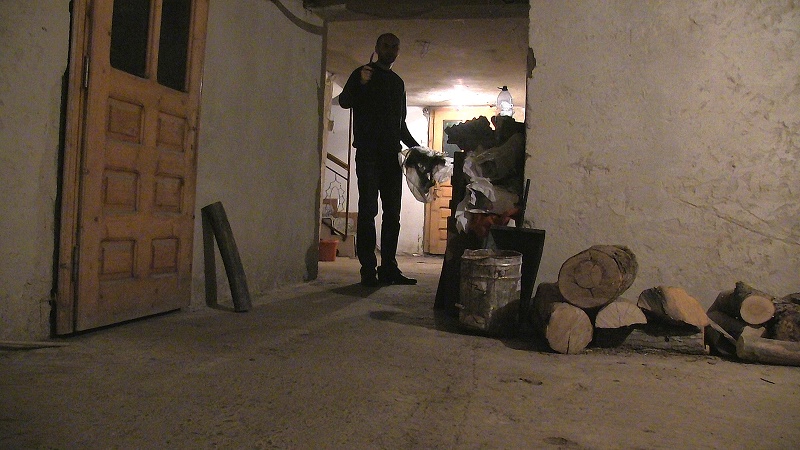 A tale of ordinary madness: Romanian psychological horror Be My Cat: A Film for Anne.

The democratization of the media has made everyone a journalist, or a musician, or a filmmaker. Think for a second about who that "everyone" includes.

Be My Cat (which screened as part of Other Worlds Austin's Under Worlds horror strand, and arrives on VOD from Artsploitation today) begins with a display of startling technical ineptitude. Adrian (writer/director/producer and star Adrian Tofei) is an aspirational filmmaker in a tiny Romanian village who dreams of making a film with Anne Hathaway. His idea is to make a proof-of-concept film to send to the The Dark Knight Rises star, which will convince her of his genius. However, he can barely hold a camera.

A serious warning: if you get motion sickness, take a Dramamine. This goes beyond shaky-cam and into the realm of wildly-swinging-cam.

That's the least of his issues. As an opening card explains, the footage was edited from material found at the Be My Cat crime scene. Adrian is clearly insane, and the three actresses that he auditioned to help him make his movie are trapped in a small flat with him, his crumbling grasp of reality, and blithe tendencies to violence, both physical and emotional.

It sounds like a paper-thin excuse for a found-footage slasher flick. What it becomes is a jaw-dropping character study of a murderer, made all the more grueling and transfixing because of Tofei's performance.

Adrian is as unlikely a killer as Norman Bates, but that's what makes him so terrifying. He seems innocuous and grating, but Tofei adds little tics that become signs (wait for that little sucking noise he makes with his mouth) of his unhinged nature. The nightmarish quality comes from the construction and subversion of tension, never better than in the closing sequence, with final girl Alexandra (Alexandra Stroe) attempting to reason her way out of the clutches of an unreasonable man. This is emotional extreme horror, but you won't be able to look away.

As a director, Tofei's greatest achievement is hiding deliberate decisions under the guise of accident – which is exactly what the best found footage should do. However, what he's really made is a study of obsession: Adrian's mad belief that he can make an A-lister his personal muse, the actresses' conviction that answering an email will make them famous. Most terrifying may well be that they accept his bullying ways as a natural consequence of art (an issue that seems more pointedly relevant in the wake of the recent allegations against Bernardo Bertolucci, and the Chicago Reader's revelations about former Profiles Theatre artistic director Darrell W. Cox).

His pointed decision to avoid overt gore, instead concentrating on the interactions, makes the film something akin to a modern Peeping Tom. However, unlike Michael Powell's visually arresting proto-slasher classic, there is nothing extraordinary in the presentation here. OWA founder Bears Fonté explained that he booked this because it evoked so perfectly those film submissions that every festival director receives that play like scarcely disguised therapy sessions. It's precisely because it feels so real that it feels so stomach-droppingly plausible: The mundanity makes it all the more terrifying.