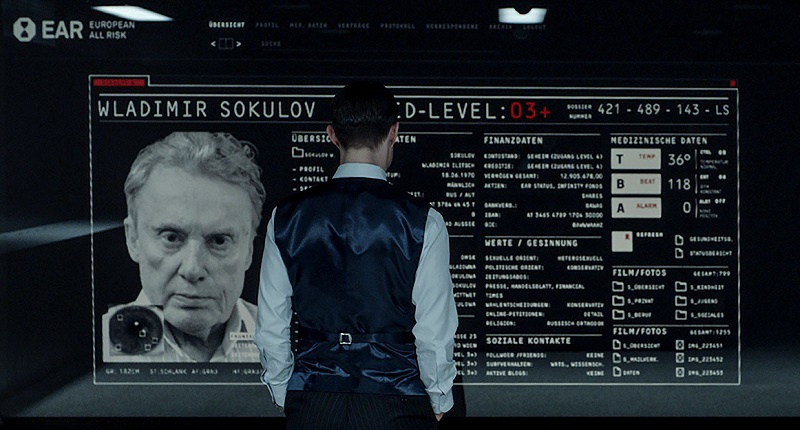 The old certitudes have always been death and taxes. In Austrian Stille Reserven (Hidden Reserves, which just received its North American premiere at Other Worlds Austin), even the inevitability of the grave has been ripped away.

The first image evokes a lo-fi The Matrix, with humans on life support being carted around by robots. Yet there's a drabness: These are no hi-tech cocoons, but rather they have the appearance of freeze-dried storage crates. As for the robots, they look to have rolled straight off a car production plant.

The ranks and ranks of stored bodies could explain why the city streets of Vienna seem so devoid of life as death insurance agent Vincent Baumann (Clemens Schick, Casino Royale, Point Break) drives to his office.

Wait, death insurance? Yes, death insurance. In this grimly sardonic near-future satire, life is tough, but dying is even harder. Croak with any outstanding debt, and your not-yet-dead cadaver is seized, packed, stacked, and put to some use: organ donation, surrogacy, even having your brain used as gooey data storage. The only way to ensure dignity in death (or any kind of death at all) is to be insured to ensure you'll be buried as you please.

Beneath the high-concept SF, writer/director Valentin Hitz has created a bleak and burning social satire: part Equilibrium, part Fahrenheit 451, part Glengarry Glen Ross. Schick deftly evades any implication of empathy in Baumann, instead portraying him as a merciless shark, preying on potential clients with a sales technique that verges on blackmail. It's only when his manipulative employers force him to start pursuing Lisa Sokulawa (Lena Lauzemis) that his career-fixated nature starts to crack. As the daughter of a wealthy and uninsured mark, Baumann sees her as leverage. She, an activist in the death underground, sees him as a way to break into the system.

Hitz skillfully crafts a dark and brilliant allegory of death, oppression, and modern economic servitude, defined by an untrusting romance between company man and rebel. The brightest sparks are in their elaborate dance, in the way she snarls "Teach me tiger, or I'll teach you" in a nightclub rendition of April Stevens' classic. Never before has a harmless and innuendo-drenched slice of Fifties pop carried such existential dread.