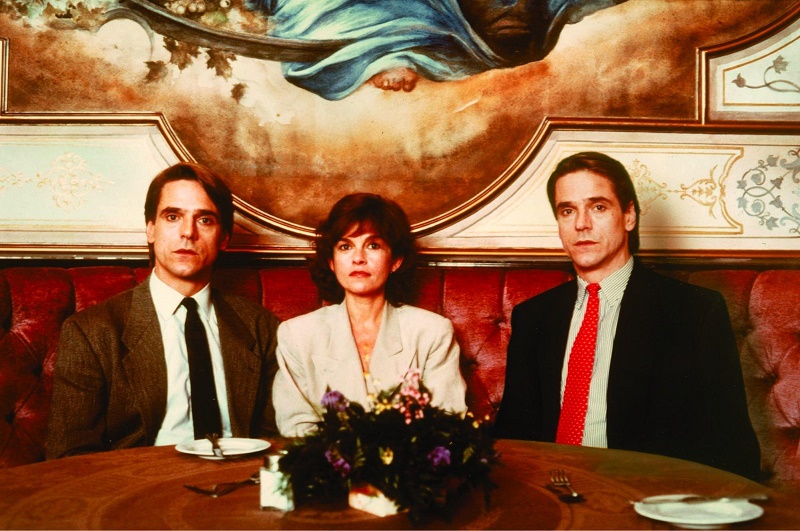 Cinema has two of the most perfectly chilling insights into the messianic complex of surgeons. First is Alec Baldwin's "I am God" speech in Malice. Second is Jeremy Irons in Dead Ringers, telling his brother of a failed procedure: "There's nothing the matter with the instrument. It's the body."

1988's Dead Ringers (out now from Scream Factory) was a point of astounding transition for David Cronenberg. His previous major works, beginning with Rabid and peaking with The Fly 10 years later, was avant-garde art dressed as mainstream horror. In 2005, he transformed again into a master of modern crime drama with A History of Violence. But this film was the first eruption of his dark mid-period, running through Naked Lunch, M. Butterfly, Crash, and culminating in 2002 with Spider.

Cronenberg was called the master of body horror, but in this era he became more openly cerebral, abandoning the gore, ichor, and pustulation of his earlier work in favor of implication and insanity. However, he doesn't abandon the themes that had driven him earlier – beginning with his overwhelming obsessions with the forms of the flesh.

The difference is that he does not feel driven to show them. Instead, he uses Irons as his proxy, or rather proxies. He plays Dr. Elliot Mantle, a gifted gynecologist. He also plays Dr. Beverly Mantle, Elliot's identical twin and professional partner. If that seems likely to lead to confusion, that's their purpose. Inseparable since birth, and fixated on reproduction (not sex), they share their practice, their research, even women. To the outside world, they are identical, but the differences are there. Elliot has taken to the revered celebrity status of the lauded surgeon and paper writer, while Beverly is the skilled clinician and bookworm data researcher.

The real differences are hidden subtly in Irons' masterful performance. It's an incredibly complicated challenge: Not only does he have to make them distinct, through ticks and tweaks, but he has to make them recognizable when they are imitating each other. Without that, their inevitable psychological merging and shattering would be meaningless.

Their stability is shattered by the arrival of actress Claire Niveau (Geneviève Bujold), who has a rare condition that becomes a point of fixation for Elliot. Yet for Beverly, it's the woman who becomes his obsession, the first part of their shared personal and professional life that he doesn't want to share. The balance is broken, each sibling's ability to emulate and complement the other pinwheeling apart.

Cronenberg does not ignore the fact that he makes the brothers gynecologists. The only woman who can readily tell them apart (Heidi von Palleske as their lover Cary, in a subtle role overshadowed by Bujold's fame) is the only woman never in stirrups or on the operating table. Woven into the siblings' identity crisis is the inherent creeping dread that you may not really know who it is that is touching you.

In the hands of a lesser filmmaker, this would be a simple Jekyl-and-Hyde-esque clash of good twin and bad twin. But Cronenberg rejects that, instead tackling a unique character piece. There are moments of gore: limited, subtle, and probably highly disappointing for anyone expecting The Fly II. But in adapting the novel Twins by Bari Wood and Jack Geasland (itself inspired by the true story of doomed identical twin surgeons Stewart and Cyril Marcus), Cronenberg and co-scripter Norman Snider push new boundaries of creeping dread.

It may have been a commercial failure at the time, but it set up the next two decades of Cronenberg's work: the transgressive sexuality of Crash, the drug delusions of Naked Lunch, the identity probing of eXistenz, the fluid sexuality of M. Butterfly.

It is also visually utterly unique. Shooting in his native Toronto, Cronenberg takes its chilly normality and injects extraordinary, off-putting components, like crimson surgical scrubs and bespoke instruments. However, he eschewed the OTT FX of The Fly in favor of implication, and letting the audience fill in the blanks through the dialogue. That may be accidental, since there were other, more graphic effects planned. However, a new interview with designer Gordon Smith (one of a plethora of special features included here) explains the near misses, and makes a strong case that the film is stronger with their absence.

Yet the greatest special effect may be the twinning effect developed by director of photography Peter Suschitzky. It's no surprise that he and Cronenberg have been inseparable on-set ever since. As he describes it in his own included interview, Cronenberg's spontaneity as a storyteller could drive a lot of DPs crazy. Yet their fusion completes what has become the Cronenberg creative equation ever since. While the Mantles fall apart, the new age of the filmmaker came together.

Dead Ringers (Scream! Factory) is available now on Blu-ray, as is a new edition of Rabid. Also out now: 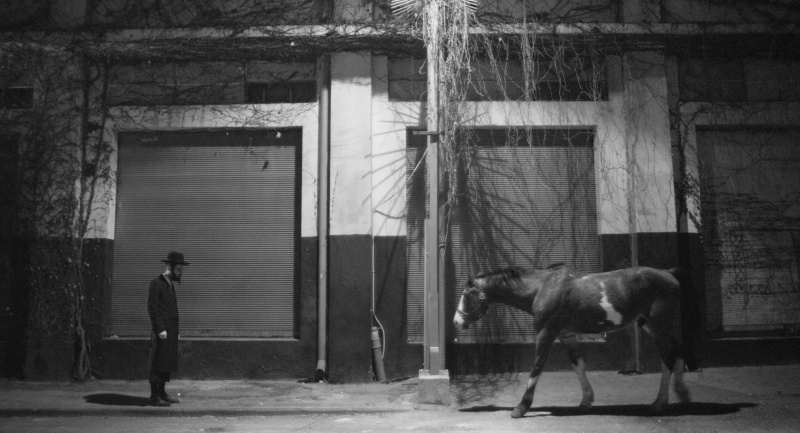 "Why the long face?" Jewish tradition explored with a dry humor in Tikkun.

Fantastic Fest 2015 selection Tikkun (Kino Lorber) begins with a boner. An unlikely start, undeniably, for a two-hour meditation on a young man's emotional distancing from his Orthodox Jewish roots. In fact, it doesn't really start there. It begins with a Schochet (Khalifa Natour) killing a cow in a kosher slaughter house. His sense of metaphysical ennui is palpable, and that's before he has to contend with his son Haim-Aaron (Aharon Traitel), whose fervent dedication to his studies at yeshiva seems to challenge even the observant patriarch.

But then that errant erection intrudes into their lives, leading obliquely to Haim-Aaron's death. His real problems begin when his father brings him back from the dead after an extended bout of over-enthusiastic CPR. The son seems less interested in the Torah than fumbling toward a more venal life, while the father is contending with the angry crocodile that Yahweh seemingly deposited in his toilet.

Tikkun is a Hebrew word meaning fixing or rectification, and that's a key concept at play here – most especially the idea of Tikkun Olam, fixing the world. Writer/director Avishai Sivan finds both silliness and tragedy in Haim-Aaron's faltering and stumbling attempts to find a new sense of direction. As his interest in the spiritual life slowly wanes, his father clings ever more so to his own faith: In doing so, the dynamic begins to lean oddly into the ambiguity of George A. Romero's subversive vampire classic Martin, where the role of the supernatural seems ever unclear.

There is a nightmarish quality, but then there is also the dry humor of Institute Benjamenta-era Quay Brothers (notably in the glacial black-and-white photography, and the way cinematographer Shai Goldman frames objects and body parts to render them nearly abstract). Moreover, Sivan subtly undercuts the idea that Haim-Aaron's changing tastes are due to some near-death experience: After all, that boner didn't appear all by itself. 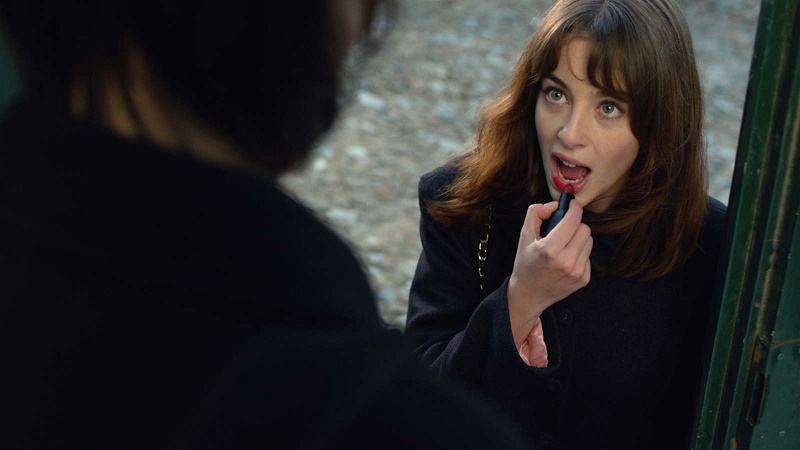 Few directors have so memorable a career as Andrzej Zulawski, and yet still be defined by one film. His 1981 body horror Possession was a radical distillation of the era's darkest obsessions: doomladen eroticism, nuclear apocalypse, existential angst. However, his career was really marked by adaptations: Dostoevsky for The Public Woman and Mad Love, Madame de la Fayette for Fidelity, and Mussorgsky for Boris Godunov.

Zulawski even abandoned cinema for 15 years to work on his own novels, but returned last year for what would become his swan song: Cosmos (Kino Lorber), an adaptation of Polish author Witold Gombrowicz's 1965 novel of a struggling writer stuck in a French boarding house, struggling to find meaning in a meaningless world.

In this adaptation, law student Witold (Jonathan Genet, looking like a stretched Adam Driver) decamps to the countryside to study before retaking an important exam, taking fashion industry underling Fuchs (Jonathan Genet) with him. However, he is really more interested in finishing his laughably pretentious novel. Staying at a French guest house, the pair become embroiled in the oddball family's dysfunctional dynamics. He becomes obsessed (for very different reasons) with the two young women in the house – daughter Lena (Victória Guerra) and cousin/maid Catherette (Clémentine Pons) – and most particularly with their mouths.

However, this oral fixation is interrupted by a series of small incidents: a hanged bird, arrows drawn on a wall, the way a rake is pointed, a spider on a lock. Witold thinks he is in the middle of some grand metaphysical mystery, but is he just ignoring the non sequiturs of existence?

The inevitable conclusion is that searching for meaning is a fool's task, and that the simplistic narrative flow and order that Witold attempts to inflict upon the world is an author's blind optimism. However, this is not dour nihilism: Much as Paolo Sorrentino achieved with Youth, Zulawski is the voice of accepting experience. He urges us to embrace the implacably erratic nature of life, even taking a loving bash at Gombrowicz's failure to truly finish a story or define his themes. There is a buoyancy and vivacity to his final work, obtuse and head-scratching as it may sometimes be.