Other Worlds and Under Worlds With Bears Fonté

Today may seem grim, but the future, well, at least sci-fi holds out some hope for a better tomorrow. As SF celebration Other Worlds Austin morphs into its latest incarnation, founder Bears Fonté said, "This is definitely our best festival yet."

There are some undoubted changes in this third year, starting with location. After two successful years at the Galaxy Highland, this third installment moves to the Flix Brewhouse in Round Rock. The fest has already had dry runs, scheduling screenings of films such as British retro space thriller Capsule, chilly character study Astraea, and meta-horror Director's Commentary: Terror of Frankenstein. Now the full four nights of programming, running Dec. 1-4, heads north. "I really think people are going to love being there," said Fonté. "It's been such a big change, having good quality projection, moving to DCP, and having food and drink, I think it's really going to change everything."

Second: retrospective screenings. With a proven track record on breaking new films, Fonté saw this as an essential component of the festival experience that it was time to add. This year, there are three archival screenings: Roger Corman's z-movie classic Battle Beyond the Stars, complete with Q&A from star Sybil Danning; John Carpenter and Dan O'Bannon's Dark Star, with Brian Narelle (aka the space-surfing Doolittle) in attendance; and a new score by Jay Woelfel for Island of Lost Souls, the 1932 adaptation of The Island of Dr. Moreau.

Fonté described the selection of this trio as evolving naturally. Dark Star came about while working with O'Bannon's widow Diane on the Dan O'Bannon Filmmaker Award, where he got to know Woelfel when the pair had films at the same festival, and they bonded in adversity. He said, "There was no one from the festival at the site, so we broke into the projection booth and ran our films on Blu-ray." Fonté described this new project as "really cool," and an opportunity to see one of Charles Laughton's greatest performances. "It makes me wish that 1996's Island of Dr. Moreau had Charles Laughton in it, rather than Marlon Brando." 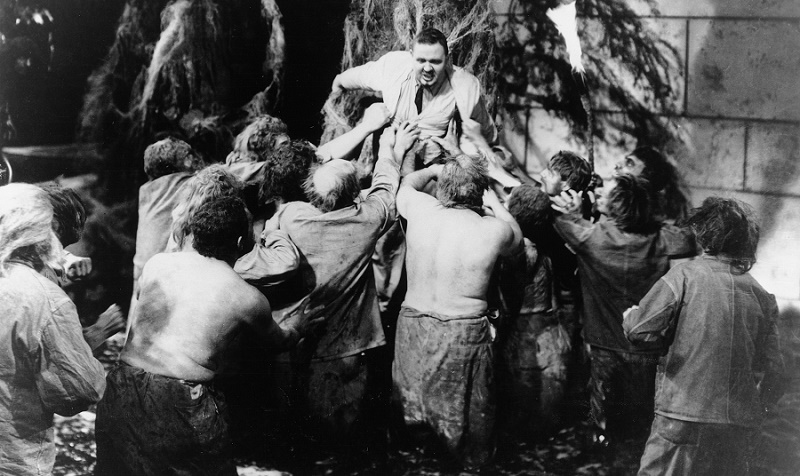 Charles Laughton in Island of Lost Souls, showing with a new score at Other Worlds Austin

As for Thursday's opening night gala screening of Battle Beyond the Stars, well, what's the point of founding a festival if you don't get to show one of your childhood favorites? Fonté said, "I've never seen it on the big screen, but it was on the video store shelf every week, and I always wanted to rent it. This is just me fanboying out, and then being able to get Sybil Danning to come in is super cool."

Third: the addition of a horror strand, Under Worlds Austin. In part, this was inspired by another local genre film festival, Housecore Horror, and Fonté has given credit to late HH founder Corey Mitchell for encouraging him to start OWA. There had been talk in earlier years of heading into the darkness, but with Housecore on hiatus, adding this horror component seemed timely. Moreover, just as OWA pushes the boundaries of sci-fi, Fonté selected titles for UWA that were more than gore or jump scares. "In the same way that science fiction is an investigation into a question, so are the horror films that we are picking." What he wanted was "horror that, you watch the film, it scares you, and then three hours later it still scares you, because you're still thinking about it."

The epitome of that is paranormal investigation chiller We Go On. Fonté said, "There are moments in it that are scary, but it's more about how does life deal with the afterlife. If we find there really is an afterlife, how does that change how we view the world, and do we really want to know these things?"

You watch the film, it scares you, and then three hours later it still scares you, because you are still thinking about it. – Bears Fonté, Other Worlds Austin founder

Most of the UWA titles have a supernatural or SF component, but there is one that cleaves closer to the slasher end of the genre: Romanian POV shocker Be My Cat: A Film for Anne. Fonté said, "Found footage is one of those categories of films that people just hate, and it was the first one I've seen in a long time that really took advantage of why the camera is on, and why he would be filming everything. And the guy is just so charming, and so completely logical in everything he is doing, but it's the logic of a crazy person."

Of course, there is always still the main programming that has defined the festival to date. This year, there is an emphasis on international SF, with one of the first ever sci-fi films from Israel (OMG I'm a Robot?!), quite possibly the first film ever from Martinique (Battledream Chronicle), plus the remarkable Swedish UFO-hunter documentary Ghost Rockets. Fonté saw it last month when his own film, "Roadside Assistance," played the Lund International Fantastic Film Festival, and knew he had to host its Texas premiere. "The thing I love about it," said Fonté, "is it's so damn Scandinavian. Never once do you think, 'Oh, I bet they're going to find the ghost rocket.' You know from the beginning that this is their whole life that they have dedicated to this pursuit, and they're going to fail, and they're going to keep trying. Their hobby is to fail, and that seems so Nordic to me."