Austin horror goes beyond the slasher 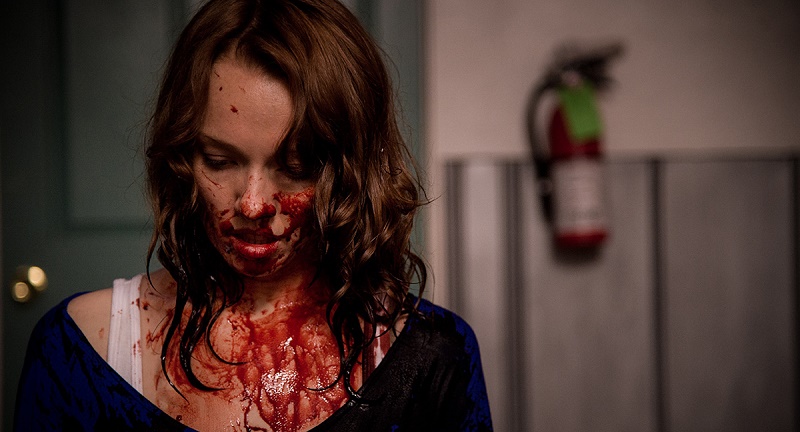 Like any good Austin horror, Last Girl Standing makes a subtle nod to The Texas Chain Saw Massacre. But that's far from the only influence, or the most unexpected. Producer Rachel Moody said, "We wanted to make a Short Term 12 version of a slasher movie."

Last Girl Standing starts where many movies end: with the last girl stopping the mass murderer that has hacked and slashed through all her friends. But then what? Five years later, Camryn (Akasha Villalobos) is still haunted by nightmares of the Hunter, the maniac she dispatched after a bloody campsite slaying. Yet the events of that night leave their marks, as she's scarcely capable of holding down her minimum-wage job at a dry cleaner, and friendships seem an invitation to disaster. And can she really be so sure that the Hunter is really dead and buried?

The Austin-made, Kickstarter-funded shocker is very much a family affair, with Rachel Moody producing, and her husband Benhamin R. Moody writing and directing. It's the debut feature for the pair after a series of shorts and web series under the Blue Goggles Films shingle. Their last two shows, BIT Parts and De-Pixelated, are gaming comedies, but this is both their homage to classic slasher flicks, and a way to prick the inherent unreality of the genre. Ben Moody said, "I love gore, but Rachel cut her finger once and was bleeding, I almost passed out." However, that shaped his approach to horror in Last Girl Standing. "Once the opening of the movie is done, we're in real life. I wanted it to be gruesome, and not celebratory gore."

Austin Chronicle: Last Girl Standing is what happens after the final reel of a slasher movie. What was the genesis of that?

Rachel Moody: We were stuck at home, we had just had a baby, and it was the middle of October, so we were watching horror movies at home with the newborn. One night, Ben turns the TV on, and we happened to catch the end of a slasher movie, just the very end where she kills the bad guy, and is carried away in a police car, cackling. Ben turns to me and says, "I want to see what happens now." Despite having seen that movie before, when you watch it from that moment, it is affecting. She's just seen all her friends slaughtered, what's going to happen now?

Benjamin R. Moody: It felt like I pitched you an entire movie in that first 45 minutes of talking, and it felt like lightning in a bottle. We'd been trying to get a first feature off the ground, and looking at bigger projects, and we latched on to this one because we thought we could do it with our resources.

RM: It also felt natural because we both love slasher movies. Yes, some movies have dealt with the final girl after, but we felt like no one's done it in modern times in an indie movie kind of way. 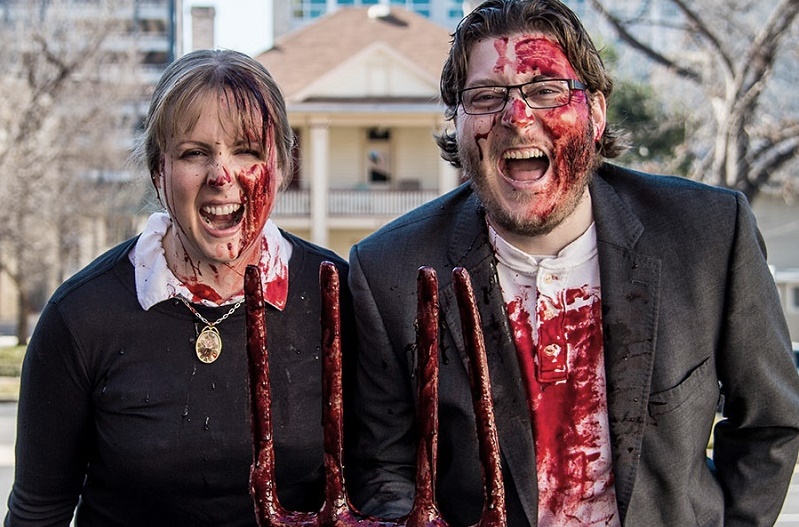 The family that slays together: Rachel and Ben Moody, the husband and wife team behind Last Girl Standing.

AC: Austin is very much part of the film, with a commentary about minimum wage jobs, gentrification, and the art community. There are some recognizable parts of Austin in here, like the bus stop at 45th and Guadalupe.

BM: I picked that bus stop because it was always overgrown with grass, and I was like, "Ooh, I like that the grass is always taking over the concrete." The day before we started filming, they mowed it.

But Austin, what I like about the town is there's a lot of old mashing with new, and that's a theme of the movie, with repetitions and cycles. In the movie, they talk about gentrification of areas, and even in my short life, I've seen it cycle through where the inner cities were where rich people wanted to live, and then they moved to the suburbs, and poor people moved to the inner cities, and now the reverse is happening.

Where we shot on East Sixth Street, I don't know if I would shoot there now. We shot in Shangri-La, and when we were in the pool room, there's big windows there now and we couldn't have blocked the light with our minimal means. There's all these condos there now, and I was worrying, is it losing its flavor in just two years?

AC: The opening sequence is a classic slasher denouement, with some nods to some really deep cuts of the genre.

BM: The design process of that sequence, I wanted it to be something where everyone would find it familiar, where any horror fan can find something. You can say The Final Terror, I can say Friday the 13th Part VI, and The Texas Chain Saw Massacre, obviously. I wanted it to touch on those tropes enough that everyone would find something in it. I wanted to re-create the experience of turning on the TV and catching the end of a movie, like we did, and instantly knowing what genre it was.

AC: Austin's got a growing FX community, so who did you use for the gore?

BM: Jason Vines plays the Hunter and designs the Hunter and made the Hunter. The gore was mainly Edwin Wise. He got his start doing those Scare for a Cure haunted houses, and he's been slowly branching into the film world.

AC: That's true for a lot of the local FX people, that they start in Halloween haunts and then float over to movies because it's less seasonal.

BM: The haunts are only once a year, film stuff has a little more work. Edwin was a friend of someone else that started working on our shorts. I call him the mad scientist. I love going to his house, because it feels like you're in a mad scientist's lab.

RM: He's getting known as the blood guy in Austin. His blood is the most realistic in Austin, and he was super-excited when we said we wanted to make a feature. He had done quite a number of shorts with us, so when we reached out he was definitely onboard. And he's growing too. He saw it as a chance to get in there, work on a movie, do something he hadn't done yet, which was true of everybody we were working with. They all came from our shorts, but not many had done features.

BM: That was how we got away with making the movie. It was all of us having the opportunities to have those lead roles.