DVDanger: What to Watch This Halloween

Halloween is upon us. and even if the Austin weather refuses to concede that it should be fall, at least there's the warming glow of the TV to summon the spirits. If you're still looking for a few last minute recommendations – from exploitation sleaze to shrieks of laughter – here's some recent releases sneaking up on you. 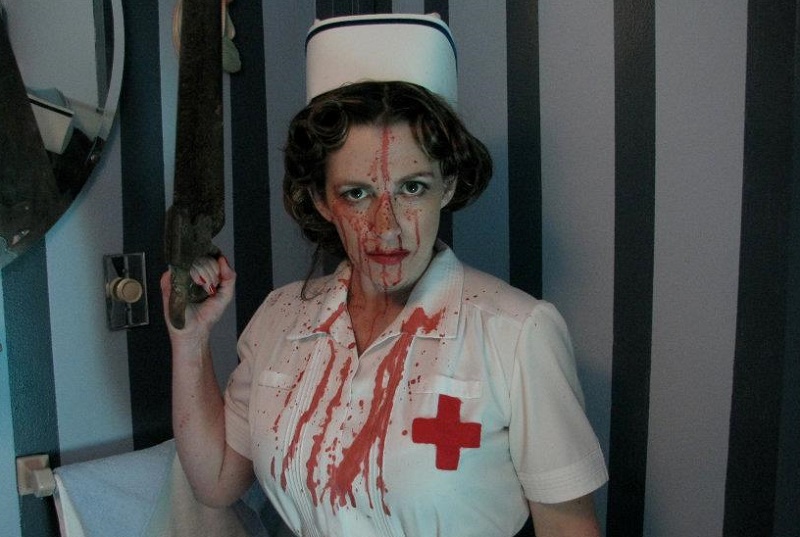 Murder most horrid in Tales of Poe, out just in time for Halloween (Image courtesy of Wile Eye/Midnight)

If you're looking for a new take on some classics … try Tales of Poe, a selection of the Gothic master's most famous stories revamped with female protagonists.

Opening chapter "The Tell-Tale Heart" is translated to a stereotypical insane asylum (of the kind rarely seen outside of horror films), with the narrator (neo-scream queen Debbie Rochon) recounting her experiences as a nurse to a Norma Desmond-esque lock-in (queer horror icon Alan Rowe Kelly). Writer/director Bart Mastronardi (Vindication) embraces the Hollywood camp alongside some gruesomely overblown gore, but most importantly remembers that the narrator was deranged before, and after, the murder.

Rowe returns as star, writer, and director of "The Cask," a heavy revision of "The Cask of Amontillado." Instead of an unclear feud between oenophiles, he subjects his wine collector (Randy Jones – yes, the cowboy from Village People) to a sinister love triangle. It's a sensible revision, not least because the original short story and "The Tell-Tale Heart" have undoubted thematic resonances. So while Mastronardi is more visually hyperbolic, Rowe straddles the line between Poe's purple prose and soap opera histrionics. Rowe deftly adds a queer tension to the relationships, using gender fluidity to leave intriguing blanks in key relationships.

The third installment is the most enigmatic. Rather than adapt a classic Poe tale, "Dreams" takes his 1845 poem of the same name and creates a dialogue-free phantasmagoria. Poe's brevity has always given filmmakers space to elaborate (the fact that The Pit and the Pendulum is only 20 pages long never discouraged a plethora of adapters over the last century). However, Mastronardi completely rewrites Poe's ode to the joys of slumber as he sends the unnamed dreamer (Bette Cassatt) on a Lewis Carroll via Buñuel mystery ride. It's experimental, if not always successful, but definitely gets some candy in the bag for the year's most satanic tap dance sequence. It's also the only one of the three that truly catches Poe's unconquerable romanticism.

Of course, this collection is always going to live in the shadow of arguably the definitive Poe adaptations/cinematic manglings, the Vincent Price/Roger Corman catalog (available in three omnibus collections from Shout! Factory). But the feminist/queer refiltering of the stories gives it an intriguing spin. 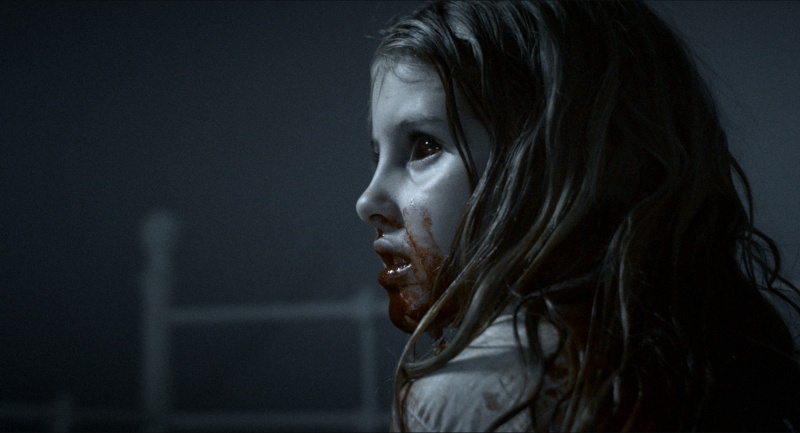 If you're looking for foreign flavor … for his debut feature What We Become (Sorgenfri, IFC Midnight), Danish writer/director Bo Mikkelsen takes the classic home invasion aspect of the zombie thriller and refracts it through a Nordic lens.

In many ways the genre has never really moved away from its American roots, and that often defines the tropes. It's the international commentary that puts it into the clearest context (for example, the gun-free, pub-centric, very British subtext of Shaun of the Dead may be the ultimate commentary on the guns 'n' compounds fallbacks of the post-The Walking Dead revenant Americana.

For this Fantastic Fest 2015 title, Mikkelsen moves the flesh-craving apocalypse into suburbia, with the passive protagonists thinking they can take shelter behind their privet hedges as an invisible plague strikes their neighbors down. Pernille (Mille Dinesen) and Dino (Troels Lyby) think this is just another passing news story they can keep at arm's length on their widescreen TV, while daughter Maj (Ella Solgaard) cares for her bunny, and son Gustav (Benjamin Engell) starts his first flirtations with new neighbor Sonja (Marie Hammer Boda). Even as armed patrols sweep the neighborhood, and houses are sealed in black plastic shrouds, they're still content to watch home movies, and wait for food deliveries.

Mikkelsen isn’t hell-bent on reinventing the genre. However, that’s the point. If the infection had flared up in Oklahoma, it would be a very different experience, and he’s using the same concept to examine how his home nation would respond. Just as George Romero eviscerated American consumer culture in Dawn of the Dead, Mikkelsen takes a shambling aim at slow-motion passivity, with the fake rugged outdoorsmen of the neighborhood turning into hunter/gatherers just that little bit too late. The end is as bleakly optimistic as the best of the genre, and the location alone adds new perspectives.

Half Shaun, half Lucy: Fall in love with Night of the Living Deb. (Image courtesy of MPI)

If you're looking for laughs … then jump right into Night of the Living Deb, a blissfully goofy zom-rom-com that debuted locally at Other Worlds Austin 2015. You can read my full review here, but here's a little of what I wrote about this "giddy, hilarious riff on the zombie romantic comedy."

The ace up its rotting sleeve is the sparky, zesty energy between its leads. Deb (Maria Thayer) is a goofy camera operator for a TV station, down on her romantic luck, when she falls/is pushed in the direction of Ryan (Michael Cassidy). The next morning, he's shoving her out the door hard, but her walk of shame is interrupted by the slight inconvenience of the zombie apocalypse.

Tipping its hat clearly to It Happened One Night, Deb's tale of a couple finding unlikely love under the worst possible circumstances is a breathless, giggly affair. Thayer has the goofy grace of a young Lucille Ball, her awkward attempts to both seduce and be aloof around Ryan a delicious mix of pratfalls and witty banter. As for Ryan, his charming exasperation at her obliviousness is the perfectly toned counterbalance.

Basically, imagine 30 Rock's Liz Lemon hitting on Parks and Recreation's Ben Wyatt. And honestly, it's that level of chemistry. Thayer and Cassidy are a perfect pairing. 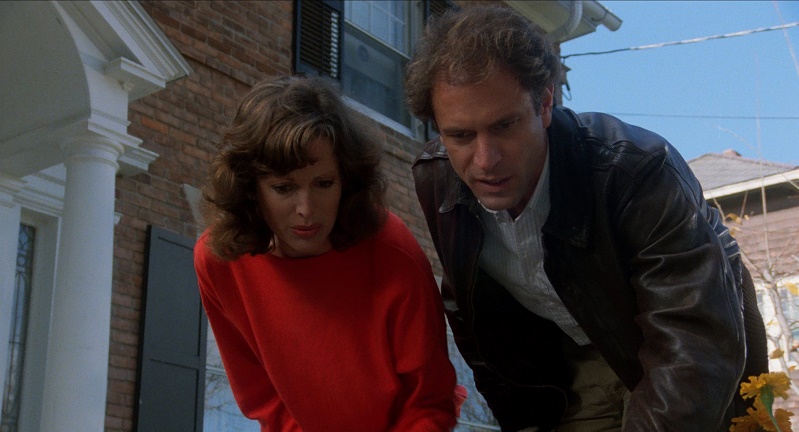 If you're looking for a truly creepy-crawly creature feature … then resurrected VHS slimer Slugs (Arrow) may be one of the most bonkers. That the producers could get the Royal Philharmonic Orchestra to perform Tim Souster's score for an adaptation of Shaun Hutson's Z-grade horror novel proves that money can open any door.

This American-Spanish co-production (explaining its wonderful subtitle, Muerte Viscosa) translates a tale of British bureaucrats against flesh-eating shell-less molluscs to fictional New York State nowheresville Ashton ("armpit of America and center of boredom for the entire Earth," as one drunken housewife explains). Typical of the post-Jaws format of mutated beasts attacking an unsuspecting populace, there's only one person who really knows what's going on. However, if you think that Chief Brody had a tough time convincing the mayor there was a Great White shark, imagine the trouble health inspector Mike Brady (TV bit-part player Michael Garfield) has convincing Sheriff Reese (John Battaglia) that there are hordes of evil black slugs coming up through the sewers and stripping residents to the bone.

By 1988, the mini-monster invasion had pretty much burned out, as exploitation directors could only rip off Piranha for so long. However, Slugs (both the book and film) skews closer to the great precursor of the genre, 1976's worm-food extravaganza Squirm. If it looks like the cast aren't acting in the same room as each other, that's true, because the shoot bounced between Madrid and New York (the intercontinental cast also explains why their faces are rarely in the same room as their over-dubbed voices). It’s disjointed, gruesome, sleazy: in other words, a perfect slice of lesser-known unreconstructed Eighties VHS horror.

As always with Arrow Films, there's as much joy to be found in the loaded extras and interviews. There are wonderful anecdotes like Actor Emilio Linder fulfilling a double dream of meeting Italian screen siren Silvana Mangano and having his head explode with parasites, all in the same day. Or switch over to Hutson’s commentary track, in which he pleasantly explains exactly why the story worked so much better on the page than onscreen. Plus, this was pretty much the most exciting thing to ever happen in Lyons, N.Y. If you don't smile when production supervisor Larry Ann Evans wanders through the Slugs exhibit in the Museum of Wayne County History, then you deserve no candy in your Halloween sack.

Tales of Poe (Wild Eye) is available on DVD and VOD now.

What We Become (IFC Midnight) is available on Blu-ray/DVD combo now.