DVDanger: She Who Must Burn 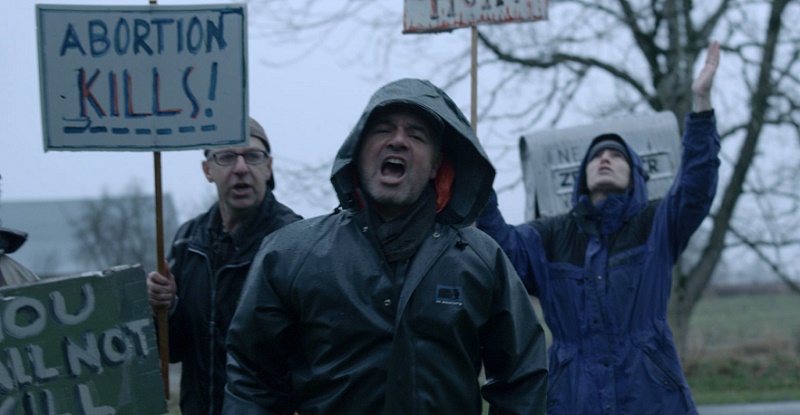 It begins with a murder: a doctor shot in the face by a religious zealot. It ends with a massacre. And in between, indie horror She Who Must Burn is a chilling indictment of the fanaticism of the modern evangelical anti-abortion movement.

In a Midwestern nowhere, Angela (Sarah Smyth) finds herself jobless after fundamentalist maniac Abraham Baarker (James Wilson) slays the doctor she worked for, convinced that he was carrying out abortions. Her commitment to the families she helps remains, so she continues counseling them out of her home, much to the ire of the patriarch's son Jeremiah (Shane Twerdun, Black Mountain Side), who sees his task as continuing his father's abortionist-slaying ways. Like all paranoiacs, he sees what he hates and fears everywhere, and so sets his sights and his congregation after Angela.

Many pregnancies in horrors deal with maternity issues, from It's Alive to Antibirth, and are positively screaming for a termination. Yet it's rare for a genre film to tackle abortion politics as head-on as this.

The script by director and seminal Canadian provocateur Larry Kent (The Bitter Ash, The Hamster Cage) and Twerdun is an unrelenting insight into what the anti-abortion, anti-science, anti-public health care religious right can become. It's when Jeremiah looks on with cold disinterest as yet another of his flock suffers a stillbirth, and he writes it all off as the will of the Lord. It's when he's not even willing to help the mother with the burial as she hand-scrapes the soil into the grave.

It's not subtle – Kent's take is often bleak, sometimes grisly – but then this is an issue of gut-punch importance, dissecting the pervasive and frightening influence of radical religiosity on America's health and criminal policies. This is a lo-fi indictment of the brutality of spousal rape, and anti-abortion activists who believe they have a divine right to murder.

The story becomes more directly political when the evangelical melds with the parallel plotlines about environmental crimes perpetrated by the area's sole big employer, the local mine whose dust and residue pollutes the water and the air.

However, Kent and Twerdun build in nuance through unexpected character twists, like male members of the congregation more worried about their wives' health than devotion to Baarker's mania, and Angela's husband Mac (Andrew Moxham) never being less than supportive of her dedication to her clients and patients. Meanwhile, it's Abraham's daughter-in-law Rebecca (Missy Cross) who is as dangerously devoted as Jeremiah, a harsh reminder that some of the most fervent anti-abortion activists are women.

This is the religious right rewritten by way of The Wicker Man, the reproductive rights fight as the new Salem witch trials, with broad strokes of Michael Haneke, Jim Thompson and Clive Barker adding that necessary bleakness. It overcomes its low-budget restrictions (sadly, no major studio would touch a script so timely and bold) with compassion and righteous fury, never flinching from the final horror.

She Who Must Burn (Midnight Releasing) is available on DVD and VOD now.

Midnight Releasing, DVD Watch, DVDanger, She Who Must Burn