From Rosemary's Baby to The Sacrament, filmmakers have been obsessed with the twisted vision of cults. Austin Film Festival Dark Matters Features competition jury award winner The Cliff (aka Acantilado) continues the tradition with a distinctly Iberian twist. 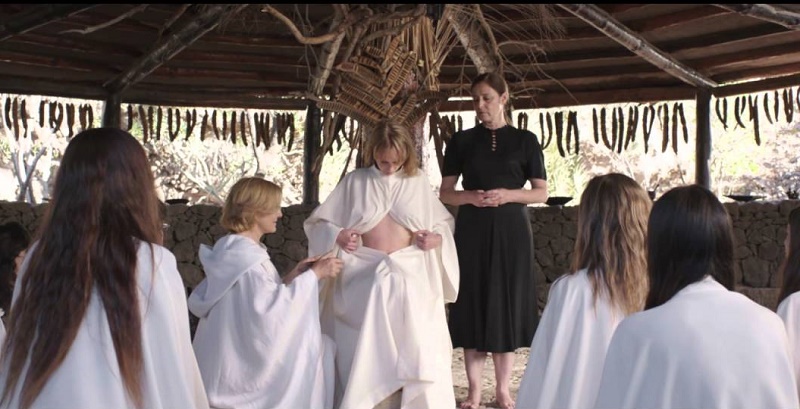 Bilbao DA Gabriel Larrea (Daniel Grao) hasn't had much contact with his sister Cordelia since she joined a bizarre group called the Community. After a phone call, he's in a morgue in Gran Canaria with Cordelia's roommate Helena (Juana Acosta), looking at dead bodies after a mass suicide. As the pair are quizzed by Inspector Santana (Goya Toledo, Amores Peros) about his sister and her involvement with this sinister sect, he quickly realizes that he didn't know her anywhere near as well as he thought, and his investigating attorney instincts kick in.

Adapting Lucia Etxebarria's 2012 novel El Contenido del Silencio, director/co-writer Helena Taberna's approach is far more True Detective than The Sacrament. She runs four parallel and intersecting narratives: Gabriel, quietly flailing through his own grief; Helena, revisiting her own relationship with Cordelia and questioning whether she could have helped; Santana, who carries her own culpability; and flashbacks to life on the farm, capturing Cordelia's fall into the waiting arms of the cultists.

If there's a glitch, it's in the awkward relationship between Gabriel and Helena, made plausible only by Gabriel's extreme credulity. Fortunately, the bulk of the storytelling falls upon Toledo, as the personal tragedy becomes much more a dark, procedural thriller.

Javier Agirre's calm, often chilly cinematography establishes a sense of impending doom from the opening of the white-clad cultists fluttering to their death, a tone complimented by Pablo Bueno's windswept sound mix and Mikel F. Krutzaga's rumbling, unnerving score. However, it is the investigation that injects the darkest subtext, particularly as it starts to rip apart the Spanish proclivity for hiding dark political secrets. For example, the selection of Gran Canaria isn't just for the pretty beaches.

So while the interpersonal drama may sometimes feel forced, Taberna excels in creating a twisting politically tinged thriller.