Ann Arbor proto-punk godheads Iggy Pop and the Stooges remain as iconic today as they ever were, and this Jim Jarmusch documentary is a loving, loud, and thoroughly entertaining tribute to the band and their dirty, gutter-glam influence. 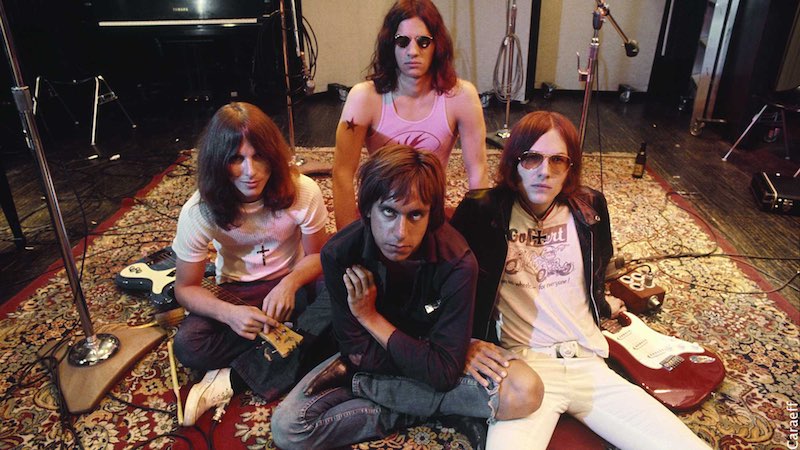 I should probably note right off the bat that my wedding march was the Stooges slatheringly romantic love-dirge “I Wanna Be Your Dog,” so you know where I stand on the subject, but Gimme Danger stands plenty well on its own, or rather, like Mr. Pop (né Osterberg), writhes, contorts, and funhouse mirrors the history of the times that birthed the band in all its collapsing American glory. Jarmusch’s ode to anarchic joy is first and foremost most important for putting the band in historical context. Like their “big brother band,” Detroit’s politically revolutionary MC5, the Stooges were birthed from the eroding American dream with the truncheon crunch of the ’68 Democratic National Convention as an everlasting undertone. While the 5 went deep down with their support of the Black Panthers and eventually paid the price for it, the Stooges were always seemingly too feral for such trivialities as engaging in the incendiary partisan politics of the time. They just wanted to rock, and so they did. The rest is history, but really cool history, if you know what I mean. They kicked out the jams and then some.

Osterberg has popped up in Jarmusch’s oeuvre before, with fellow fringe traveler Tom Waits in the “Somewhere in California” segment of the director’s underappreciated Coffee and Cigarettes shorts anthology, but here he declares, straight off the introductory bat, that the Stooges were “the greatest rock & roll band ever.” (Clash fans may quibble.) From there, he intercuts a lengthy, often hilariously droll “interrogation” of his subject, lounging in what looks like a golden throne, with a series of blackout segments that document the various phases of the band. Pop, still as wiry and tan as a desiccated desert rat all these years later, recalls his early love for the Chicago blues and the formative meetings between himself – originally a drummer – with future sibling bandmates Ron (guitar) and Scott Asheton (proper madcap drumming), bassist Dave Alexander, and later second guitarist James Williamson. Signed to Elektra by Danny Fields (himself the subject of the recent doc Danny Says), their first self-titled album, Fun House, was produced by the Velvet Underground’s John Cale.

Jarmusch deftly tells the tale of the wild child and his band itself – much of which has been documented before – but manages to dig up some new dirt, too. He also uses a barrage of canny clips from Sixties-era television (The Addams Family) and movies (John Wayne) to leaven what might otherwise be an often overly dire, drug-addled story. One particularly fine moment has Iggy calling Moe Howard of the Three Stooges on the phone to ask permission to use the Stooges name. By the end of this tight and timely documentary – once again we’re a nation in chaos, breeding some ridiculously fine rock & roll while the world burns – both fans and newcomers to the Stooges will leave with the hairs on their inner ears singed (thanks partly to the film’s particularly forceful sound design) and a song in their heart, even if that song is “Your Pretty Face Is Going to Hell.”