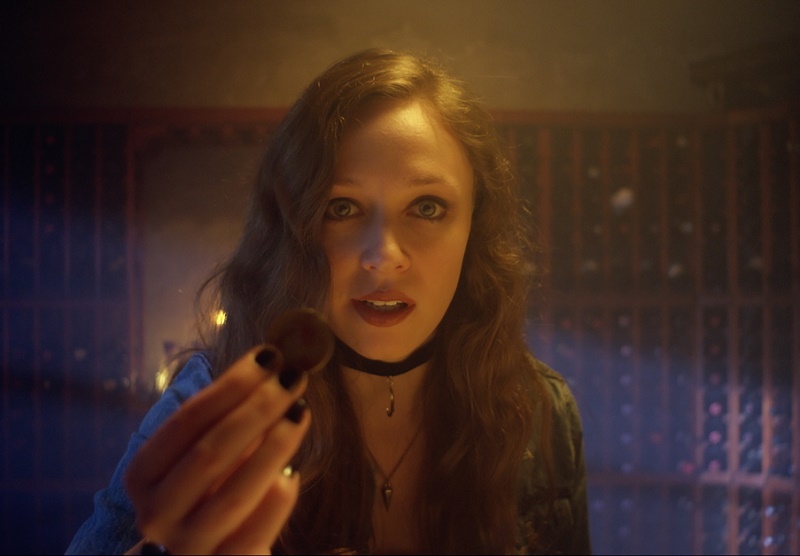 Bad kids doing bad things in "GiverTaker," the first short in a series from the Dead Kids Club. (Image courtesy of Arcanum Pictures)

Are you a member of the Dead Kids Club? Watch new short "Givertaker" by Austin director Paul Gandersman, and you could be signed up. He said, "I want people to feel like a kid watching it at 2 in the morning on HBO, bouncing in their seat, going 'This is fun!'"

Gamers probably recognize Gandersman from his work as senior editor at pro-gaming news site FlokoTV, just as film fans will know his collaborator and "Givertaker" writer Peter S. Hall from his day job as senior editor at Movies.com. But together they are Arcanum Pictures, and co-creators of the first in what they plan to be a series of shorts and features that will make up the Dead Kids Club.

The short, which debuted at Fantastic Fest and launches on Vimeo today, goes down into the basement with an angry outcast, looking for supernatural revenge on the cool kids that bully her. Yet, as always, any deal with the devil is going to have its cost.

So what is the Dead Kids Club? The aim was to re-create the classic era of Eighties teen horror, Hall said, "Particularly stories that have the teens committing willful acts of transgression, and having the punishment come back to them. As opposed to other horror movies that have teenagers and go, 'Oh, we're going to slaughter you because you're young.'"

"The key word was fun," said Gandersman. "The stuff Peter and I grew up with, like Scream and Are You Afraid of the Dark and Tales From Crypt, I don't know if they were truly scary, but they were a hell of a lot of fun to watch."

It's not like the duo are completely new to filmmaking. Together, they had produced two films by Emily Hagins (Grow Up, Tony Phillips and My Sucky Teen Romance), but after she moved to Los Angeles "we found ourselves at a bit of a crossroads," said Gandersman. "Do we find another director to produce for? Do we want to keep producing in that fashion? What we really wanted was to be a writer/director team."

However, Gandersman said they didn't want to do what a lot of first-time filmmakers do. "They grab a cheap camera and five people and do something on the weekend for $1.50. I have a lot of respect for that, but our brains don't work like that. if we're going to do something, we're going to put a lot of time and energy and effort and whatever money we have into it, and have it look like, if we were making a feature at a million dollars, one shot from this would look exactly the same as one shot from that feature."

Their original idea was to create several shorts, written by Hall and directed by Gandersman, setting the stage for a full-blown Dead Kids Club feature. However, "Givertaker" wasn't the first project off Hall's script list, but another story called Boyfriend Forever. Gandersman said, "We spent six months developing that, working on the tone and the style."

However, after all that effort they decided that it wasn't the right story to start signups for the Dead Kids Club. While they still definitely want to shoot it, Hall said, "It was more comedic than it was horror, so it wasn't really going to serve as a proof of competence that we can make a horror."

If the idea was to get traction for the series, "Givertaker," the pair found themselves with a major production problem. The short's sole location is a basement, said Hall, "And we could not find one."

Basements, particularly old, creepy basements, are basically non-existent in Austin. Local author-turned-director Owen Egerton had found one for his debut feature Follow, and the duo wanted to use that, but found the house had been demolished just days after Egerton finished filming. After that, the only cellar that the pair knew about belonged to Alamo Drafthouse founders Tim and Karrie League. Hall said, "We didn't want to impose on them, but eventually we ran out of options, so we called Tim and went, 'Hey, can we check out your basement?'"

Now here's your chance to see down into the realm of the Givertaker:

For more on "Givertaker" and the Dead Kids Club, visit www.arcanumpictures.com.