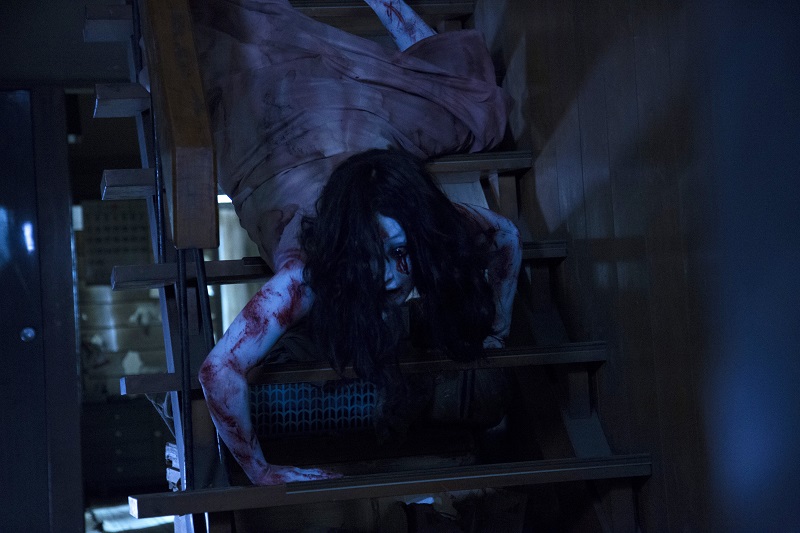 You got your grudge in my ring: Sadako vs. Kayako is a surprisingly effective melding of two J-horror mainstays.

The horror crossover is a dangerous beast. From the lousy House of Frankenstein to the unwatchable Freddy vs. Jason, they're usually a monstrous hybrid that consumes its creator. Not so with Sadako vs. Kayako, finally mashing together Ring and The Grudge.

For J-horror fans, this is the biggest fantasy booking coup since Godzilla vs. Mothra (and arguably more of a challenge, since the Ju-on and Ringu franchises were released in Japan by different studios). After all, in 1998 when the first Ring was released, U.S. mainstream horror was moribund, recovering from the wave of arch teen slashers that had wrecked the Nineties. Japan was producing horror that was truly horrifying: creepy, beautiful, shocking, unnerving. Absolute nightmare fodder.

18 years later, Sadako – Ring's goblin-touched protagonist – has lost none of her power to terrify, and neither has Kayako, the misshapen murder victim constantly out for revenge. Here, they are initially thought to be nothing more than urban myths. Well, until the infamous cursed tape turns up again, and someone new moves in next to the death house. For the first time ever, the duo seem set on a slow, meandering, and ultimately horrifying clash.

While director Kōji Shiraishi is most notorious for the stomach-churning Grotesque, he has dabbled with spooky narratives before, most notably 2005's The Curse. While he cuts back on the visual flair that made the originals so noteworthy (with none of Ju-on's distorted editing, or Ring's more esoteric imagery), he keeps the pivotal beats. Sadako's hair, Kayako's click-click-click, the fact that they kill by fear. While it would be impossible for him to recapture the shock of the new from first seeing either, he undoubtedly creates a spine-tingling resurrection.

He's working from a script co-penned with Ju-on creator Takashi Shimizu, making it all the more curious that neither seems very interested in making a Ju-on film. Kayako barely appears, and her subplot merely weaves in and out of the return of Sadako. Then again, after eight Japanese films in the franchise and a separate U.S. trilogy, maybe he was tired of writing about the death house, because Shimizu clearly seems more excited by author Koji Suzuki's greatest creation in Sadako.

They also evolve the franchise smartly. Ring, with its emphasis on VHS recordings and people actually picking up their phones, was perfectly of its time, and the duo manage to update that conceit – even finding a good reason why a couple of school girls would be playing anything on tape.

If there are any complaints to be had, it may be from the injection of some unexpected humor (Masanobu Ando as a sardonic exorcist), and some peculiar CG insertions. So while Sadako vs. Kayako may leave the gritty, experimental roots of both franchises behind, they conjure up hopes of a new wave of possession.