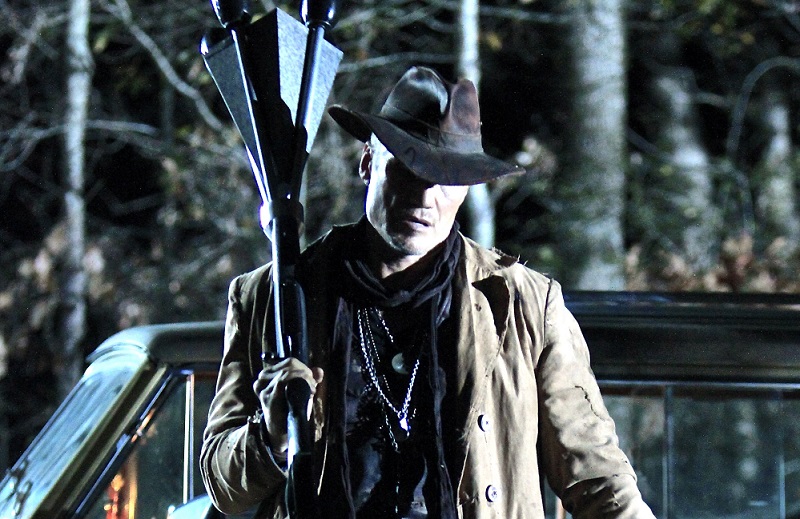 Here's a simple rule. When your small Mississipi town has a plague of triple homicides caused by a body-hopping demon, and Dolph Lundgren tells you Don't Kill It, you don't kill it. Capisce?

That's one of the gutbuster belly laughs in the latest from horror-comedy director Mike Mendez. It's Lundgren as demon-hunter Jebediah Woodley, knowing that whenever he explains this to anyone, whether it be the FBI agent (Kristina Klebe), sent to solve the killings, or the preacher and his devoted flock (Lundgren regular co-star James Chalke), they'll think he's crazy. But he'll try it anyway, in the flattest, most reasonable tone possible. Even when he's being pulled out of the room, or in the middle of a demonic blood bath. He's the voice of mistimed reason, playing perfectly against type as the guy that can never pull the trigger.

Lundgren made his reputation as a terrifying man-mountain, such as his landmark role as the granite-chinned boxing machine Ivan Drago in Rocky IV. In recent years, he's undergone somewhat of a revival in more cerebral actioneers, like the reboot of the Universal Soldier franchise. But Don't Kill It revels in his dry yet goofy sense of humor. Rather than the taciturn killer he was born to play, Woodley is a bit of a blatherer. Lundgren joked after Saturday's Fantastic Fest premiere that he has more lines in his first scene than his last five films, and he shows that those filmmakers were missing out.

It arguably took Mendez to work out what everyone else had ignored. It also arguably gave him the component that he really needed. He's never seemingly hit quite the right tone in his films to date, whether it be a little too straight-laced in his break-out success The Gravedancers, or a little too silly in monster spoof Big Ass Spider! But in the perfectly self-aware Lundgren, he has his perfect muse/foil for his brand of smartly/silly horror spoof.