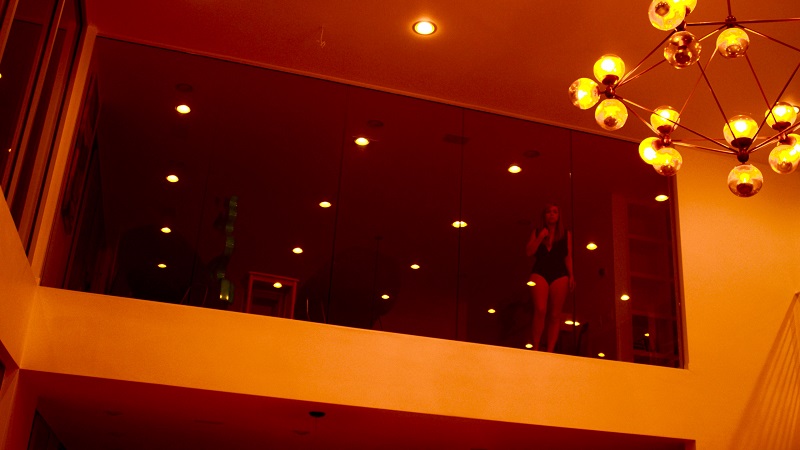 Call Fashionista a thrift-store The Neon Demon. But that's not an insult, or a budgetary commentary. Both fixate on fashion in a manner as stylized as couture itself, just from very different ends of the discount rack.

After Red, White, and Blue, and Johnny Frank Garrett's Last Word, this is British director Simon Rumley's third Texas-based project. What was screened this week at Fantastic Fest was a near-complete work print (Rumley confirmed via email that he's still shooting some footage), and catches that most pivotal element of Austin culture: the clothing thrift store. April (his Red, White, and Blue star Amanda Fuller) and Eric (Ethan Embry, who co-starred with Fuller in Cheap Thrills) run a busy little store. For him, it's his life work: For her, it's a little more. April is obsessed with clothing, swapping in and out of ensembles. It's pathological, sexual, all-consuming. It's how she defines herself. Unfortunately for her, while she's hunting for the cutest combination, her relationship and her mind are both slowly fracturing.

Austinites will recognize a whole series of locations, mostly the former St. Vincent de Paul Bouique Thrift on South Congress, which doubles as Eric's Emporium (full disclosure: longtime Chronicle contributor Marc Savlov's apartment is used in several scenes). He approaches it with an outsider's eye, catching the grimy speed and aspirational slumming that is as much a part of Austin culture as weed and bats. Yet Rumley also catches the city's social divide, as April becomes involved with a myserious and wealthy stranger (Eric Balfour) with a Hill Country mansion and an obsession with clothing that equals her own.

Rumley creates an air of ambiguity and shifting sympathies, in no small part through a whiplash edit that bounces back and forth, sometimes hypnotically, sometimes frustratingly. Components and characters float in without context, most notably Alex Essoe (Starry Eyes) as a seemingly unrelated woman signing herself out of a mental institution. He shines them through a psychedelic prism of nightmare and possessiveness, with Fuller heartrendingly falling apart faster than even her shredding life.

Yet, like Nicolas Winding Refn's high fashion horror, the end result will be divisive. The final connection between Essoe and Fuller's characters may raise some uncomfortable questions about body image. That's a core conceit within the story, but Rumley's resolution could draw more ire than even his erratic construction.