Fantastic Fest Review: The Girl With All the Gifts

A post-apocalyptic world that really grows on (or in) you 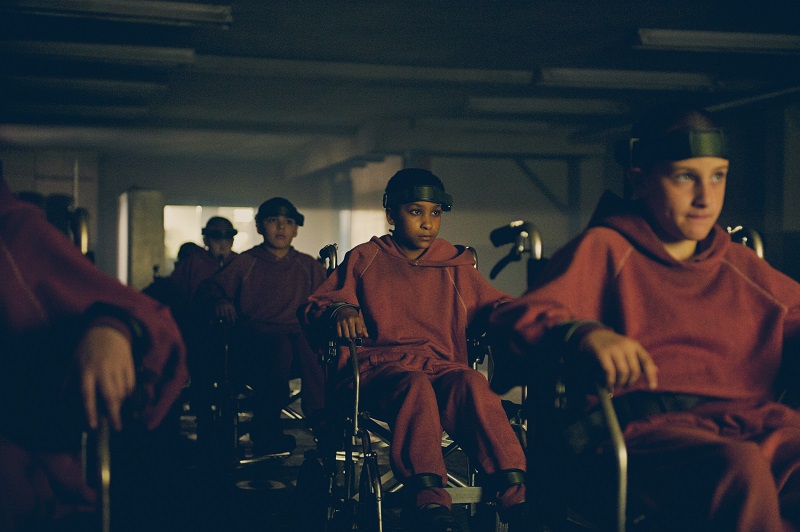 British sci-fi horror The Girl With All the Gifts is at its best when it's at its most cerebral.

No horror writer could imagine a fate as ghastly as that suffered by ants at the mercies of Ophiocordyceps unilateralis. That's a fungus that grows in their brains, turning them into what even researchers call zombies.

The Girl With All the Gifts, the new survival horror adapted from M.R. Carey's 2014 novel of the same name, simply transfers that horrendous conceit from Amazonian ants to humans. In near-future England, civilization is crumbling at the teeth and claws of the infected, known as the Hungry. The only survivors are in military installations. Hidden away in a bunker lab at one such base is Melanie (Sennia Nanua), a chirpy young girl with a breezy attitude and a nice word for everyone, especially her teacher Helen Justineau (Gemma Arterton). So why do the soldiers and scientists keep her, and the other 19 kids in her class, under constant lock and key, strapped to chairs, and treat them with raw terror?

Director Colm McCarthy (Peaky Blinders, Doctor Who) captures more than a civilization in collapse. This is an extinction-level event, as humanity sees itself overtaken by evolution. Inevitably, such stories will always fall under the shadow of John Wyndham, who was to science horror what Lovecraft was to eldritch abominations. While there are the mandatory explosions of violence that are part and parcel of a modern zombie film, he creates some astounding images as the survivors attempt to find a place in a world that has pushed them over the brink. Fields of the hungry, just swaying, and a coolly terrifying reimagining of the iconic British Telecom tower.

His greatest asset is Nanua. Young actors are often a little unnatural, but that's exactly what Melanie is. Nanua amplifies that off-kilter, undeveloped aspect, veering into sociopathic behavior. But the question McCarthy always asks is whether such standards can apply, in either of these circumstances, to whatever this childlike entity is? That was always Wyndham's strength, to throw out the idea that humanity has any more moral right to survive than a triffid or a psychic alien or, in this case, the Hungry do.

If Girl has flaws, it's in nods to the North Star of modern British horror, 28 Days Later, in how it depicts the soldiers – as cannon fodder, not much smarter than the disposable nameless in a Resident Evil. There's even a pivotal death that's a trope from much dumber movies, and it feels out of place.

Fortunately, Paddy Considine's performance as Sgt. Parks, the embittered but ultimately humane protector of the survivors, gives a world-weary depth. It's also his job to carry the moral case that the Hungry, as the zombies are called, and whatever Melanie and her kind are, should constantly be treated as a threat, a plague to be scoured away. It's Considine that makes cute, happy Melanie into a plausible monster.