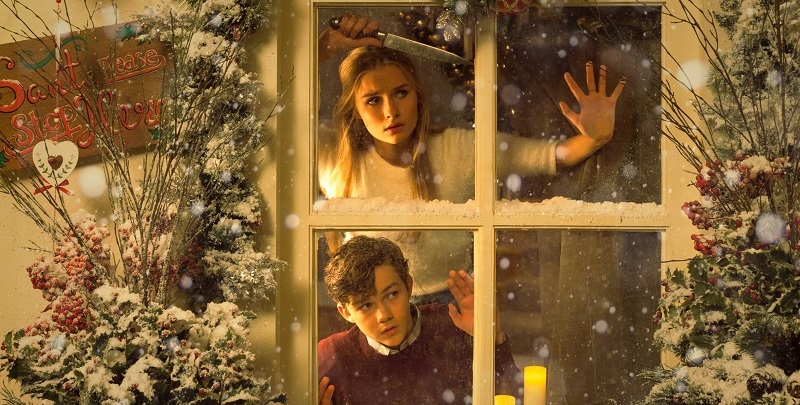 What was the difference between an Eighties John Hughes film and an Eighties Wes Craven movie? Pretty much just the body count. So what do you get if you mix the two? Better Watch Out, a deliciously subversive take on the home-invasion thriller.

Arguably the greatest home-invasion movie is actually Hughes' Home Alone, and it's overtly nodded at in the second feature from Chris Peckover (director of Fantastic Fest 2010 title Undocumented). In Better Watch Out (which played at Fantastic Fest under its original title Safe Neighborhood, it's Christmas in small-town America, and Luke (Levi Miller, Pan) has one last chance to admit he has a crush on Ashley (Olivia DeJonge, Hiding) before she moves away. The problem, as his best friend Garrett (Ed Oxenbould, The Visit) points out, is that Ashley is his babysitter, and she's five years older than him. His romantic schemes are automatically a nonstarter, but then really thrown into disorder when mysterious figures start appearing around the house.

Peckover embraces the grand tradition of home-for-the-holiday horrors, with the needy and nerdy Luke (played with charming geekiness by Miller) and the gutsy Ashley (DeJonge having her own ass-kicking adventures in babysitting) wondering what's going on, and who is tap-tap-tapping at that door. Twinkling lights that make extra shadows, seasonal music with a distinctly unseasonal twist, and the perennial menace of jump scares and carolers looking for free hot chocolate lull the audience into thinking they're in for a classic romp.

And then he pulls a sickening handbrake turn that drops everything on its head.

This is no cheap bait-and-switch, but a careful rebalancing between real malice and cartoon craziness. It's still a wonderfully twisted excursion into the same Hughesian tradition, but with an evil grin. Throw in hilarious cameos from the gleefully foolish Patrick Warburton (and his trademark scarcely-suppressed smirk) and the martini-dry and acerbic Virginia Madsen as Luke's parents, and you'll never watch Home Alone in the same light again.