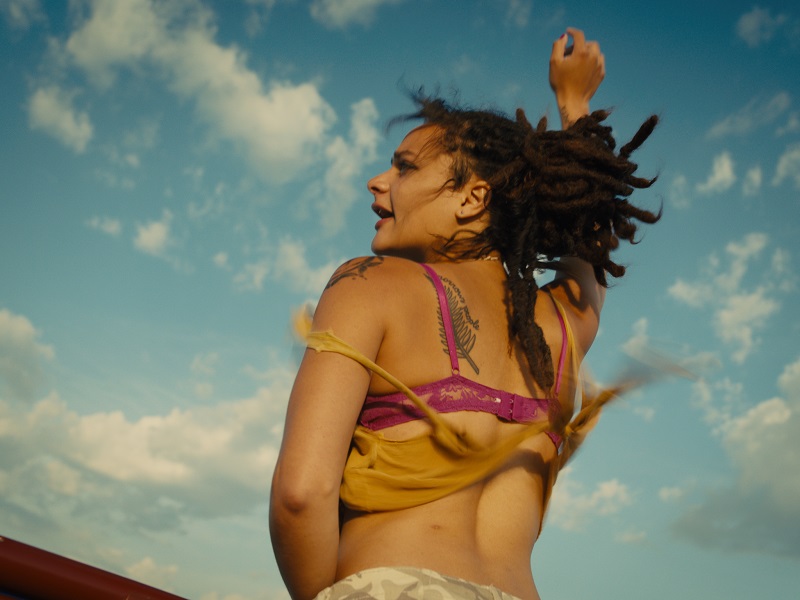 Not many first-time actresses see their debut feature at Cannes, but that's exactly what happened to Sasha Lane, star of American Honey. She said, "Oh my gosh, my mind is still blown."

The film, which screens at Fantastic Fest, is a contemporary American road trip. Star (Lane) is an orphan, transplanted from Texas to Oklahoma, buried under burdens with which no 18-year-old should contend. One day, she dumps it all and runs away with the circus – or the next best thing for a poor teen in a nowhere town. She joins up with a team of kids selling magazine subscriptions door-to-door, headed by the hard-nosed Krystal (Riley Keough, The Runaways, The Girlfriend Experience) and her most valued seller, Jake (Shia LaBeouf). It's a grift, a hustle, the definitive hard-knock life, but it's also the closest thing to kinship that most of this team have ever felt, as they drift from Kansas City to the North Dakota oil patch.

The story behind the story, of how writer/director Andrea Arnold (Fish Tank, Wuthering Heights) made Lane her muse, has become somewhat of a legend. The actress said, "Andrea ended up coming to me on the beach when I was on spring break in Florida." They started talking about the idea of the film, and of Star, and how Arnold wanted to hang the whole story from Lane's shoulders. After what Lane called "a lot of leaps of faith and 'What else do I have to lose?' I just finished school and went out and started working."

That work was the long haul between cities and location shoots, and much of what happened on camera in the van was, Lane said, improvised with the simple direction from Arnold of "you do what you do." While the idea of driving hundreds of miles with relative strangers may seem odd to some, "I like that lifestyle," said Lane. "I'm from Texas, and I'd road-trip to get to spring break. People who aren't from the Midwest or are from the South won't be used to it."

The shoot was unconventional, but reflected what the characters were going through. For Lane and the rest of the van posse, trapped in a metal box with the camera rolling, sharing motel rooms, singing along to rap tracks, there was one question: "Are you down? People were always checking the real factor. With that many strong personalities, you're always going to have conflicts, but we were like family."

However, it was also a set, and Lane said she found the intense but transitory nature of a cast to be a little unsettling: "People form these bonds and then they leave."

Then there was the fact that she and the rest of the crew were basically first-timers, traveling with more established names like Keough and LeBeouf. Yet Lane approached them like any other member of the cast, and they came at her the same way. She said, "I didn't have scenes with Shia, I didn't have scenes with Riley, where I'm thinking, 'Oh, shit, this is a real actor.' … We all met each other as people, so there wasn't this kind of feeling of levels of professionalism."

Now Lane is the focus of attention, with early award season buzz around her naturalistic portrayal as the street-savvy but principled Star. Yet she's still getting her head around the fact that she's in a movie. "Every day I'm like, 'Wow, what?' And I feel really vulnerable. People I know are seeing it, and people I don't know are seeing it."