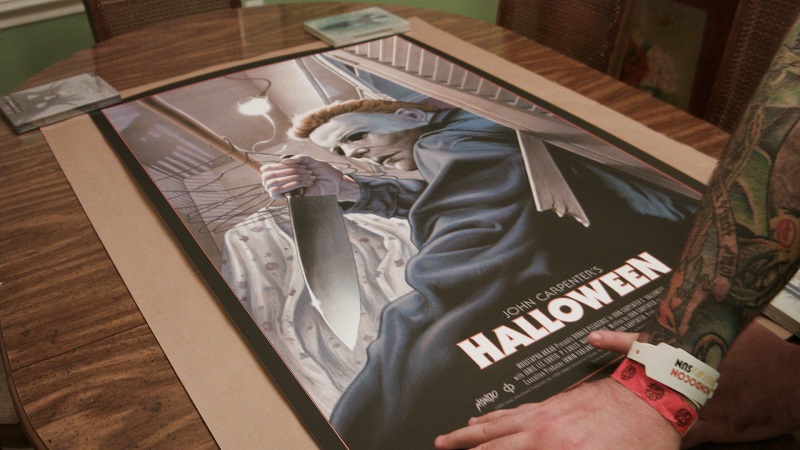 "Everyone knows movie posters. If you say those words, they immediately get one image or another." Director Kevin Burke on 24x36: A Movie About Movie Posters.

Kevin Burke remembers the print that led him to make 24x36: A Movie About Movie Posters. "It was There Will be Blood by Olly Moss. I'd never seen a screenprint movie poster before, and I immediately fell in love with it. It had been years since I had cared about a film poster that much."

The print was a gift from his fiancée, and took Burke back to his childhood habit of asking his local cinema if he could have the lobby posters after a film had finished its run. He said, "They would call you, or call your mom, and tell you, 'Hey, Kevin can have this poster,' and I'd get on my bike and go get it. when I got this screenprint, that feeling came back."

For decades, the poster was the first image audiences would see of a film. Burke said, "Like many other filmmakers, I used to spend a lot of time in video stores and movie theatres, and the art was everywhere. They used to make these promises of grand excitement and adventure, and you could make your decisions about what this story was about, and whether this film could deliver on it."

The film, which receives its world premiere today at Fantastic Fest, is in part a potted history of the lost art of mainstream movie posters, and the giants – the Saul Basses, the John Alvins, the Reynold Browns, and the Bob Peaks – that created some of cinema's most enduring images.

Don't know who they are? You'll know their work if you see it, whether it's Bass' minimalist Vertigo, Alvin's Sistine Chapel reference for E.T. The Extra-Terrestrial, Brown's thrill-inducing The Creature From the Black Lagoon, or Peak's sweat-drenched Apocalypse Now. "Everyone knows movie posters," said Burke. "If you say those words, they immediately get one image or another, one of the iconic ones like Blade Runner. It's something they're familiar with."

Yet it's not just about paying homage to these anonymous monarchs of the one-sheet, most of whom were never even allowed to sign their work, and whose artistic legacy has been swallowed up by Photoshop floating heads. It's also about the new wave of screenprint collectors' editions, and limited run lithos that has exploded over the last decade. Burke said, "Once we decided on mixing that narrative of two worlds together, and older film-printed art and newer screenprinted art, it was really important for me to deliver a film that was accessible, and not just for fans. I wanted to introduce a lot of new people to the world of film poster art."

However, Burke traveled across North America to visit a multitude of gallery owners, private collectors, and creators, "being able to pick their brains about the fandom, and their own love for this art. The artists who create this, they are fans of the art, and of the films, too."

With 50 interviews and seemingly endless hours of tape, Burke credited the production team at Snowfort Pictures for helping him wrangle the movie into something both entertaining and informative: not just about the artists, but about the market, the ethics, complexities, and legality of working with licensed properties, and the overwhelming fear that the current expansion is a bubble that will inevitably pop.

Far more challenging was the extra square footage of prints that he acquired on his journeys. "Dude, I had no humility when I was doing these interviews. My collection ended up growing exponentially. I'd always make sure to visit them with cash."

So with that ever-expanding collection, if the ultimate nightmare happened and his house caught fire, which two posters – one modern screenprint, one classic one sheet – would Burke save first? For the contemporary, he said, "I would love to say that Olly Moss, There Will be Blood, but I would have to say White Zombie by Gary Pullen."

As for the classic print, it would be the framed copy of The Changeling, the classic George C. Scott supernatural movie which, surprisingly, has never had a modern screenprint. Burke said, "One day, if I decide to commission a print myself, that would be the property."