Going to a show at a drive-in movie theatre these days is an exercise in intense nostalgia role-playing. You roll up with your nuclear family blasting some doo-wop on the car stereo, grab your classic, cheap concession fare, and then settle in for a Fifties sci-fi or tame horror flick, or perhaps even an Sixties teen beach movie if you’re nasty. 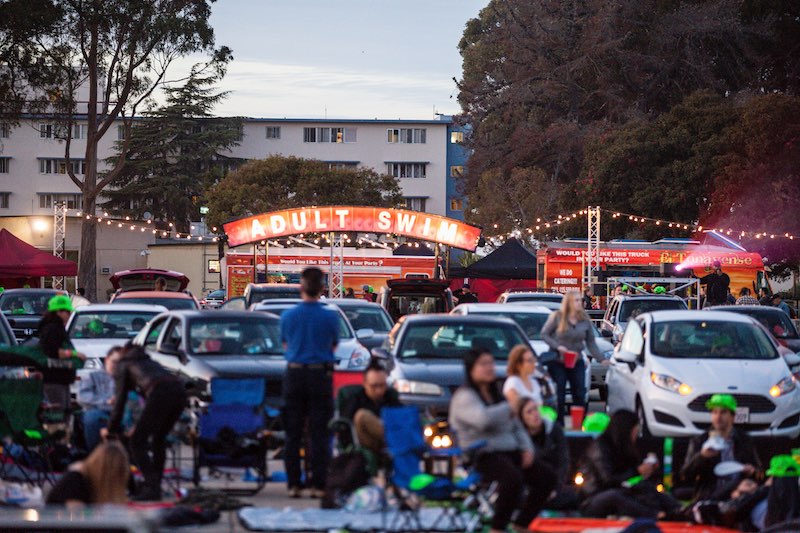 But if you’re up for a different kind of drive-in experience that isn’t a desperate attempt to re-create mid-century American splendor, Adult Swim is offering an alternative. The popular cable network is stopping by Austin’s Blue Starlite Drive-In on Tuesday, August 23 as part of a 10-city tour. The event will feature previews of upcoming content, as well as unaired pilots and specials. Games, concessions, free popcorn, and food trucks will be available on-site, with vouchers for a free meal from a food truck given out on a first-come, first-serve basis.

If any other TV network were to pull something like this, it would probably just come off as a lame publicity stunt, but with Adult Swim at the helm, it has the possibility of being a legitimately cool and worthwhile publicity stunt. For those unfamiliar with the allure of the late-night spin-off of the Cartoon Network (such as those over 35), picture the “it” factor of MTV at its height, but replace most of the music videos with raunchy and twisted original animation, imported anime series, and psychedelic live-action comedies, all peppered with between-show “bump” segments featuring work from top musical and visual artists and cryptic messages to viewers. It’s like catnip to those darn millennials.

The show is free, but requires an RSVP beforehand for entry. No one under 18 years of age will be allowed to enter, so no need to worry about crying babies spoiling the ambience. The show officially starts at 8:30pm, but the doors open up at 7pm, and cars can begin lining up as early as 5:30pm, so you might want to plan on getting there early. They’ll apparently be checking bags as well, so keep the custom concessions at home.

Adult Swim has released some pretty wild one-off content in the past, including the sensational mind-bending short “Too Many Cooks” and the unaired ultra-violent pilot Korgoth of Barbaria, so the potential of seeing something unique and bizarre is quite high. And what better way to experience it than under the stars and in a parking lot surrounded by your fellow miscreants?

The Adult Swim Drive-In Tour is Tuesday, August 23, at the Blue Starlite Theatre (2013 E. 51st). Doors at 7pm; car lineup begins at 5:30pm. See www.adultswim.com/presents for info and to RSVP.