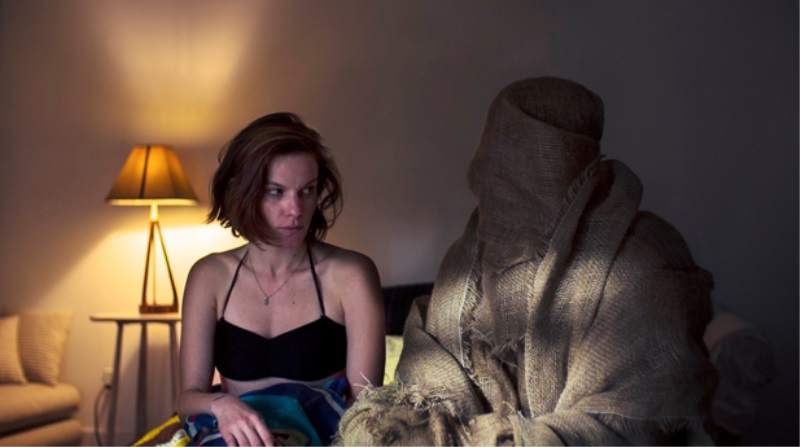 Gothic romance is not defined by gargoyles and dark moorlands. It's a sense of mystery in an unsure universe, that subversive thrill of transgression. That's why it's called romance.

Lace Crater (Invincible Pictures) arrives on VOD this week with a sudden burst of in-car music, as a road tripping group start discussing what one of them calls "dark and obscure sexuality." Their low-water mark is eating dirt, but kinks get stranger from there.

Like any good weekend in the woods, the party starts telling ghost tales, but these aren't the normal spooky stories. These are unnerving incidents that have a degree of intimate unease to them. Even after that, rather than share the guest bedroom, Ruth (Lindsay Burdge, A Teacher, The Invitation) decides to sleep in the carriage house – which, according to family legend, is haunted.

The spirit in this case is a terrifically polite ghost called Michael (Kiss of the Damned's Peter Vack, reunited with his fellow 6 Years cast member Burdge), who turns up to help her with a spilled drink. He looks like a burglar in a burlap sack, but his ability to suddenly transport across the room takes that off the table. Of course, that could be the molly talking, but after the end of a major relationship, Ruth is just glad to have someone to around. Conversation turns to touching, and when she discovers that Michael isn't too bad looking under his eternal shroud, the night gets hot and heavy.

Of course, as anyone that has seen The Ghost and Mrs. Muir or High Spirits can testify, this cannot end well. When Ruth throws up in the car on the way home, that is just the beginning of her issues.

Lace Crater is produced by (among others) Joe Swanberg, which makes sense, especially in the context of his almost-horror Silver Bullets. At heart, this is a highly contemporary relationship story, just with an intriguing and often intriguingly bleak twist. Where It Follows had a similar underlying concept of the ghost as STD, here first-time feature writer/director Harrison Atkins deals less in a malevolent spirit, and more in questions of isolation, loneliness, and codependence.

There's going to be a cadre that will write this off as hipster horror (much like there are self-appointed death purists that denounced Deafheaven as hipster metal), but this is an attempt to do something fresh and honest. Burdge already proved her ability to inject a delicate, real-life sensibility into cerebral genre fare with The Midnight Swim, and gives Ruth a fragile sense of near-collapse. Moreover, Atkins creates a queasy yet still emotionally honest sense of failing relationships.

Slickly and subtly hypnotic, this is a mood piece he creates through melding Gideon de Villiers' graceful handheld cinematography with Alan Palomo's eerie score, and arguably the most important component – the sound design by Nathan Ruyle. The sonic landscape, like layering conversations over each other, or a sudden noise that is purposefully off the beat, feels instantly contemporary. But the underlying narrative is pitched between Poe, Godard, and early Mike Nichols, and a modern evolution on Seventies character-driven supernatural horror like The Man Who Haunted Himself.

Much more simply visceral is Bite (on DVD and Blu-ray from Scream! Factory), which begins with an amazingly annoying bunch of bachelorettes (ask any bouncer or bartender, and bachelorettes can be the absolute worst) on an island getaway. It's hard to blame the bride-to-be herself, Casey (Elma Begovic). Her worst crimes are having annoying friends and being a little squeamish about bugs. Plus, as her irksome friends point out, she may be marrying the wrong guy – right on paper, but just wrong for her.

The opening pre-credit sequence is captured by those friends, POV-style, but haters of found footage, fear not. The last shot is Casey being validated in her fear of insects, as something unseen takes a nip under the water of a distant grotto.

Like Lace Crater's Ruth, Casey comes back with a bad case of something unpleasant, although she's less sure of what exactly is happening. Was it the bug bite, the food, the random guy she hooked up with on a wild night out, or whatever happened when she woke up naked on the beach? Her annoying friends, constantly ready with a camera shoved in her face or relationship advice, are ill-prepared for her new affliction.

Director Chad Archibald has undoubtedly developed as a filmmaker since soggy retro-horror The Drownsman. But the real victories here are from the effects team of Jason and Mason Derushie, Moira Garr, and Ariana Roberts, as Bite quickly reveals itself to be a straight-ahead, if innovatively gooey, body horror. Touching on the classic themes of the genre (maternity fears, rot, and a loss of self), they actually manage some genuinely boundary- and taste-pushing work. This is less on the track of the Contracted franchise, or Thanatomorphose, but a surprisingly effective nod to Cronenberg’s The Fly. Seriously, you may never look at caviar the same way again.

Yet just as Burdge carries the emotional core of Lace Crater through sympathy and empathy, Begovic makes those effects resonate by embracing the sticky, icky horror. Casey's uncanny affliction is, like Ruth's, really simply the unleashing of what was already inside. When her transformation really kicks in, she dives wholeheartedly into the role of monster – if one with a streak of humanity still rippling underneath the skin. 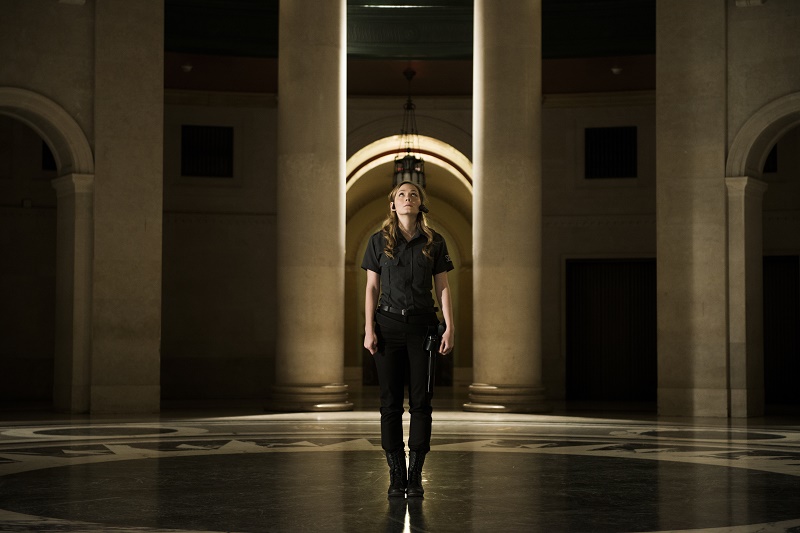 Louisa Krause takes in the architectural appointments in The Abandoned

Hewing closer to the modern haunting is The Abandoned (on DVD and Blu-ray from IFC Midnight), a traditional spooky mansion tale. Streak (Louisa Krause, Martha Marcy May Marlene) is a single mom who has taken a job as a security guard in a rambling, exquisitely appointed, but now empty apartment complex. "Most people don't last more than a week," warns her burned-out fellow guard Cooper (Jason Patric), but he's mostly talking about the mind-numbing tedium of the job. Watch monitors, patrol once every couple of hours.

The building (actually shot in a series of New York edifices, including several courthouses) is suitably and perfectly vast and eerie, ripe for Streak to wander and ponder. Of course, there's a lot more going on than Cooper's dismissive claim that the complex was never finished because of finances. (After all, who would build an upscale apartment complex with that many weird catacombs?) Even the always-welcome injection of Mark Margolis (before his career-defining turn as Hector Salamanca in Breaking Bad and Better Call Saul, one of the great "I know that guy from somewhere" character actors) as a pill-popping homeless interloper doesn't distract from Streak's search for the source of weird noises.

Unsurprisingly, there are dark secrets aplenty, with much initial tension provided by Cooper's balance between disinterest in the building and prurient interest in Streak. Then first-time feature director Eytan Rockaway tips his hand into the supernatural, with an emphasis on POV chills, practical effects, and a clear nod to the epochal documentary Titicut Follies. It's not breaking any new ground, but it is quietly effective.

That said, there's a kink in the resolution that will either provide an oddly rewarding emotional resolution, or feel like the cheapest and most trite of twist endings. If it works at all, it’s because Krause takes a conventionally written horror heroine, and adds tender pain to the scars she bears. She makes you buy that a woman with a fear of the dark and enclosed spaces would take a job as a security guard in a crumbling and shadow-sullied labyrinth, and without that, nothing here would really work.

Stylized modern noir Too Late (Drafthouse Films/mTuckman Media) was designed to be seen on 35mm – quite literally, since director Dennis Hauck shot each scene as exactly the length of one roll of Techniscope. John Hawkes epitomized the world-weary gumshoe with more than a paycheck on the line, and its brutal and heartbreaking narrative lodged it firmly in my list of top 10 festival films you haven't seen yet. After a limited run in its native format, it finally arrives on iTunes with four hours of extras (read our review of the original theatrical release here).