With the 2016 lineup here, time for VOD and DVD reruns 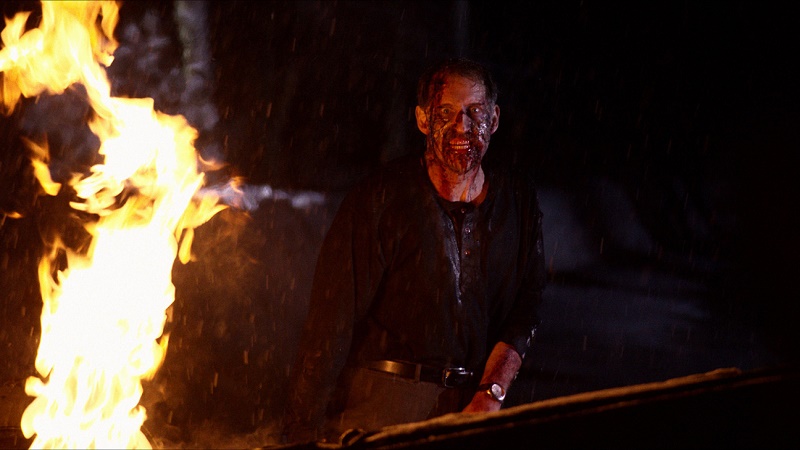 Journey back into madness with The Mind's Eye, one of a slate of Fantastic Fest 2015 titles headed to DVD and VOD this month. (Image courtesy of TIFF/RLJ Entertainment)

Festival films have a life cycle. Some drop by for a quick pre-release publicity boost, and some use screenings as a launchpad. With the latter, there's another cycle. About a year later, they start to make their way to home release. With the Fantastic Fest 2016 lineup arriving this week, some 2015 gems hit DVD and VOD.

Some have already had a shot at an audience: for example, French steampunk animation April and the Extraordinary World got a full cinematic release in March before getting a Blu-ray release through Universal this week.

Yet this is the season for a few lower prestige (but no less noteworthy) films to get their chance. Heading (no pun intended – well, maybe a little bit) the list is The Mind's Eye (RLJ Entertainment), retro horror funster Joe Begos' second film after FF 2013's Almost Human. It starts with the perfect warning, and an homage to Abel Ferrera's The Driller Killer: "This film should be played LOUD." Eh, maybe all Begos' films should come with that note, since he's a firm believer that films should pummel your brain with schlocky fun.

It's a psychokinetic freak-out when Lauren Ashley Carter looks into The Mind's Eye. (Image courtesy of Fantastic Fest/RLJ Entertainment)

A flashcard tells us it's November 1990, but that's a little redundant: the post-Carpenter synth score and the bearded drifter in plaid shorts gives away that Begos is in period-genre mode.

Of course, this is no regular drifter: Zack (Graham Skipper, Almost Human, Carnage Park) is a psychokinetic, who finds himself rousted by the cops. That's their mistake, as he blows the windows out on their car and bounces the small town sheriff into the side panels. Yet we soon find that he's not alone, and there are others with his skills out there.

So off Zack goes to the Slovak Institute of Psychokinetics, where they promise to connect him with another of his ilk, his missing love Rachel (Darling's Lauren Ashley Carter).

Psychokinesis used to be sci-fi's go-to paranormal skill: far more cinematic than remote viewing, but still cool enough to seem like the kind of thing that shady intelligence agencies would be interested in. Clearly, this isn't going to end well, and there's some sinister conspiracy at play. Maybe not as weird as FF 2011's hyper-psycho-DayGlo Beyond the Black Rainbow, but the evil scientists trying to steal psychic powers through extracting spinal fluid feels as perfectly of the era as the ubiquitous wood paneling.

Begos clearly wore out his copy of The Fury (yes, Virginia, there were telekinetic thrillers before Scanners), with neck-snapping, vein-popping, head-exploding goriness his real agenda. The opening half hour, which concentrates in scene-setting, isn't exactly what you'll be paying your rental for. Yet what The Mind's Eye offers, and what Begos does best, is gonzo practical effects lunacy. So don't worry, there's buckets of goo and grue pouring from every orifice in the second half.

Plus, Begos gives another opportunity to see the rising cadre of genre performers, such as Carter (never less than enthralling, and with a superlative grasp of stylized horror), her Pod co-star Brian Morvant, Almost Human's Josh Ethier, and FF regulars Larry Fessenden and Noah Segan (sporting a splendidly sinister eye patch). 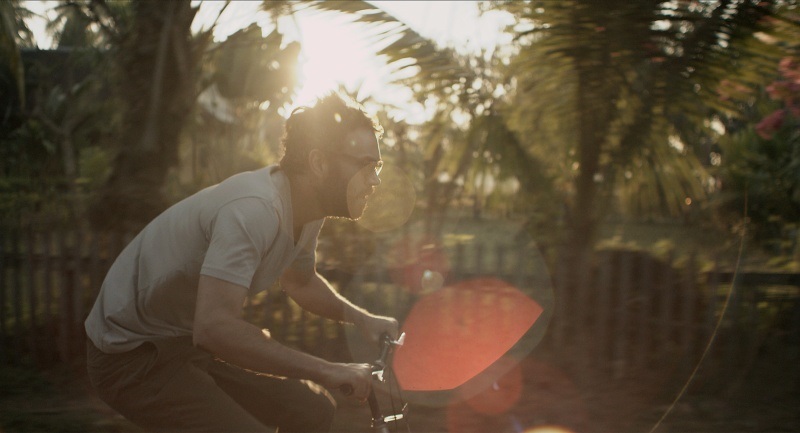 Fantastic Fest has a long tradition of introducing viewers to films from remote and often heretofore unseen film cultures, and River (Well Go USA Entertainment) had the distinction of being the festival's second Laotian title ever. That said, it's more a Canadian film shot in Laos, written and directed by Jamie M. Dagg and starring Canadian actor Rossif Sutherland, (Reign, Crossing Lines) as John Lake, an American doctor working in a small rural hospital. After one particularly tragic case sends him close to burnout, his boss dispatches him on a forced vacation for a few days. That's where everything goes wrong, as he does the right thing for the right reasons and ends up on the wrong side of Laotian law.

It sounds like the setup for a classic and racially tinged Ugly American-esque tale of an upstanding yank facing down a corrupt foreign legal system. In fact, it's the polar opposite of that. John initially means well, but makes every mistake possible. He runs, he hides, he evades the police, he drags everyone else into his mess. While the audience is intended to (and does) sympathize with his plight, it's with the crawling sense that he's only making it worse. It's the anti-Midnight Express, as John questions whether he has gone too far down the wrong track.

That's the real power of River. It's how Dagg (and the slow, graceful cinematography of Adam Marsden, complimented by Sean-Michael Hamilton and Cody Partridge's moody, mournful score) reveals this to be a morality tale, with the overwhelming question of whether John has gone from a good man on the run to a selfish man evading his own sins. 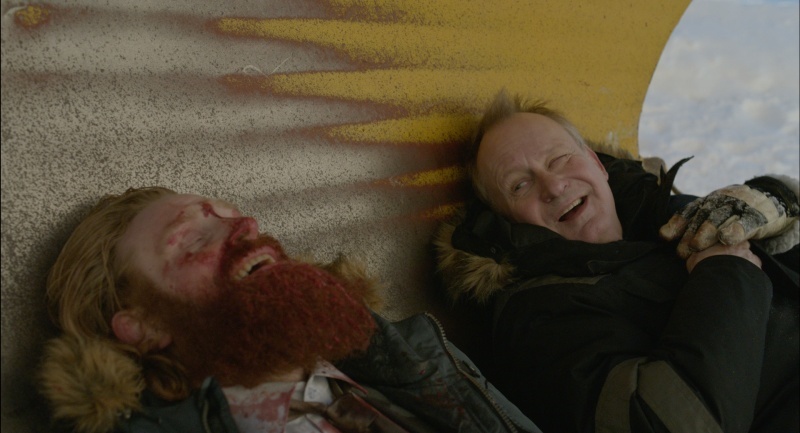 You have to laugh in In Order of Disappearance. (Image courtesy of Fantastic Fest/Magnolia Pictures)

By contrast, In Order of Disappearance (Magnolia Pictures, arriving on VOD Aug. 26) is a crime movie of a different and more humorous ilk. It begins with an unimportant moment (Stellan Skarsgård as affable Nils, being given a tie by his wife) and a vital one: His son being kidnapped from his job at a snowbound Norwegian airport.

Nils is the local road clearer in Tyos, a major job in a community that dwells constantly under the threat of snowdrifts. A Swedish migrant, he's been awarded the citizen of the year award, and being pushed as a local political candidate, but he's far more excited by the arrival of a new snowblower (an ominous sunflower and crimson monster that hangs violently over his head). Yet when his son's body is dumped on a railway station, stoic Nils becomes Skarsgard at his most deadpan and nihilistic. He's a steel-fisted vigilante, rolling up the criminal organizations responsible for his son's death. No wonder Liam Neeson is being lined up for the inevitable English-language remake.

The U.S. title paints the film as a crime drama, a tonal shift from the original title (Kraftideoten, most accurately translated as massive jerk). There is humor, but it's the dark comedy of a mouth frozen to a rifle barrel. Much of the more overt laughs come from Pål Sverre Hagen as the Count, the pony-tailed, vegan crime boss who seems far more chagrined by arguments with his ex-wife about Froot Loops than he does about his criminal empire being rolled up by an enraged Swede with a snow plow and a sawn-off rifle.

That, and the elegiac but entertaining way in which Nils dumps the corpses off a waterfall, before flashcards give their names as a choir sings. It's a brutal repetitiveness that pays off, not least because Skarsgard is no Charles Bronson in Death Wish, nor even Michael Caine in Get Carter. Yet as a weapon of purging vengeance, he's as icy and effective as the plow he wrangles through the wastes. 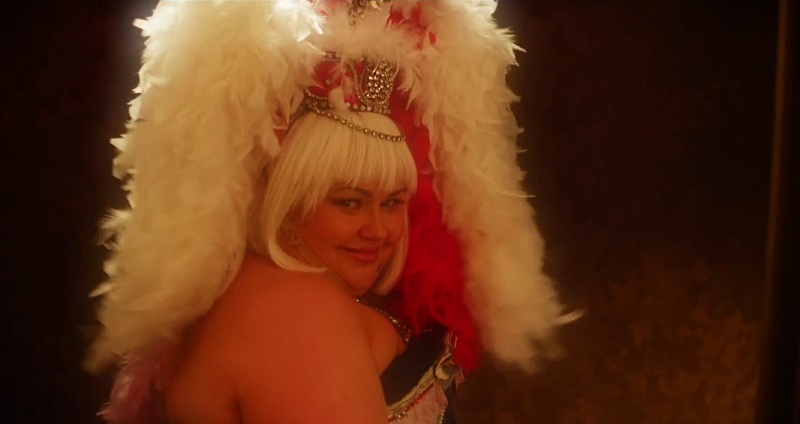 M is for muff, and matador, and mermaid, and mess, and a whole heap more in ABCs' of Death 2 1/2. (Image courtesy of Drafthouse Films)

ABC's of Death 2 1/2 (Drafthouse Films, on Vimeo now) is not a Fantastic Fest title per se, but may as well be. The ABCs of Death franchise is basically the FF alumni club, built around one central idea: everyone gets a letter of the alphabet, and has to come up with a short, funny, grisly, gruesome, tragic, but most importantly short film to be tagged together for the anthology. So far, the series is two full-fledged titles in, with word from the team that there may be a fun conceit in the offing for a third. However, in the interim comes this proxy.

Not everyone involved in No. 2 had previously screened at Fantastic Fest: in fact, one segment, M, was reserved for a filmmaking competition, with the best 'M is for' submitted winning that elusive 26th slot. The ultimate winner was Robert Boochick's bath salts sight gag "M is for Masticate," but this left an important question: How good were the other ones?

That's what 2 1/2 answers, by anthologizing 26 of the best of the rest. It also answers why some segments didn't make the cut, and it would seemingly be nothing to do with quality. For example, Christopher Younes' "M Is for Maieusiophobia" is reminiscent of both Robert Morgan's stop motion "D Is for Deloused" (artistically) and Chris Nash's "Z Is for Zygote" (thematically), which is a shame because it's disturbingly brilliant/brilliantly disturbing. Similarly, Tim Rutherford and Cody Kennedy's opener "M Is for Magntic Tape" heads close to the Astron 6 territory of Steven Kostanski's "W Is for Wish." Including them would have felt repetitive, which is the cardinal sin in an anthology.

The quality between the best and the worst is, as is to be expected, erratic. Yet, like the core ABCs themselves, there is constant ingenuity on display, and proof of some real talent. Michael Schwartz's farming serial killer stunner "M Is for Manure" is grisly but astoundingly inventive, and following it with Steve Daniels' Mad Max on big wheels spoof "M Is for Marauder" shows excellent balance. There's even a really impressive proof-of-concept short in "M Is for Martyr," a fascinating take on the Southern Gothic trope by Jeff Stewart.

So while this collection may not have the name recognition of the earlier entries in the series (no Soska Twins, no Angela Bettis, no Ti West, no Larry Fessenden, Rodney Ascher, or Julian Barratt), at $5.99 on Vimeo, this download-only release is disturbingly good value for your money. Plus, if nothing else, you'll be forced to look up the word "munging." You're welcome.