Do You Accept The Invitation? 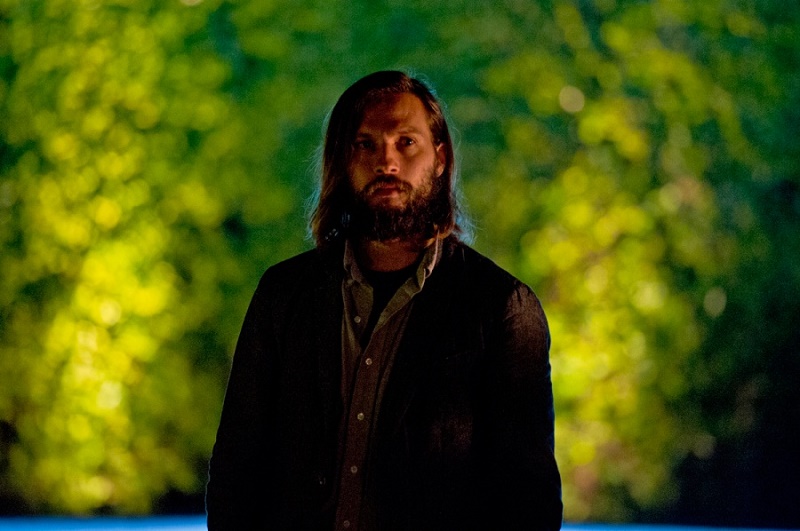 "This is a character who is always on edge." Karyn Kusama on Logan Marshall-Green as Will in The Invitation. (Image courtesy of Drafthouse Films)

Just because you're paranoid, that doesn't mean they're not out to get you. That, according to director Karyn Kusama, is a core component of the creeping dread behind psychodrama The Invitation. She said, "For me, it was just about the notion of vigilance."

It’s an early morning call from Vancouver, where she’s location-scouting for an upcoming TV episode. Over the last two years, the filmmaker has moved heavily into episodic drama, with episodes of The Man in the High Castle, Billions, Chicago Fire, Casual, and Halt and Catch Fire under her belt. But it's The Invitation (out today on Blu-ray/DVD combo from Drafthouse Films and currently streaming on Netflix) that has crawled deepest under the skin.

In it, Will (Logan Marshall-Green, Dark Blue) is a divorced father, recovering from the death of his young son, who has been invited by his ex-wife Eden (Tammy Blanchard) for a dinner party. Only, as the evening progresses, it becomes clear that there's more on the menu than hors d'oeuvres, beef, and small talk. While Will has become withdrawn as a way to deal with his depression, Eden has fallen in with a cult called the Invitation, which has taken a radical approach to manipulating its adherents' fates for them. Kusama said, "I’m very sympathetic to that desire to feel that we have more control over the chaos of our lives."

Kusama describes the film as different to her earlier work (Girlfight, Jennifer's Body), but even more so for the writers: her husband, Phil Hay, and his longtime writing partner Matt Manfredi. They're most famous for big budget, high concept tentpole fare like Clash of the Titans, Ride Along, and Aeon Flux (which Kusama also directed), but she called it "the film they’ve always wanted to do. They’ve been working on it for a long time, in between all the big studio jobs, and in between all the negotiation and compromise that comes with those great big studio movies. The issue for them was always just wanting to make personal work, and I think they finally got a chance to do that."

She described their working relationship as "a family unit," but she wasn't originally intended to be the director. In fact, Hay and Manfredi were originally considering directing it themselves. However, she said, "They had been writing a lot of comedies and a lot of big buddy sci-fi movies, and I think at the time they went, ‘We should consider somebody who’s done something a little closer to what this is.’" When she started reading the script and was excited by the story, "They finally relented and let me direct it."

The appeal to her was that the events of the dinner party and the way they were told undergo such a radical tonal shift. Kusama said, "It created this really interesting narrative structure in which we’re watching one kind of movie for a really long time, and then we get the opportunity to see it veer into something completely different."

That's reflected in the cinematography by Bobby Shore which, for the dinner party portion of the evening, emphasizes the controlled elegance of long tracking shots, before breaking down into a more handheld chaos. Kusama said, "I was really excited to use all those tools of cinema that you can still use in a small film. You can still put a camera on track for most of the shots, and have it be potentially really interesting and dread-inducing."

For the director, the sudden change in tone "mirrors the rhythms of life, that we can think we understand the situation we’re in, but in fact there’s a larger picture at work, or there’s a genuine danger that we might have felt but not quite confirmed."

That made the casting of Will so important, and his ability to capture that sense of vigilance. Kusama said, "This is a character who is always on edge, and who can’t help but mistrust the reality in front of him. Because he knows from firsthand experience how quickly things can change." And while Will may seem paranoid to his friends, "in many respects, he was right, he was correct in his assessment. Things weren’t right."

The Invitation (Drafthouse Films) is available on Blu-ray/DVD combo pack now, and also streaming on Netflix.