The Mystic Western Game Jam Looks to the Stars

Nothing fires the imagination quite like the American West – the open sky, the merciless sun, myriad stars, and endless possibilities of glory, disaster, redemption, and damnation.

These dreams have inspired the works of generations of artists in every medium imaginable, so it should come as no surprise that creators of video games should find ample inspiration in the mythical West that exists in our imaginations.

A shot of the games presented at a past Marfa Film Festival (Source: Juegos Rancheros)

The impetus for the most recent mass exploration of Western themes and motifs in the field of video games comes from Juegos Rancheros, the Austin-based nonprofit collective of independent game developers and fans. Juegos Rancheros organized a game jam around the theme of "The Constellation,” challenging makers of video games to complete a small project in the space of less than two weeks – a blink of an eye in the world of game development.

Selections from this jam will be put on display as part of the Marfa Film Festival, an exhibition of independent and experimental film held in the remote West Texas desert town from July 13-17. Over 50 games were submitted from creators across the United States and even from developers from such faraway lands as France, Japan, and Russia. The mystical appeal of the desert knows no national borders, as seen from some of the standout entries listed below and already available for free download by the public.

You have until midnight on Wednesday, July 6, to vote for your favorites.

The creators of -to west seem to have interpreted the “mystical” part of the title of the game jam as being synonymous with “psychedelic.” As a train steams across an abstract West (American or otherwise), the player has control of trippy visual effects in the background. It’s less of game than it is an interactive art-toy.

From a Kyoto, Japan-based Japanese-Taiwanese-Irish-American developer comes this surreal piece about a man searching for answers in the American desert in the aftermath of the collapse of a worldwide futuristic Chinese empire. But is that what it’s really about? Consumed “Orient” seems to have something to say, even if what that is isn’t immediately apparent.

Dubbing Heroes: In a Foley of Violence
Spotline

This offering from a French developer takes a novel approach to the “Mystic Western” theme, casting the player as the voice actor and sound-effects guru in a storybook Western tale. When prompted, the player makes sounds and speaks lines into a microphone, which advance the action and play back with adjusted pitch. It’s a refreshing break from the violence and existential quandaries presented by many of the other entries. 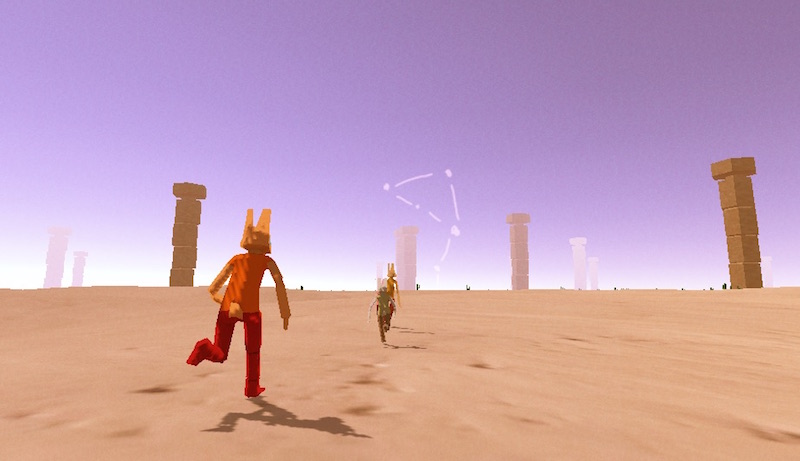 A group of rabbit-men escape from a cage, steal a car, and cruise across a desert of cacti and stone pillars, aiming for the last constellation of stars in the sky. Where did all the other stars go? Does the desert have an end? Some questions are better off unanswered.

True to its name, A Quick Death is a two-player quick-draw game controlled with just one button – shoot. The longer a player waits to shoot, the more accurate the shot will be, but the desert wind and passing stagecoaches can still throw a cowboy’s shot off. Two friends sit in the bed of a pickup truck parked near an oil well, drinking beer and staring at the night sky. The player chooses the responses to one of the friend’s questions, revealing a personal story of loss, the choices that determine the mythology of our lives, and tripping balls in the desert.

coby castle is as bizarre and enigmatic as its Dublin-based developer. It’s a sort of diorama of bird people quoting country songs while chilling out in a castle seemingly made out of graphics from every single early PlayStation game. At the bottom of the screen, the player can flip through a short story about Old West “cobys” and their adventures in medieval Europe. Giddy-up. 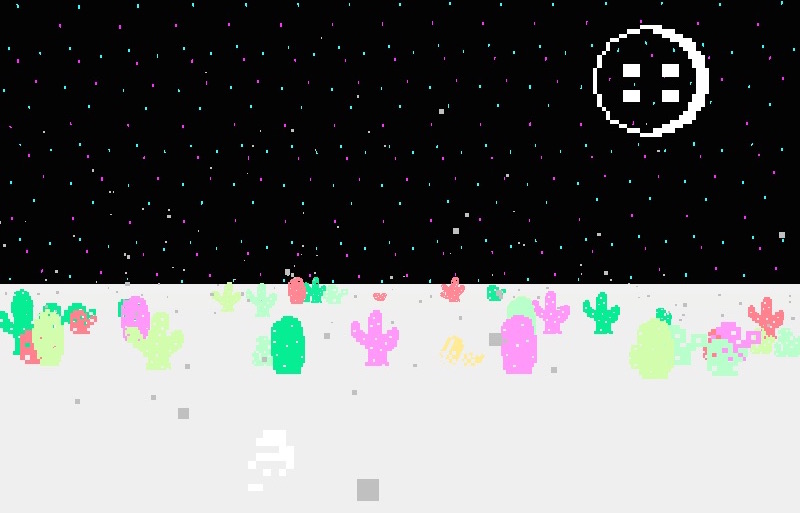 While observing an evolving desert landscape rendered in sumptuous Atari-esque graphics, the player uses the keyboard to generate and control the pitch of a synthesized soundscape. Cacti blossom are swept away by dust devils beneath a smiling sun and moon, but what do you care? You’re too mesmerized by the droning washing over you like hot, sandy wind.

An old cowboy eats the village elder’s chili containing a “special ingredient,” and thus begins a classic platforming vision quest across a surreal, Western environment. Though very short, Viaje is unusually slick for a game jam entry, probably owing to the fact that its creator, former Austinite Matthew Gallant, is a game designer at Naughty Dog, the revered development studio behind such PlayStation hits as Uncharted and The Last of Us.

A professor of game design at Concordia University presents a meditation on the mystic journey through the West experienced by millions of children in the classic edutainment game Oregon Trail. Platforms floating in a starry space each contain a sample of graphics of text from Oregon Trail, often presented partially buried or askew, like ruins slowly sinking into the desert. Think of it as a digital museum exhibit of our shared digital past.

The “West” part of the game jam theme is a bit loosely applied in this one – the player controls a spaceship and must defend a space station from destruction by enemy ships while vaguely Western-themed music plays. Though it may not be the interesting application of the game jam’s premise, the fact that the developers were able to get a fully functioning 3D space shooter working in such a short period of time is impressive.

In this short first-person narrative experience, the player floats down a river in the middle of a steep canyon, encountering smoldering wreckage sites that transport him or her to a hotel, a small town, and other locales. Over time, the events leading up to the beginning become clearer, painting a story of a family grudge and a lost quantity of gold.

In this creepy vignette from Austin-based developer George Royer, the player gambles with his or her soul in a game of dice with a top-hatted devil. In between rounds, the Dark One gleefully recounts the stories of men and women who lost their way to theft, murder, and vice in the pursuit of a new life in the West. 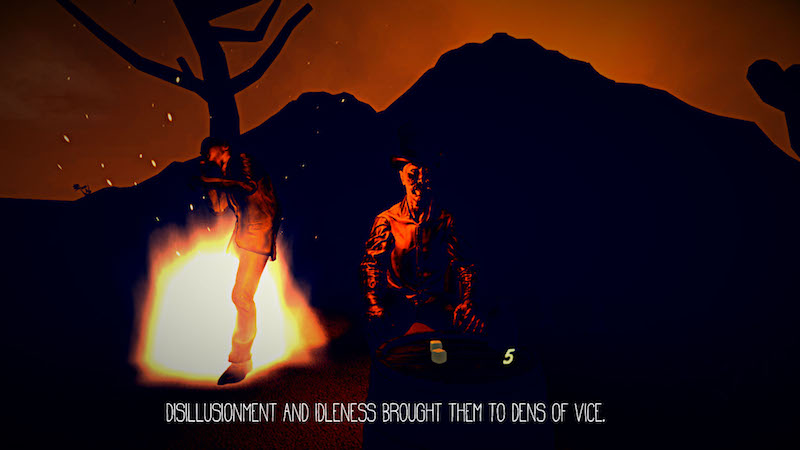 The Downward Road Is Crowded