The destructive glory of Orange Is the New Black

There is a rare but recurring mode, in Jenji Kohan productions, that could best be described as “destructive glory.” 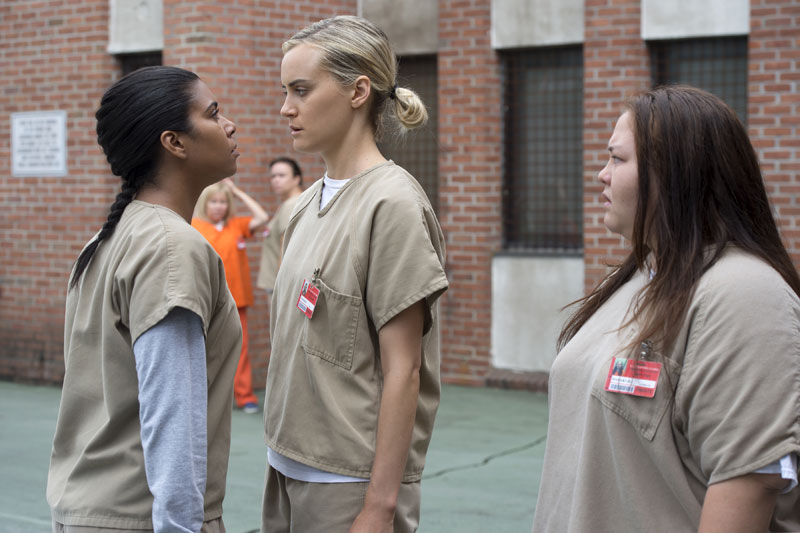 Most of Nancy Botwin’s most terrific moments in Weeds could be described that way, and certainly Orange Is the New Black’s Piper Chapman (Taylor Schilling) shares with her literary forebear a particular attraction to walking that line: “Daredevil Girl Survives Fall,” a classic late-episode clue to Nancy’s childhood and near-madeleine key to her psychological makeup overall, could very well be the self-important title for Piper’s autobiography.

What sets season 4 of Orange (which debuted last week on Netflix) apart is how the narrative center has finally calibrated itself correctly. Season 3 was an untidy mess, as storylines seemed to clamor against each other and then fall apart, but in hindsight perhaps that was merely leading us here. By decentering both the focus (previously, a tiny core group with a 1-1 ratio of historical flashbacks) and the center of gravity (previously undetermined), the show has given us its most ambitious and rewarding 13 hours yet: a biography of the Litchfield Penitentiary itself, now more than ever a microcosm of interlocking social, racial, and class concerns.

While there are the usual missteps (a glib Israel/Palestine metaphor, that thankfully peters out early in the season, typifies the show’s delight in applying a universal statement to particularities), the show reaches an equilibrium and maturity this year that it’s always seemed to take for granted. The prison is not a Brechtian or Kafkaesque slate on which to superimpose whatever NPR liberal talking points have lately distracted the writers, but in fact a very real-feeling, well-populated, subtle collection of viewpoints and histories from which to evoke universals. In years past, the series has seemed to find these two opposing ways of reaching story indistinguishable, but this season – especially in its latter two-thirds – the focus on the purely personal has finally lent it the gravitas it’s always wanted.

“I’m a person,” “These are people,” “They don’t think of you as a person,” – there are few, if any, episodes in which this sentiment is not expressly uttered, and in such a patterned way as to give the concept itself a sort of dreadful suspense, as much as the rising tensions that are a mainstay of each season ever did. Early comparisons of the newly privatized Litchfield to factory farming recall the old symbolic chicken of freedom that graced each previous season once or twice, but lead toward an inexorable, breathtaking conclusion: When lives are reduced to numbers, death and indignity become nothing more than regrettable but unavoidable remainders.

A major plot point that develops out of this bottom-line management is the drafting of veterans to serve as correctional officers, a money-saving move that manages to evoke Cheney, Blackwater, and (horrifically) Guantánamo Bay, while also bringing the lens to bear on a particular kind of unquestioning “just following orders” heartlessness that couldn’t come across using mere contractors. In particular Piscatella, the new captain, is a fascinating study in both employee mismanagement and Cool Hand Luke-type chain of command. Never more or less than he seems, the captain is affably cynical, possibly sociopathic, and definitely charming. As much as any one of these cogs in the machine – prisoners, monsters, villains, administrators – moves the pieces, he moves them toward their crisis without ever seeming to notice the mistakes he’s making.

The temptation in a story like this, which this season is a tragedy that bears its seeds in its beginning and comes to a definite close, is to throw up one’s hands and say, “This is just too complicated.” There are too many interests in play, too much money in government, too many places where human error and/or the crushing and dispiriting nature of our screwed-up system seem destined to catch a few fingers in the gears. After the last three seasons, the ambition of this season’s story – which makes itself clear, and horribly so, early on – did not indicate much more than the same: a uniquely Gen-X take on institutional racism, off-balance privilege, and the profit motive that points at vulgar commercialism and corruption and then says, simply, “Fix it.” But what we get, in the end, is a lot more than that. The last 10 minutes are devastating, unavoidable, and touched by a serious and strange destructive grace. You may not burst into tears, but you will feel something very much like awe – and given the universal circumstances Orange finds in its fourth year, and the glory of its unvarnished truth, that’s probably a lot more useful.

Binge-watching means never having to remember what happened on the last season, because it means a day or two of compact, unblinking story and a vacation from life. It doesn’t weave itself into your days, your changing moods, the way a weekly program does. But in this case, Orange may have found the antidote to that, because the final minutes, the final images, are indelible in a way few streaming shows have yet allowed themselves to express.

Spoilers Are the New Black
Are we too squeamish about our right to be shocked?

Orange Is the New Black, Netflix