Esse est percipi. To be is to be perceived. – George Berkeley 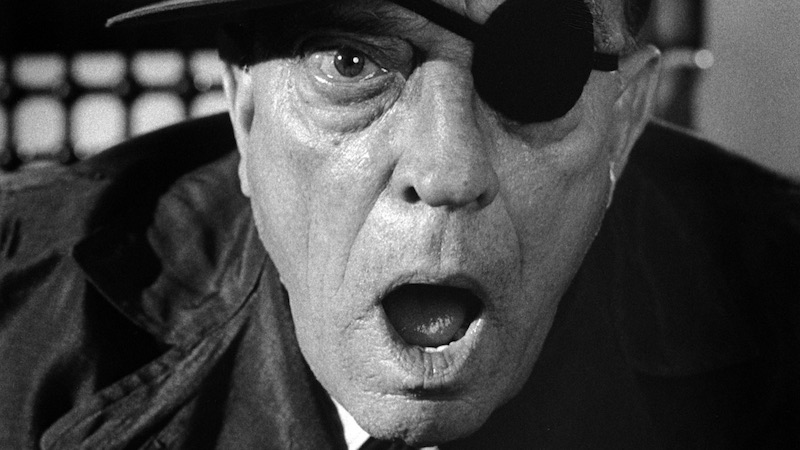 This philosophy was the driving force behind Samuel Beckett’s 1965 film, “Film.” But assigning a precise meaning to the work seems to subvert Beckett’s aspirations for it – that it would exist purely as an art form, without needing to be defined or questioned, and that it would look into the human experience. The result of Beckett’s hope was a 22-minute film that existed on such a strange plane that no one, not even the film’s star, could understand it.

There were many players involved in “Film.” First and foremost was Beckett himself, a world-renowned playwright and author, who conceived the idea and wrote the script. Barney Rosset, the founder of Grove Press who is credited with introducing American readers to Beckett’s work, produced the movie. Alan Schneider, a theatre director who directed a bulk of Beckett’s stage works, logically directed it. Boris Kaufman, an award-winning cinematographer, worked the camera. And the film starred Buster Keaton, a silent-era film great who fell into a multiyear alcoholic slump before reappearing and continuing to work. (For Chronicle founder Louis Black's take on Keaton and Beckett, see “Page Two,” Oct. 4, 1996.)

Decades later, Ross Lipman dealt himself into the phenomenon. Formerly the senior film restorationist at UCLA, Lipman developed an obsession with “Film” that would send him on a seven-year journey to interview Beckett’s friends and collaborators and produce his own self-titled “kino-essay” about the original work. The documentary, Notfilm, is roughly six times the length of “Film” and strives to unpack the mystery and intrigue surrounding the strange 1965 work.

Was the project a failure? Beckett himself called it an “interesting” one. Writing about the film, director Alan Schneider remembers the critics “clobbered … or ignored” the work. But he also remembers the film later being released to generally favorable reviews, which he wrote is “par for the Beckettian course” – to be slammed, then lauded as a classic. And thus is the general consensus in the cult-like awe, intrigue, and annoyance surrounding “Film.” It is generally appreciated by film buffs, ignored by pop culture, and neutrally regarded by Beckett fans. Mainly, it just creates confusion.

In Notfilm, Lipman has carefully curated the answers to some of the lingering questions about “Film.” The documentary is in black and white and mainly features Lipman’s voice speaking over images and videos, with snippets of interviews he conducted during his research to break up the monologue. In the 122-minute work, Lipman unpacks the method, reasoning, and personality behind the film; his focus on the information over presentation elevates Notfilm beyond documentary and into an essay-like territory.

The Harry Ransom Center, home to a Beckett collection, is screening both “Film” and Notfilm on Thursday, June 16, 7pm, to kick of its Summer Film Series. For tickets and more info, see www.hrc.utexas.edu/events.