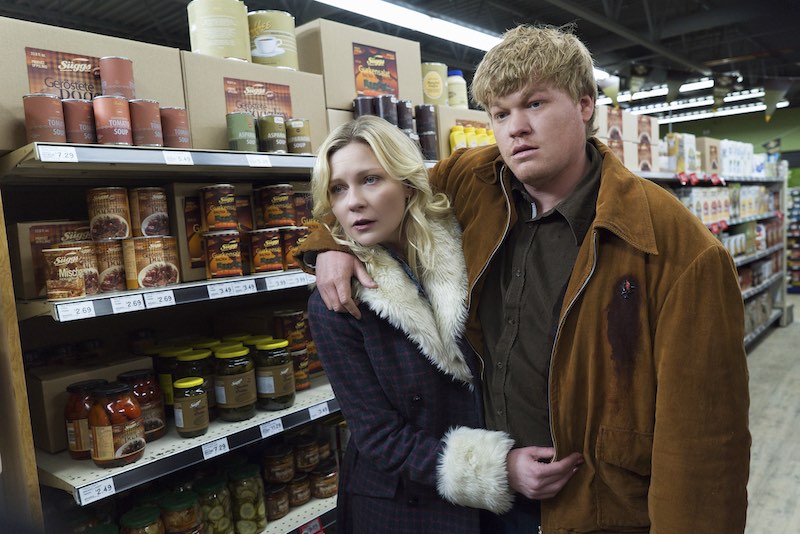 Like the show, the Fargo soundtrack will feature both original and licensed work, including some covers from Austin artists, like White Denim and Shakey Graves, as well as some vocals from Hawley. Overall, they hoped to capture the spirit of the Seventies with their selections while paying proper homage to the show’s source material – meaning the movie Fargo as well as the Coen brothers’ other films. If what we’ve heard so far is any indication, the album will not disappoint.

The Fargo TV showed concluded its second season late last year. It was a prequel to the first season and set in Minnesota in the Seventies. During the panel, Hawley stressed how important establishing the time period was to this season’s story (much more so than to season 1.) For that, he relied heavily on the score, but with one added challenge: Avoid seeming too on-the-nose. “We’ve seen a lot from the Seventies, but usually what we see is New York or L.A. in the Seventies,” said Hawley. “We don’t see a lot of the Seventies in the middle of the country where it’s both 1979 and also kind of 1972 and also a little bit 1964 and also a bit 1945.” The show’s character themes provided Hawley an avenue to explore that further. “I started to think about Ed the butcher,” he said, referring to the character Ed Blumquist, played by Jesse Plemons. “[Ed] literally wants to grow up to be his dad. So he’s probably stuck in the Fifties on some level or early Sixties,” he said. “I started to think of Burl Ives as the sound of Ed, and I found that great "One Hour Ahead of the Posse" song that we used for his montage when he was cleaning up the blood in the garage.” Other licensed pieces made their way in as Hawley decided to dive into the Coen brothers’ repertoire. “I decided that I wanted covers of songs from Coen brothers movies,” said Hawley. “So we started reaching out to artists to do that, and we got some really great artists to record – a lot of Austin groups, actually,” he said. “White Denim did 'Just Dropped In (to See What Condition My Condition Was In)' as a disco song, and Shakey Graves did a song for us from Oh, Brother.” They also got Jeff Tweedy to cover the José Feliciano song featured in the film Fargo, which was Tweedy’s pick. “I wanted [Tweedy] to do "Peaceful Easy Feeling,” said Hawley. “But it turns out Jeff Tweedy famously hates the Eagles. So I couldn’t talk him into it.” (I know – he “hates the fucking Eagles, man.” It’s just too perfect.)

Digital downloads and CDs are available now. You can also check out the White Denim cover on Soundcloud.