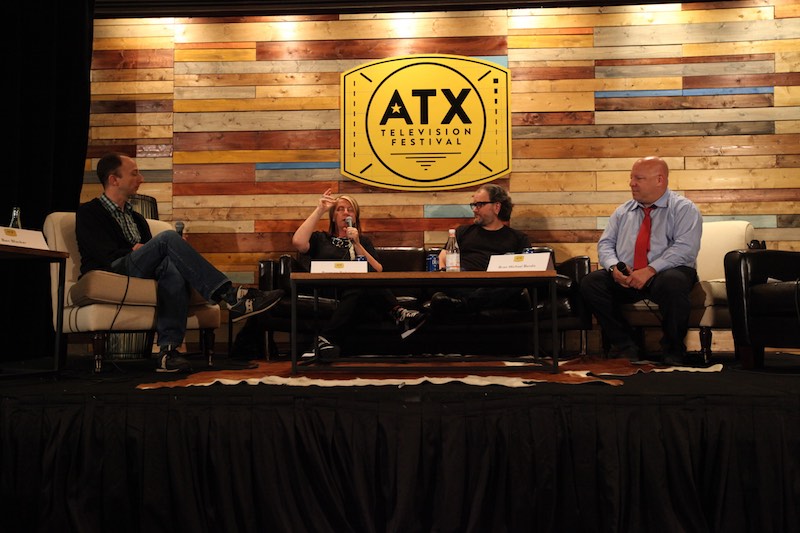 Moderator Ben Blacker (co-creator of The Writers Panel podcast) talked with the panelists about what makes a solid comic adaptation. Early in the session, everyone agreed that being a slave to the source material wasn’t the answer. But a good adaption captures the spirit of a comic. (They cited Preacher as a good example.) “Any story worth telling has a point to it, and the point shouldn’t be lost,” said Bendis. Consider Jessica Jones and CSI. “Marg Helgenberger, who does CSI, talked about how her character never changes. Like her character never learns anything. It’ll be year 11, and [Helgenberger’s character] is still like, ‘Ooo, fibers!’” he said. “There are people who are very comforted by that storytelling. I’m not discounting it.” But that wouldn’t work for Jessica Jones, whose psychological journey is the point of the story. Focusing on Jones' cases, the action scenes, or some high concept would have missed the point. “And I don’t mean to poop on the competitor, but that’s what was wrong with Batman v Superman,” he said. “The point of Batman versus Superman is light versus dark. Hope versus nihilism. When they’re both dark, there is no fight.”

One good way to stay on point: get a showrunner who can translate the magic between a comic book writer and artist to a television production and writing team. Bendis talked about some of the challenges inherent with that. “When me and Mike Oeming, who co-created Powers, are alone in our basement, I’ll think of something gross, and then he’ll draw it, and we’ll giggle,” said Bendis. “And it’s just us, and it’s an indie comic, and nobody cares.” But when Sony asks for a Powers television season “more like the comic” including “all the weird stuff” (like a Powers-themed sex club), it gets a bit more awkward. “Now, I have this lovely woman from props coming to me with dildos going, ‘Which one do you want?’” he said. As Grillo-Marxuach sees it, that’s where the showrunner comes in – figuratively speaking. “Showrunning is an art, and it’s also a science. And for me it’s an art of clarity,” said Grillo-Marxuach. “When you’re a writer on a comic book you can talk to the artist directly. You can settle it out.” But a TV show has a big team. “A showrunner’s primary job is to be clear about the vision,” he said.

The panel closed with a Q&A, during which Bendis highlighted a simple fact: Only people who love comics make good adaptations. “You can’t be making all these comic book movies and TV shows and look at [the comics] in a derogatory fashion. You should worship them, and love them like a child,” he said. “Never speak ill of them.”